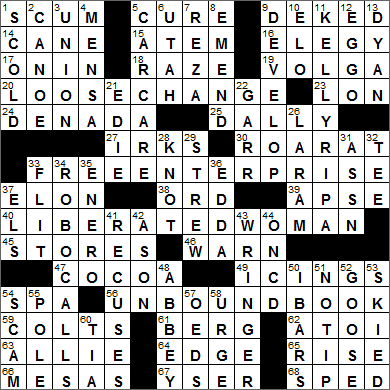 Today’s Wiki-est, Amazonian Googlies
Across
1. Scrubbing Bubbles target SCUM
The bathroom cleaner that we know today as Scrubbing Bubbles was introduced back in 1968 under the more prosaic brand name Dow Bathroom Cleaner.

9. Faked on the ice DEKED
A deke, also known as a dangle, is a technique used to get past an opponent in ice hockey. “Deke” is a colloquial shortening of the word “decoy”.

16. Somber verse ELEGY
An elegy is a mournful poem or funeral song, also known as a dirge. Perhaps the most famous elegy in the English language is that written by Thomas Gray, completed in 1750. His “Elegy Written in a Country Churchyard” is the source of many oft-quoted phrases, including:

19. Russian river VOLGA
The Volga is the longest river in Europe, and is considered the national river of Russia.

23. Chaney of horror LON
Lon Chaney, Sr. played a lot of crazed-looking characters in the days of silent movies. He did much of his own make-up work, developing the grotesque appearances that became his trademark, and earning himself the nickname “the man of a thousand faces”. Most famous were his portrayals of the title characters in the films “The Hunchback of Notre Dame” (1923) and “The Phantom of the Opera” (1925).

24. “Gracias” response DE NADA
“Nada” is the Spanish word for “nothing”. “De nada” translates literally from the Spanish as “of nothing”, and is used to mean “you’re welcome” or “don’t mention it”. The French have the same expression “de rien”, also translating to “of nothing” and used the same way.

38. Former California fort ORD
Fort Ord was an army post on Monterey Bay in California named after a General Ord, established in 1917 and closed in 1994. The fort was in a spectacular location with miles of beachfront, and it also had that lovely California weather.

39. Sanctuary recess APSE
The apse of a church or cathedral is a semicircular recess in an outer wall, usually with a half-dome as a roof and often where there resides an altar. Originally apses were used as burial places for the clergy and also for storage of important relics.

47. Chocolaty concoction COCOA
The beverages hot cocoa and hot chocolate differ from each other in that the latter contains cocoa butter, whereas the former does not.

59. Stable youngsters COLTS
There are lots of terms to describe horses of different ages and sexes, it seems:

61. Floating ice mass BERG
An iceberg is a large piece of freshwater ice that is floating freely after having broken off from a glacier or ice shelf. Out use of “iceberg” comes from the Dutch word for the same phenomenon “ijsberg”, which translates literally as “ice mountain”.

62. Yours, in France A TOI
“À toi” is the French term for “yours”, when talking to someone with whom one is familiar. “À toi” literally means “to you”.

64. Jigsaw puzzler’s starting place EDGE
The original jigsaw puzzles were created by painting a picture on a sheet of wood and then cutting the picture into small pieces using a jigsaw, hence the name. Today, almost all jigsaw puzzles are pictures glued onto cardboard. The puzzle pieces are then die-cut, and there’s no jigsaw involved at all.

66. Southwestern plateaus MESAS
“Mesa” is the Spanish for “table” and is of course is how we get the term “mesa” that describes the geographic feature. A mesa is similar to a butte. Both are hills with flat tops, but a mesa has a top that is wider than it is tall. A butte is a much narrower formation, taller than it is wide.

67. Belgian river YSER
The Yser originates in northern France and flows through Belgium into the North Sea. The Yser is often associated with WWI as it figured in a major battle early in the conflict. In the first three months of the war, the German Army pushed almost completely through Belgium, inflicting heavy losses on the Belgian Army as the defenders were forced to fight a fast-moving rearguard action. The Germans were intent on pushing right through Belgium and across France in a “race to the sea”. But the Belgians, with the help of their Allies, decided to make a final stand at the Yser Canal in an effort to prevent the Germans reaching the French ports of Calais and Dunkirk. The 22-mile long defensive line was chosen at the Yser because the river and canal system could be flooded to create a barrier that might be defended. The plan was successful and the front was “stabilized”. As we now know, millions of lives were lost over the coming years with very little movement of that battle line.

Down
1. Admonish SCOLD
A skald was one of a group of poets associated with the old courts of Scandinavia and the Icelandic leaders during the time of the Vikings. The modern English word “scold” comes from the “skald”, reflecting the mocking tone often prevalent in the poetry of the time.

2. Paddled boat CANOE
The boat called a canoe takes its name from the Carib word “kenu” meaning “dugout”. It was Christopher Columbus who brought “kenu” into Spanish as “canoa”, which evolved into our English “canoe”.

4. Brilliant bunch MENSA
If you ever had to learn Latin, as did I, “mensa” was probably taught to you in Lesson One as it’s the word commonly used as an example of a first declension noun. Mensa means “table”. The Mensa organization for folks with high IQs was set up in Oxford, England back in 1946. To become a member, one is required to have an IQ that is in the top 2% of the population.

6. Canyonlands National Park site UTAH
Canyonlands is a magnificent National Park in southeast Utah, not far from Moab. The canyons in the park, and the associated mesas and buttes, were formed mainly by the Colorado and Green Rivers.

7. Exiled Shah Mohammed __ Pahlavi REZA
The last Shah of Iran was Mohammed-Reza Shah Pahlavi, as he was overthrown in the revolution led by the Ayatollah Khomeini in 1979. The post-revolution government sought the extradition of the Shah back to Iran while he was in the United States seeking medical care (he had cancer). His prolonged stay in the United States, recovering from surgery, caused some unrest back in Iran and resentment towards the United States. Some say that this resentment precipitated the storming of the US Embassy in Tehran and the resulting hostage crisis.

8. Edit, as text EMEND
The verb “to amend” means “to change for the better, put right, alter by adding”. The related verb “to emend” is used more rarely and mainly in reference to the editing of professional writing. Both terms are derived from the Latin “emendare” meaning “to remove fault”.

11. Morning TV host KELLY RIPA
When Kelly Ripa secured the co-host spot on morning television with Regis Philbin, she was still acting in “All My Children” in a role she had been playing for over ten years. After a year of holding down two jobs, she eventually gave up the acting job.

12. “Leggo my __!” EGGO
Eggo is the brand name of a line of frozen waffles made by Kellogg’s. When they were introduced in the 1930s, the name “Eggo” was chosen to promote the “egginess” of the batter. “Eggo” replaced the original name chosen, which was “Froffles”, created by melding “frozen” and “waffles”.

13. Actress Cannon DYAN
The actress Dyan Cannon is perhaps best known for playing Alice in the 1969 film “Bob & Carol & Ted & Alice”, for which she received a Best Actress Oscar nomination. Cannon is also famous for having been on Cary Grant’s long list of wives, from 1965 to 1968 (and he was 33 years her senior).

21. Singer Brickell married to Paul Simon EDIE
Edie Brickell is a singer-songwriter from Dallas, Texas. Brickell has been married to fellow singer Paul Simon since 1991.

22. Teri of “Mr. Mom” GARR
The lovely Teri Garr had a whole host of minor roles in her youth, including appearances in nine Elvis movies. Garr’s big break came with the role of Inga in “Young Frankenstein”, and her supporting role in “Tootsie” earned Garr an Academy Award nomination. Sadly, Teri Garr suffers from multiple sclerosis. She is a National Ambassador for the National Multiple Sclerosis Society.

“Mr. Mom” is a 1983 comedy written by John Hughes, starring Michael Keaton and the great Teri Garr. The movie is all about an engineer in the auto industry in Detroit who loses his job and then takes over the running of the household while his wife heads back to work. It’s funny stuff …

31. Part of LPGA: Abbr. ASSN
The Ladies Professional Golf Association (LPGA) was founded in 1950 by a group of 13 lady golfers, and today it is the oldest ongoing women’s sports professional organization in the US.

34. Autodialed campaign messages ROBOCALLS
Political calls, including robocalls, are exempt from regulation by the Federal Trade Commission (FTC), so we can’t stop them by putting our phone numbers on the “Do Not Call Registry”.

36. Old Norse poetic work EDDA
The Poetic Edda and Prose Edda are two ancient works that are the source for much of Norse mythology. Both Eddas were written in the 13th century, in Iceland.

42. “You have __”: obstetrician’s news A SON
In Latin, the word for midwife is “obstetrix”. “Obstetrix” translates more literally as “one who stands opposite” i.e. the one opposite the woman giving birth. The Latin term gives rise to our modern word “obstetrics” used for the branch of medical science concerned with childbirth.

43. Old laundry-squeezing device WRINGER
Oh how I remember my mother passing the clothes through the wringer out in our backyard. When did I get to be so old …?

48. Cloister ABBEY
Cloisters are usually such beautifully peaceful areas. They are found as part of religious buildings in particular. Cloisters are rectangular open spaces surrounded by covered walkways that are attached to other structures.

53. Maneuvered among moguls SKIED
Moguls are the series of bumps in the surface of snow that arise naturally as a succession of skiers make turns on a slope.

57. Ref. works that take up a lot of shelf space OEDS
The “Oxford English Dictionary” (OED) contains over 300,000 “main” entries and 59 million words in total. It is said it would take a single person 120 years to type it out in full. The longest entry for one word in the second edition of the OED is the verb “set”. When the third edition was published in 2007, the longest entry for a single word became the verb “put”. Perhaps not surprisingly, the most-quoted author in the OED is William Shakespeare, with his most quoted work being “Hamlet”. The most-quoted female author is George Eliot (aka Mary Ann Evans).

60. Familia member TIA
In Spanish, an aunt (tia) is a member of the family (la familia).