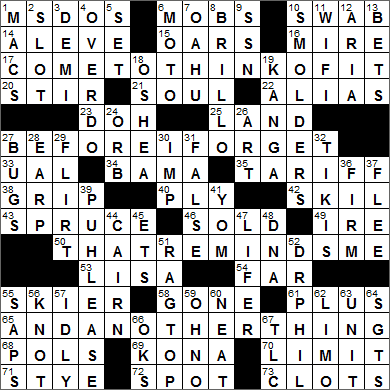 Today’s Wiki-est, Amazonian Googlies
Across
1. Windows precursor MS-DOS
MS-DOS (short for Microsoft Disk Operating System) was the main operating system used by IBM-compatible PCs in the eighties and for much of the nineties.

20. Hullabaloo STIR
Our word “hullabaloo” meaning a “commotion” is a derivative of an older term “hollo-ballo”. “Hollo-ballo” was a word used for an uproar in the north of England and Scotland.

21. Barry White genre SOUL
Barry White was a singer-songwriter from Texas who grew up in South Central Los Angeles. White has a rough start to life and ended up in jail at 17 for stealing Cadillac tires. It was while in prison that White was inspired to begin a musical career, after listening Elvis Presley on record singing “It’s Now or Never”. White’s greatest chart success was in the mid-seventies, with recordings such as “Never, Never Gonna Give Ya Up” and “You’re the First, the Last, My Everything”.

22. Dossier cover? ALIAS
A “dossier” is a collection of papers with information about a person or subject. “Dossier” is a French term meaning “bundle of papers”. The French word comes from the word “dos” meaning “back”. It is suggested that the term “dossier” arose as there was usually a label on the back (dos) of the bundle.

23. “Boy, am I dumb!” D’OH!
“The Simpsons” is one of the most successful programs produced by the Fox Broadcasting Company. Homer Simpson’s catchphrase is “D’oh!”, which became such a famous exclamation that it has been included in the Oxford English Dictionary (OED) since 2001. “D’oh!” can be translated as “I should have thought of that!”

33. Airline with the MileagePlus frequent flier prog. UAL
United Airlines (UAL) has a complicated history, but can trace its roots back to Aviation Enterprises, founded in 1944 and later called Texas International. The first use of the “United” name in the company’s history was when airplane pioneer William Boeing merged his Boeing Air Transport with Pratt & Whitney to form the United Aircraft and Transport Corporation (UATC) in 1929. The Air Mail Act of 1934 required that UATC be broken up into United Aircraft (which became United Technologies), the Boeing Aircraft Company and United Air Lines.

34. Ole Miss rival BAMA
The athletic teams of the University of Alabama (“Bama”) are nicknamed the Crimson Tide, a reference to the team colors of crimson and white.

40. Charmin layer PLY
Charmin is a brand of toilet paper made by Procter & Gamble.

42. Black & Decker rival SKIL
Skil Power Tools sold their first “Skilsaw” back in 1924, for $160. Despite almost a century of inflation, a Skilsaw can be purchased today for a fraction of that original price.

Black & Decker is a manufacturer of power tools that was founded in Baltimore in 1910 by S. Duncan Black and Alonzo G. Decker. The company’s first product was the first portable electric drill, the basic design of which we still use today.

58. “__ Girl”: 2014 Affleck film GONE
“Gone Girl” is a thriller novel written by Gillian Flynn that was first published in 2012. The story tells of a man whose wife has disappeared, with the reader not being certain if the husband is involved in the disappearance. The book was adapted into a movie of the same name released in 2014, starring Ben Affleck.

69. Hawaiian coffee district KONA
Kona coffee is cultivated on the Big Island of Hawaii, on the slopes of Mauna Loa and Hualalai, two of the five active volcanoes on the island. Coffee plants were brought to Kona in 1828 and late in the 19th century, coffee became a viable and worthwhile crop. Today Kona is a one of the most expensive and popular coffees in the world.

72. Kiddie-lit dog SPOT
In the “Dick and Jane” series of book for children, Spot was a cat back in the thirties, but then became a dog in later editions.

The “Dick and Jane” beginning reader series of books was originally written by William S. Gray and Zerna Sharp and first published in the 1930s. There are claims of plagiarism from an earlier pair of books published throughout the British Commonwealth that featured the characters Dick and Dora. Indeed, I grew up in the British Isles with “Dick and Dora”, and always assumed that “Dick and Jane” were somehow their American cousins!

Down
1. Apple Store array MACS
Macintosh (also “Mac”) is a line of computers from Apple Inc. The first Mac was introduced in 1984, and I remember someone showing me one at work in those early days of personal computing. There was a piece of white plastic connected to the main computer by a cord, and I was amazed when the guy showed me that it controlled where the cursor was on the screen. My colleague told me that this lump of plastic was called “a mouse” …

6. Con __: briskly, on scores MOTO
The musical term “con moto” indicates that a passage should be played quickly, briskly, The term translates from Italian as “with motion”.

7. Iolani Palace site OAHU
The ‘Iolani Palace in downtown Honolulu is unique within this country. It is the only royal palace in the US that was used as an official residence by a reigning monarch. The Kingdom of Hawaii was overthrown in 1893 so the palace was used by successive governments even after Hawaii was awarded statehood in 1959. The palace has been a public museum since 1978.

8. Estracell sponge brand BRILLO
Brillo Pad is a soapy, steel wool pad, patented in 1913. The company claims that the name “Brillo” is derived from the Latin word for “bright”. The problem with the assertion is that no such word exists in Latin, although the prefix brill- is used for words meaning “bright” in Italian, French and Spanish.

Phishing is the name given to the online practice of stealing usernames, passwords and credit card details by creating a site that deceptively looks reliable and trustworthy. Phishers often send out safe-looking emails or instant messages that direct someone to an equally safe-looking website where the person might inadvertently enter sensitive information. “Phishing” is a play on the word “fishing”, as in “fishing for passwords, PIN numbers etc.”

11. Surfing convenience WI-FI
“Wi-Fi” is nothing more than a trademark, a trademark registered by an association of manufacturers of equipment that use wireless LAN (Local Area Network) technology. A device labeled with “Wi-Fi” has to meet certain defined technical standards, basically meaning that the devices can talk to each other. The name “Wi-Fi” suggests “Wireless Fidelity”, although apparently the term was never intended to mean anything at all.

18. Milo of the movies O’SHEA
Milo O’Shea was a great Irish character actor from Dublin who has appeared in everything from “Romeo and Juliet” to “The West Wing”. Sadly, O’Shea passed away in 2013 in New York City.

19. She adopted Tigger KANGA
Kanga is a friend of A. A. Milne’s “Winnie-the-Pooh”, and is a kangaroo. She is the mother of Roo, who appears more frequently in the storyline.

24. Top of a scepter, perhaps ORB
A scepter is a ceremonial staff often held by a monarch.

The most famous gunfight in the history of the Old West has to be the Gunfight at the O.K. Corral, which took place in Tombstone, Arizona. Strangely enough, the fight didn’t happen at the O.K. Corral, but played out six doors down the street in a vacant lot next to a photography studio.

32. Maori carvings TIKIS
A tiki is a large carving of wood or stone resembling a human form, found in Polynesian cultures. The carvings often mark out boundaries of sites sacred to the locals.

The Māori are the indigenous people of New Zealand. The Māori are eastern Polynesian in origin and began arriving in New Zealand relatively recently, starting sometime in the late 13th century. The word “māori” simply means “normal”, distinguishing the mortal human being from spiritual entities.

41. __ Kippur YOM
Yom Kippur is the holiest day of the year for the Jewish people and is also known as the Day of Atonement.

44. Stone monument CAIRN
A cairn is a man-made pile of stones that can have various uses. A cairn might be a prosaic trail marker, or a distinctive landmark or monument. Our term “cairn” derives from the Gaelic “carn” meaning “rocky hill, heap of stones”.

45. UFO fliers, purportedly ETS
One might speculate that an unidentified flying object (UFO) might be flown by an extraterrestrial (ET).

48. Forensic investigator’s molecule DNA
I’ve always been fascinated by the fact that the DNA of living things is so very similar across different species. Human DNA is almost exactly the same for every individual (to the degree of 99.9%). However, those small differences are sufficient to distinguish one individual from another, and to determine whether or not individuals are close family relations.

52. Adviser who was a regular “Oprah” guest DR PHIL
Dr. Phil (McGraw) met Oprah Winfrey when he was hired to work with her as a legal consultant during the Amarillo Texas beef trial (when the industry sued Oprah for libel over “Mad Cow Disease” statements). Oprah was impressed with Dr. Phil and invited him onto her show, and we haven’t stopped seeing him since!

55. Enervates SAPS
“To enervate” is to have someone feel drained of energy. “Enervare” is the Latin for “to weaken”.

62. Wedding rental LIMO
The word “limousine” actually derives from the French city of Limoges. The area around Limoges is called the Limousin, and it gave its name to a cloak hood worn by local shepherds. In early motor cars, a driver would sit outside in the weather while the passengers would sit in the covered compartment. The driver would often wear a limousin-style protective hood, giving rise to that type of transportation being called a “limousine”. Well, that’s how the story goes anyway …

64. LAPD ranks SGTS
The Los Angeles Police Department (LAPD) is the third largest local law enforcement agency in the country, after New York PD and Chicago PD. Among other things, LAPD is famous for creating the first Special Weapons and Tactics (SWAT) team in the US, in 1965.