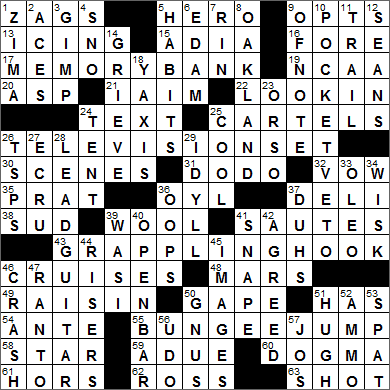 CROSSWORD SETTER: Michael Dewey
THEME: Shot at Last … each of today’s themed answers ends with a type of basketball SHOT:

Today’s Wiki-est, Amazonian Googlies
Across
13. Hockey violation ICING
I know nothing about hockey, but I just read that “icing” is an illegal play. It occurs when a player shoots the puck across two red lines or more (the red lines drawn across the ice), in effect taking a really long shot at goal. The idea behind the rule is to stop teams just sitting back and taking long shots at goal.

15. 1998 Sarah McLachlan hit ADIA
Sarah McLachlan is singer/songwriter from Halifax, Nova Scotia who lives in Vancouver. In 1997, McLachlan married Ashwin Sood, the drummer in her band. Apparently the 1998 hit song “Adia”, that she co-wrote and recorded, was intended as an apology to her best friend … for stealing her ex-boyfriend and then marrying him!

16. Pebble Beach cry FORE!
No one seems to know for sure where the golfing term “fore!” comes from. It has been used at least as far back as 1881, and since then has been called out to warn other golfers that a wayward ball might be heading their way. My favorite possibility for its origin is that it is a contraction of the Gaelic warning cry “Faugh a Ballagh!” (clear the way!) which is still called out in the sport of road bowling. Road bowling is an Irish game where players bowl balls along roads between villages, trying to reach the end of the course in as few bowls as possible, just like in golf!

Pebble Beach Golf Links, located just south of Monterey, California, is a public course. It was the first public golf course to be chosen as the top course in the country by “Golf Digest”.

19. Elite Eight letters NCAA
In the NCAA Division I Basketball Championship, the teams remaining at various stages of the tournament are known as:

20. Nile snake ASP
The venomous snake called an asp was a symbol of royalty in Ancient Egypt.

25. Price-regulating blocs CARTELS
A “cartel” is a group of independent businesses who cooperate to regulate production, pricing and marketing of their common product(s).

31. Extinct flightless bird DODO
The dodo was a direct relative of the pigeon and dove, although the fully-grown dodo was usually three feet tall. One of the reasons the dodo comes to mind when we think of extinction of a species, is that it disappeared not too long ago and humans were the reason for its demise. The dodo lived exclusively on the island of Mauritius and when man arrived, we cut back the forests that were its home. We also introduced domestic animals, such as dogs and pigs, that ransacked the dodo’s nests.

35. Start to fall? PRAT-
“Prat” is a relatively new word for me, a slang term for the buttocks apparently. A “pratfall” is when someone falls and lands on the buttocks, usually as part of a comedy routine.

36. Olive __ OYL
“Thimble Theater” was the precursor comic strip to the famous “Popeye” drawn by E. C. Segar. Before Popeye came into the story, the brother and sister characters Castor Oyl and Olive Oyl were the main protagonists. And then along comes a sailor …

38. South, in Soissons SUD
Soissons is an ancient town in northern France located about 60 miles northeast of Paris.

41. Fries in a little butter SAUTES
“Sauté” is a French word. The literal translation from the French is “jumped” or “bounced”, a reference to the tossing of food while cooking it in a frying pan.

48. Rover exploration site MARS
There have been several rovers sent to Mars from Earth. The Soviet Union’s Mars 2 landed in 1971, and failed. Mars 3 landed the same year, and ceased operation just 20 seconds after landing. NASA’s Sojourner landed in 1997 (what a great day that was!) and operated from July through September. The British rover Beagle 2 was lost six days before its scheduled entry into the Martian atmosphere. NASA’s Spirit landed in 2004, and operated successful for over six years before getting trapped in sand and eventually ceasing to communicate. NASA’s Opportunity also landed in 2004, and it is still going. And then NASA’s Curiosity made a spectacular, hi-tech landing in 2012 and is continuing to explore the planet today.

55. Thrill-seeker’s leap BUNGEE JUMP (giving “jump shot”)
The first Bungee jump using the modern latex cord was from the Clifton Suspension Bridge in Bristol, England. It was an illegal jump, with all five jumpers getting arrested soon after “hitting” the ground.

59. In unison, on a score A DUE
“A due” is a musical term meaning “together”, and literally translates from Italian as “by two”.

60. Steadfast belief DOGMA
A dogma is a set of beliefs, with the plural being “dogmata” (or “dogmas”, if you’re not a pedant like me!)

61. __ d’oeuvres HORS
An hors d’oeuvre is the first course in a meal. “Hors d’oeuvre” translates from French as “apart from the work”, really meaning “not the main course”.

62. Revolutionary sewer ROSS
Legend has it that Betsy Ross made the first American flag for General George Washington. However, this story only surfaced during the centennial celebrations of 1876, and although Betsy Ross was indeed one of several flag makers in Philadelphia in the days of George Washington, sadly there’s no definitive evidence that Ross provided that first Stars and Stripes.

Down
1. MillerCoors malt beverage ZIMA
Zima is a clear alcoholic beverage with about the same strength as beer. Zima is sold in beer bottles but is marketed as “not” a beer. It has a lemon-lime flavor and is referred to as an “alcopop”, a portmanteau word from “alcohol” and “pop”.

3. Hitch in one’s step GIMP
Both “hitch” and “gimp” are words for a limp or a limping gait.

6. Red-wrapped cheese EDAM
Edam cheese takes its name from the Dutch town of Edam in North Holland. The cheese is famous for its coating of red paraffin wax, a layer of protection that helps Edam travel well and prevents spoiling. You might occasionally come across an Edam cheese that is coated in black wax. The black color indicates that the underlying cheese has been aged for a minimum of 17 weeks.

7. __ Tin Tin RIN
The original Rin Tin Tin was a real-life dog, a puppy discovered by a GI in a bombed-out kennel in France during WWI. The soldier named the pup Rin Tin Tin, the same name as a puppet given to American soldiers for luck. On returning to the US, “Rinty” was trained by his owner and was spotted doing tricks by a film producer. Rinty featured in some films, eventually getting his first starring role in 1923 in the silent movie “Where the North Begins”. Legend has it that this first Rin Tin Tin died in the arms of actress Jean Harlow. Not a bad way to go …

8. One end of California’s Bay Bridge OAKLAND
The San Francisco-Oakland Bay Bridge is actually a pair of bridges that crosses the San Francisco Bay. The western span of the bridge connects San Francisco to Yerba Buena Island, and the eastern span connects Yerba Buena Island to Oakland. Part of the eastern span of the Bay Bridge collapsed during the 1989 Loma Prieta earthquake. That same span was reconstructed and opened for traffic in 2013. The original span had two separate decks for eastbound and westbound traffic. The new span is a single deck, and as such is the widest bridge in the world.

10. Rarely used Oval Office strategy POCKET VETO
In the US, “pocket veto” is the term used for the legal maneuver that kills a piece of legislation when the President takes no action at all. The Constitution requires that the President sign or veto (i.e. a “regular veto”) any legislation within ten days while Congress is in session. If Congress adjourns within the 10-day period, then the bill does not become law. It is this inaction by the President when Congress is out of session that is called a “pocket veto”.

12. Connery and Penn SEANS
Sean Connery is most famous for playing the original James Bond in the successful series of movies. Back in his native Scotland, Connery is very active in politics and is a member of the Scottish Nationalist Party. He actively campaigns for Scottish independence from Britain and has stated that he believes Scotland will achieve that goal within his own lifetime. That seems less likely now, given the result of the recent Scottish referendum on independence.

Actor Sean Penn is a two-time Oscar winner, for his roles in “Mystic River” released in 2003 and “Milk” released in 2008. Penn’s celebrity on screen is only matched with his fame off the screen. Apart from his “big name” marriages to singer Madonna and actress Robin Wright, Penn is also well known for political and social activism. He perhaps inherited some of his political views from his father, actor and director Leo Penn. As an actor, Leo refused to “name names” in front of the House Un-American Activities Committee and so was blacklisted in Hollywood and had to move into directing to put bread on the table. In later years as a director he gave his son Sean his first acting role, in a 1974 episode of “Little House on the Prairie”.

27. Color similar to sand ECRU
The shade called ecru is a grayish, yellowish brown. The word “ecru” comes from French and means “raw, unbleached”. “Ecru” has the same roots as our word “crude”.

29. Rustic writing IDYLL
An “idyll” (also “idyl”) is a short poem with a pastoral theme, usually depicting the scene in romantic and idealized terms. The word comes from the Greek “eidyllion”, which literally translates to “little picture” but was a word describing a short, poem with a rustic theme.

41. Hogwarts potions master SNAPE
Severus Snape is a character in the Harry Potter novels, played by the wonderful Alan Rickman on the big screen.

50. Bearded antelopes GNUS
A gnu is also known as a wildebeest, and is an antelope native to Africa. “Wildebeest” is actually the Dutch word for “wild beast”.

51. Romcom actor Grant HUGH
The English actor Hugh Grant’s full name is Hugh John Mungo Grant. Grant’s breakthrough came with his leading role in 1994’s “Four Weddings and a Funeral”. That was a fabulous performance. Sadly, I think Grant has basically been playing the same character ever since …

56. Japanese salad veggie UDO
Udo is a perennial plant native to Japan that is known taxonomically as Aralia cordata. The stems of udo are sometimes boiled up and served in miso soup.