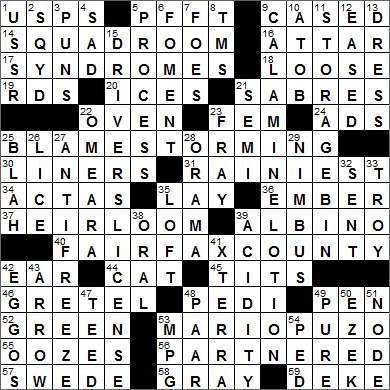 Today’s Wiki-est, Amazonian Googlies
Across
1. Org. whose website has a Track & Manage option USPS
The US Postal Service (USPS) is a remarkable agency in many ways. For starters, the government’s right and responsibility to establish the Post Office is specifically called out in Article One of the US constitution. Also, the first postmaster general was none other than Benjamin Franklin. And the USPS operates over 200,000 vehicles, which is the largest vehicle fleet in the world.

9. Checked out CASED
The term “case the joint” is American slang dating back at least to 1915, meaning to examine a location with the intent of robbing it. The origins of the phrase are apparently unknown.

14. Copper mine? SQUAD ROOM
“To cop” was northern British dialect for “to seize, catch”. This verb evolved in the noun “copper”, describing a policeman, someone who catches criminals. “Copper” is often shortened to “cop”.

16. Floral perfume ATTAR
Attar is a fragrant essential oil obtained from flowers. The term may particularly refer to attar of roses.

17. Predictable patterns SYNDROMES
A “syndrome” is a pattern of symptoms indicating a particular condition, often medical or social in nature. The term comes from the Greek “syndromos” meaning “place where several roads meet”.

21. Some Buffalo wings SABRES
The Buffalo Sabres joined the National Hockey League in the 1970-71 season. The team took the name “Sabres” following a fan contest.

22. Subway device OVEN
The SUBWAY chain of fast food restaurants is the largest single-brand restaurant in the world. I’m a big fan of SUBWAY sandwiches, especially the toasted ones …

23. Like bodegas, to Span. speakers FEM
“Bodega” is a feminine (fem.) noun, in Spanish.

“Bodega” is the Spanish term for a winery, or these days for a grocery store.

31. Like the Southeast, vis-à-vis other U.S. regions RAINIEST
Recent studies show that the rainiest region of the US is the Southeast, with Mobile, Alabama logging the most rainfall of any city in the country. The driest part of the country is the Southwest, with Yuma, Arizona getting fewer days of precipitation than any other American city.

39. Moby-Dick, e.g. ALBINO
In Herman Melville’s 1851 novel “Moby-Dick”, the animal named in the title is an albino sperm whale.

40. Where Langley is FAIRFAX COUNTY
Fairfax County, Virginia is home to several US intelligence agencies, most notably the CIA (in Langley). Also headquartered there is the National Geospatial-Intelligence Agency (in Springfield) and the National Counterterrorism Center (in McLean).

42. Jug part EAR
The handle of a jug might be referred to as its ear.

44. Critter in a clowder CAT
Here are some colorful collective nouns:

57. Angström, e.g. SWEDE
The angstrom is a very small unit of length, equal to one ten-billionth of a meter. As such a small unit, the angstrom is used to measure the size of atoms and molecules. The unit is named for the Swedish physicist Anders Jonas Ångström.

59. Fake DEKE
A deke, also known as a dangle, is a technique used to get past an opponent in ice hockey. “Deke” is a colloquial shortening of the word “decoy”.

Flew in from Miami Beach BOAC
Didn’t get to bed last night
On the way the paper bag was on my knee
Man, I had a dreadful flight
I’m back in the USSR
You don’t know how lucky you are, boy
Back in the USSR, yeah

By the time the Beatles recorded “Back in the U.S.S.R”, they were having a lot of problems working with each other. The song was recorded in 1968, with the band formally dissolving in 1970. Tensions were so great during the recording of “Back in the U.S.S.R” that Ringo Starr actually stormed out saying that he had quit, and the remaining three Beatles made the record without Ringo. Drums were played mainly by Paul McCartney, but there are also drum tracks on the final cut by both George Harrison and John Lennon. Interesting, huh?

British Overseas Airways Corporation (BOAC) was one of the two airlines that were merged in 1974 to form British Airways (the other was British European Airways).

6. Incite FOMENT
To foment is to promote the growth of.

9. Zinc compound CALAMINE LOTION
Calamine is mainly zinc oxide, with a small percentage of iron oxide. Calamine is incorporated into a lotion that is used for many things, including treatment of sunburn and itching.

22. 1998 Masters champion O’MEARA
Mark O’Meara is an American golfer from Goldsboro, North Carolina. He is known as one of the American players who competes in international tournaments more than most, and has a reputation as a real gentleman all around the world.

26. Tiny parasites LICE
Lice are small wingless insects of which there are thousands of species, three of which are human disease agents. The three kinds of lice affecting humans are head lice, body lice and pubic lice. Most lice feed on dead skin found on the body of the host animal, although some feed on blood. Ick …

27. Engine protector ANTIFREEZE
The antifreeze that we put into our cars has ethylene glycol as the active ingredient. Ethylene glycol is dangerous stuff, and is very poisonous. Ingestion causes calcium oxalate crystals to form in the kidneys. It sounds like a horrible way to go …

29. Halo NIMBUS
Nimbus (plural nimbi) is another word for a halo, or an aura. “Nimbus” is Latin, and can also translate as “cloud”.

33. Home to Paris TROY
In Greek legend, Paris was the son of the king of Troy. Paris eloped with Helen, Queen of Sparta, and this act was a major trigger for the Trojan War. Also it was Paris who fatally wounded Achilles by shooting him in the heel with an arrow.

41. Nissan whose last model year is 2015 XTERRA
The Nissan Xterra is a compact SUV built in Smyrna, Tennessee (and in Brazil). The vehicle is named for the XTERRA series of off-road triathlon races, for which Nissan served as sponsor for several years.

42. “Some things are too delicious to share” food EGGOS
Eggo is the brand name of a line of frozen waffles made by Kellogg’s. When they were introduced in the 1930s, the name “Eggo” was chosen to promote the “egginess” of the batter. “Eggo” replaced the original name chosen, which was “Froffles”, created by melding “frozen” and “waffles”.

43. Hood defense ARROW
Robin Hood is a figure from English folklore, celebrated in story and song. Some stories suggest that Robin Hood the outlaw was actually a real nobleman, the Earl of Huntington. Robin Hood’s famous companion was Maid Marian. Interestingly, the legend of Maid Marian (full name Lady Marian of Leaford) had been around for centuries before she became associated with Robin Hood starting in the 1700s.

48. Allen’s successor PAAR
Jack Paar was most famous as the host of “The Tonight Show”, from 1957 to 1962. When he died in 2004, “Time” magazine wrote that Paar was “the fellow who split talk show history into two eras: Before Paar and Below Paar”. Very complimentary …

Steve Allen was a television personality who always seemed to be on air in the fifties, sixties and seventies. Famously, Allen was the original host of “The Tonight Show”. He also played a little piano and composed over 10,000 songs, perhaps more than anyone in history. His best known song is probably “This Could Be the Start of Something Big”.

50. O.T. book EZEK
The Book of Ezekiel (Ezek.) in the Old Testament (OT) is a collection of the preachings of the prophet Ezekiel.