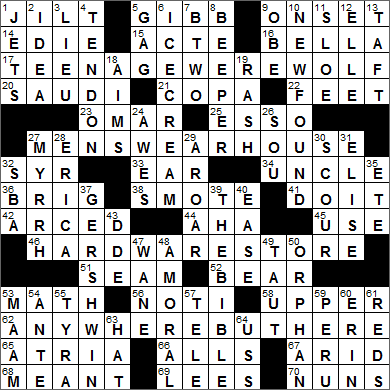 CROSSWORD SETTER: Kevin Christian & Andrea Carla Michaels
THEME: Were There, Sounds Like … each of today’s themed answers contains a syllable that is or sounds like “were”.

17A. 1957 Michael Landon horror film role TEENAGE WEREWOLF
27A. “You’re going to like the way you look” clothing chain MEN’S WEARHOUSE
46A. Place to copy keys HARDWARE STORE
62A. “Not in my backyard” ANYWHERE BUT HERE

Today’s Wiki-est, Amazonian Googlies
Across
1. Reject, as a sweetheart JILT
To “jilt” someone with whom you have a relationship is to drop them suddenly or callously. “Jilt” is an obsolete noun that used to mean “harlot” or “loose woman”.

5. Bee Gees family name GIBB
The Brothers Gibb (hence, the name “The Bee Gees”) were born in England but grew up and started their musical careers in Australia. They moved back to Manchester in the north of England as youths, and there hit the big time.

17. 1957 Michael Landon horror film role TEENAGE WEREWOLF
“I Was a Teenage Werewolf” is a 1957 horror movie starring Michael Landon in the title role. The film was a breakthrough role for Landon, and two years later he landed the role of Little Joe on TV’s “Bonanza”.

20. __ Arabia SAUDI
The Kingdom of Saudi Arabia is the largest Arab country in the Middle East and is the world’s largest oil producer, home to the world’s largest oil reserves. The Saudi dynasty started in central Arabia in 1744 when the secular leader Muhammad ibn Saud joined forces with the Islamic scholar and Imam, Muhammad ibn Abd-al-Wahhab. At the time, Saud was a ruler of a town near Riyadh and he was determined to bring “true” Islam to the Arabian peninsula. Since 1744 the fortunes of the Saudi family have risen and fallen, but it is that same family who rules what we know today as Saudi Arabia.

21. Nightclub in a Manilow song COPA
The Copacabana of song is the Copacabana nightclub in New York City (which is also the subject of the Frank Sinatra song “Meet Me at the Copa”). The Copa opened in 1940 and is still going today although it is struggling. The club had to move due to impending construction and is now “sharing” a location with the Columbus 72 nightclub.

Barry Manilow’s real name is Barry Alan Pincus. Barry took his mother’s family name, Manilow, as the time of his Bar Mitzvah. When he was young, Manilow attended the Juilliard performing arts school, and then practiced his craft on the New York City music circuit. He worked in the sixties and seventies writing jingles for advertisements. “Like a good neighbor, Statefarm is there …”, that’s the work of Mr. Manilow!

22. Tootsies FEET
“Tootsy” is slang for “foot”. Apparently the term evolved from “footsy”.

23. Poet Khayyám OMAR
Omar Khayyam was a Persian with many talents. He was a poet as well as an important mathematician, astronomer and physician. A selection of his poems were translated by one Edward Fitzgerald in a collection called “Rubaiyat of Omar Khayyam”. Here are some lines from “Rubaiyat” …

And that inverted Bowl we call The Sky,
Whereunder crawling coop’t we live and die,
Lift not thy hands to It for help–for it
Rolls impotently on as Thou or I.

25. Exxon’s ex-name ESSO
The brand name Esso has its roots in the old Standard Oil company as it uses the initial letters of “Standard” and “Oil” (ESS-O). The Esso brand was replaced by Exxon in the US, but ESSO is still used in many other countries.

32. Isr. neighbor SYR
The modern state that we know as Syria was established after WWI as a French mandate. Syria was granted independence from France in 1946.

34. “I give up!” UNCLE!
To “say uncle” is an American expression meaning to submit or yield. Its usage dates back to the early 1900s, but nobody seems to know how “uncle!” came to mean “stop!”

36. Sailor’s confinement BRIG
A brig, short for brigantine, is a type of ship. It was the use of brigantines as prison ships that led to the use of “brig” as the word for a jail or prison cell on a seagoing vessel.

42. Curved like a rainbow ARCED
Sunlight shining through airborne water droplets can produce rainbows. The water droplets act as little prisms, dispersing the white light into its constituent colors. Sometimes we see double rainbows. If we look carefully, the order of the colors in the first and second arcs is reversed.

52. Animal on the California state flag BEAR
The original California flag was simply a lone red star on a white background, and was carried by rebels fighting for freedom from Mexican rule in 1836. Ten years later a new flag was used, the original Grizzly Bear Flag and precursor to today’s state flag. That first use of a bear was in a design by William L. Todd, a nephew of Abraham Lincoln’s wife, Mary Todd.

53. Trig or calc MATH
Trigonometry (trig.) and calculus (calc.) are realms of study in the world of mathematics (math.).

65. Skylit courtyards ATRIA
In modern architecture an atrium (plural “atria” or “atriums”) is a large open space usually in the center of a building and extending upwards to the roof. The original atrium was an open court in the center of an Ancient Roman house. One could access most of the enclosed rooms of the house from the atrium.

69. Jeans brand LEES
The Lee company famous for making jeans was formed in 1889, by one Henry David Lee in Salina, Kansas.

Down
1. New York footballers JETS
Just like the New York Giants, the New York Jets are based in New Jersey, headquartered in Florham Park. The Jets and the Giants have a unique arrangement in the NFL in that the two teams share Metlife Stadium in East Rutherford, New Jersey. The Jets were an AFL charter team, formed in 1959 as the Titans of New York. The Titans changed their name to the Jets in 1963.

6. Banana split ingredient ICE CREAM
The first banana split was created in Latrobe, Pennsylvania in 1904. This particular sundae was the idea of David Stickler, a young apprentice pharmacist at the Tassel Pharmacy’s soda fountain.

9. U.K. honor OBE
The Most Excellent Order of the British Empire is an order of chivalry in the UK that was established in 1917 by King George V. There are five classes within the order, which are in descending seniority:

11. Wild plum SLOE
The sloe is the fruit of the blackthorn bush, and the main flavoring ingredient in sloe gin.

12. Fashion magazine ELLE
“Elle” magazine was founded in 1945 in France and today has the highest circulation of any fashion magazine in the world. “Elle” is the French word for “she”. “Elle” is published monthly worldwide, although you can pick up a weekly edition if you live in France.

13. 300-pound president TAFT
William Howard Taft may have been the 27th President of the United States, but his lifelong ambition was to be Chief Justice of the Supreme Court. President Taft was able to realize that dream in 1921, eight years after losing his bid for re-election as president. As Chief Justice, this former US President swore in two new presidents: Calvin Coolidge (in 1925) and Herbert Hoover (in 1929). William Howard Taft is also remembered as the most obese president. In the last year of his presidency, he weighed about 340 pounds (he was 5 feet 11 inches tall). Twelve months after leaving the White House, President Taft had dropped 80 pounds and substantially lowered his blood pressure.

19. Calamine lotion target RASH
Calamine is mainly zinc oxide, with a small percentage of iron oxide. Calamine is incorporated into a lotion that is used for many things, including treatment of sunburn and itching.

27. Gift from the Magi MYRRH
Frankincense and myrrh are both tree resins, exuded when certain species of tree are damaged. The harvested resins are used to make essentials oils for perfumes, and are also burned to give off a pleasant fragrance.

“Magi” is the plural of the Latin word “magus”, a term applied to someone who was able to read the stars. Hence, magi is commonly used with reference to the “wise men from the East” who followed the star and visited Jesus soon after he was born.

31. Beethoven’s “Für __” ELISE
“Für Elise” is a beautiful piece of music written by Beethoven, and is also known as “Bagatelle in A Minor”. “Für Elise” means simply “For Elise”, but sadly no one knows for sure the identity of the mysterious dedicatee.

32. Agcy. that aids start-ups SBA
The Small Business Administration (SBA) is a government agency with the mission of assisting small businesses. The SBA doesn’t give loans itself, but it does act as a guarantor under the right circumstances. The SBA was set up in 1953, and isn’t a favorite with fiscal conservatives.

37. “Rhapsody in Blue” composer GERSHWIN
George Gershwin was a remarkable composer in so many ways, not least in that he was respected for both his popular and classical compositions. Gershwin’s best known works for orchestra are the magnificent “Rhapsody in Blue” from 1924 and “An American in Paris” from 1928. Another noted work is the opera “Porgy and Bess” that was first performed in 1935. Surprisingly, Porgy and Bess was a commercial failure, and so Gershwin moved to Hollywood and started composing very successful film scores. He was only 38 years old when he died in 1937, from a brain tumor.

39. Holy Scripture THE BIBLE
The Bible is the biggest-selling book of all time, with annual sales running at about 100 million copies.

43. Ike’s initials DDE
President Eisenhower was born in Denison, Texas and given the name David Dwight Eisenhower, but by the time he made it to the White House he was going by the name Dwight D. Eisenhower (DDE). Growing up, his family called him Dwight, and when “Ike” enrolled in West Point he himself reversed the order of his given names.

59. Lima is its capital PERU
Lima is the capital city of Peru. Lima was founded in 1535 by the Spanish conquistador Francisco Pizarro, who named it “la Ciudad de los Reyes” (the City of Kings). He chose this name because the decision to found the city was made on January 6th, the feast of the Epiphany that commemorates the visit of the three kings to Jesus in Bethlehem.

60. Ireland, poetically ERIN
“Éire”, is the Irish word for “Ireland”. “Erin” is an anglicized version of “Éire” and actually corresponds to “Éirinn”, the dative case of “Éire”.

61. Chianti and Merlot REDS
Chianti is a red wine from the Chianti region of central Tuscany in Italy. Historically, Chianti was stored in a characteristically bulbous bottle wrapped in a straw basket. However, the pragmatists have won the day and regular wine bottles tend to be used nowadays.

63. Sombrero, e.g. HAT
In English we think of a sombrero as a wide-brimmed hat, but in Spanish “sombrero” is the word for any hat. “Sombrero” is derived from “sombra” meaning “shade”.

64. Battleship letters USS
The acronym “USS” stands for “United States Ship”. The practice of naming US Navy vessels in a standard format didn’t start until 1907 when President Theodore Roosevelt issued an executive order that addressed the issue.