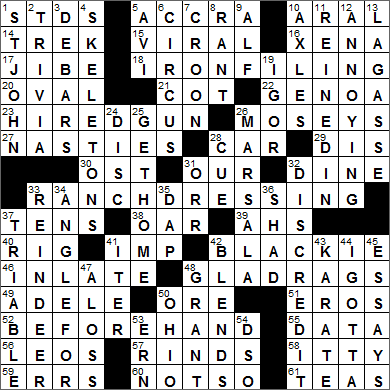 52A. In advance, and, literally, where the starts of the answers to starred clues might go BEFOREHAND

Today’s Wiki-est, Amazonian Googlies
Across
5. West African capital ACCRA
Accra sits on Ghana’s coast and is a major seaport as well as the country’s capital city. The name “Accra” comes from a local word “Nkran” meaning “ants”, a name chosen because of the large number of anthills found in the area when the city was founded.

10. Kazakhstan border sea ARAL
The Aral Sea is a great example of how man can have a devastating effect on his environment. In the early sixties the Aral Sea covered 68,000 square miles of Central Asia. Soviet Union irrigation projects drained the lake to such an extent that today the total area is less than 7,000 square miles, with 90% of the lake now completely dry. Sad …

The Republic of Kazakhstan in Central Asia is the world’s largest landlocked country. Kazakhstan was the last of the former Soviet Republics (SSRs) to declare itself independent from Russia.

15. Like much invasive software VIRAL
A computer virus has characteristics very similar to a virus found in nature. It is a small computer program that can copy itself and can infect another host (computer).

16. Lawless role XENA
The Xena character, famously played by New Zealander Lucy Lawless, was introduced in a made-for-TV movie called “Hercules and the Amazon Women”. Lawless reprised the role in a series called “Hercules: The Legendary Journeys”. Xena became so popular that a series was built around her character, with Lawless retained for the title role. The fictional Xena supposedly came from the “non-fictional” Greek city of Amphipolis.

18. *One of a group of particles used to demonstrate a magnetic field IRON FILING (giving “iron hand”)
The phrases “iron hand” and “iron fist” are used as metaphors for strict or harsh control. Both are commonly used as part of the more expansive phrase “iron hand in a velvet glove”, meaning “autocratic rule shrouded in a softer exterior”.

20. Churchill Downs shape OVAL
Churchill Downs is a thoroughbred racetrack located in Louisville, Kentucky that is famous for hosting the Kentucky Derby each year. The track is named for John and Henry Churchill who once owned the land on which the course was built.

Salame (note the “e” at the end) is an Italian sausage that is traditionally associated with the peasant classes. The meat in the sausage is preserved with salt, and it can be hung and stored for as long as ten years. The name “salame” comes from “sale”, the Italian word for salt, and “-ame”, a suffix indicating a collective noun. Our English word “salami” is actually the Italian plural for “salame”.

28. Mercury or Saturn CAR
The Mercury brand of car was made by Ford from 1938 until 2011. Mercury was introduced by Henry Ford’s son Edsel Ford. Mercury vehicles were positioned as being more luxurious that the regular Ford models, and more economical than Ford’s high-end Lincoln models.

Saturn was a brand of car introduced by General Motors in 1985 in response to the success of Japanese imports in North America. Saturn cars were built by a subsidiary of the company that operated relatively independently, with its own assembly plant in Tennessee and its own retailer network.

29. Put down DIS
“Dis” is a slang term meaning “insult” that originated in the eighties, and is a shortened form of “disrespect” or “dismiss”.

Leipzig is a city in Germany located just under 100 miles south of Berlin. The name “Leipzig” comes from the Slavic word ”Lipsk” which means “settlement where the linden trees stand”. Linden trees are also called lime trees and basswood trees.

For thine is the kingdom,
The power, and the glory,
For ever and ever,
Amen

33. *Salad topping RANCH DRESSING (giving “ranch hand”)
Ranch dressing has been the best selling salad dressing in the country since 1992. The recipe was developed by Steve Henson who introduced it in the fifties to guests on his dude ranch, Hidden Valley Ranch in Northern California. His ranch dressing became so popular that he opened a factory to produce packets of ranch seasoning that could be mixed with mayonnaise and buttermilk. Henson sold the brand for $8 million in 1972.

37. Yellow Monopoly bills TENS
The commercial game of Monopoly is supposedly a remake of “The Landlord’s Game” created in 1903 by a Quaker woman called Lizzie Phillips. Phillips used her game as a tool to explain the single tax theory of American economist Henry George. The Landlord’s Game was first produced commercially in 1924. The incredibly successful derivative game called Monopoly was introduced in 1933 by Charles Darrow, who became a very rich man when Parker Brothers bought the rights to the game just two years later in 1935.

42. Boston __: ’50s TV detective BLACKIE
Boston Blackie is a character who first appeared in a short story called “The Price of Principle” by author Jack Boyle. He was a criminal, a safecracker and a jewel thief, although in adaptations for radio, TV and film he transitioned into a detective. He was played by actor Kent Taylor in the fifties TV show “The Adventures of Boston Blackie”.

46. Arriving after curfew IN LATE
Our word “curfew” comes from an Old French word meaning “cover fire”. In medieval days a bell would be ring in the evenings as a signal to bank the hearths in preparation for sleeping. The intent was to prevent uncontrolled fires starting from fireplaces that were not tended during the night.

48. *Party clothes GLAD RAGS (giving “glad hand”)
“To glad hand”, meaning “to extend a welcome” has been around as an expression since the end of the 1800s, although it was used less cynically back then. Then along came politicians …

49. Winner of six 2011 Grammys ADELE
Adele is the stage name of English singer Adele Adkins. Adele’s debut album is “19”, named after the age she was during the album’s production. Her second album was even more successful than the first. Called “21”, the second album was released three years after the first, when Adele was three years older.

51. Arrow-shooting god EROS
Eros was the Greek god of love, the Greek counterpart of the Roman god Cupid.

56. Some summer births LEOS
Leo is the fifth astrological sign of the Zodiac. People born from July 23 to August 22 are Leos.

57. Brie coverings RINDS
Brie is a soft cheese, named after the French region from which it originated. Brie is similar to the equally famous (and delicious) camembert.

Down
1. According to Christian tradition, Bk. of Revelation author ST JOHN
In the Christian tradition, John the Apostle was one of the twelve followers of Jesus who were called the Apostles. John lived longer than all of the other Apostles and was the only one who did not die a martyr. John wrote the Gospel of John in the New Testament, as well as three Epistles of John and the Book of Revelation.

2. “Jeopardy!” material TRIVIA
Trivia are things of little consequence. “Trivia” is the plural of the Latin word “trivium” which means “a place where three roads meet”. Now that’s what I call a trivial fact …

“Jeopardy” first went on the air in 1964, and is another successful Merv Griffin creation. But it took the introduction of Alex Trebek as host in order to bring the show into the big times. Trebek has been host since 1984.

5. Prefix for the birds AVI-
The prefix “avi-” means “bird-related” as in “aviculture”, the breeding of birds.

7. Sing like Bing CROON
The singer Bing Crosby was a great lover of the game of golf. Crosby had just finished up 18 holes on a course in Spain in 1977 when he suffered a massive heart attack on the final green. Crosby’s last words were “That was a great game of golf, fellas.”

9. 1920s-’30s politico Landon ALF
Alf Landon was the Governor of Kansas from 1933-37, and was the Republican Party’s nominee against FDR in the 1936 Presidential election. He is remembered as the candidate who “disappeared” after winning the nomination. He rarely traveled during the campaign, and made no appearances at all in its first two months. FDR famously won by a landslide, with Landon only winning the states of Maine and Vermont. He wasn’t even able to carry his home state of Kansas.

10. Turnpike toll units AXLES
Back in the 15th century a “turnpike” was a defensive barrier across a road. By the 17th century the term was used for a barrier that stopped travellers until a toll was paid. By the 18th century a turnpike (sometimes “pike”) was the name given to a road with a toll.

13. “Kick it up a notch!” chef LAGASSE
Emeril Lagasse is an American chef, born in Massachusetts. Lagasse first achieved notoriety as executive chef in Commander’s Palace in New Orleans. Now famous for his television shows, his cuisine still showcases New Orleans ingredients and influences. Lagasse started using his famous “Bam!” catchphrase in order to keep his crew awake during repeated tapings of his show.

19. Movie lab helper IGOR
In the world of movies, Igor has been the assistant to Dracula, Frankenstein and Young Frankenstein among others. Igor is almost invariably portrayed as a hunchback.

24. Brake component DISC
The drum brake was invented in 1902 by Louis Renault (founder of Renault, the automobile company). In a drum brake, there is a set of brake shoes that usually presses on the inner surface of the drum to slow down rotation. Nowadays, the disc brake system is more popular, a design which uses brake pads instead of brake shoes.

25. Finish a commute GET HOME
Our verb “to commute”, meaning “to go back and forth to work”, ultimately derives from the Latin “commutare”, meaning “to often change”. Back in the late 1800s, a “commutation ticket” was a season pass, so named because it allowed one to “change” one kind of payment into another. Quite interesting …

26. Veal dish wine MARSALA
Marsala is a seaport lying in the very west of Sicily. If you visit Marsala, you’ll find what’s called “vintage” Marsala wine, a “regular” red wine. If you buy a bottle of Marsala at your local store though, it will be a fortified wine, wine with a higher alcohol content.

31. Legend on the ice ORR
Bobby Orr is regarded as one of the greatest hockey players of all time. By the time he retired in 1978 he had undergone over a dozen knee surgeries. At 31 years of age, he concluded that he just couldn’t skate anymore. Reportedly, he was even having trouble walking …

33. Sven of “Frozen” is one REINDEER
“Frozen” is a 2013 animated feature from Walt Disney Studios that is based on the Hans Christian Andersen fairy tale “The Snow Queen”.

35. Skip along the water DAP
“To dap” is to skip or bounce across the surface of the water. Dapping is also the name given to the fishing technique of letting a baited hook fall gently onto the water’s surface.

36. Roe source SHAD
The shad is also known as the river herring. The eggs (roe) of the female shad are prized as a delicacy in the Eastern US.

45. Bacon products ESSAYS
The English philosopher and statesman Francis Bacon wrote a celebrated and respected collection of essays called “The Essayes”, first published in 1597. My favorite of these essays is “Of Simulation and Dissimulation”, which observes:
Dissimulation, in the negative; when a man lets fall signs and arguments, that he is not, that he is… Simulation, in the affirmative; when a man industriously and expressly feigns and pretends to be, that he is not.

54. Brit. military award DSO
The Distinguished Service Order (DSO) is a British military award that is usually presented to officers with the rank of Major or higher.