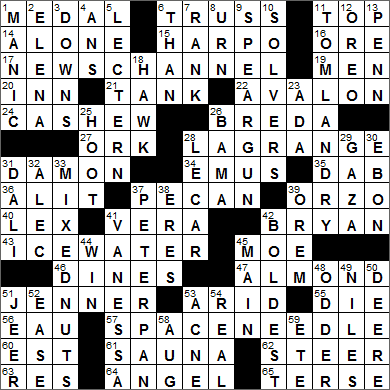 CROSSWORD SETTER: Robert E. Lee Morris
THEME: Mixed Nuts … each of today’s long answers contains a NUT, but the name of the nut has been MIXED up:

47A. As hidden in 11-Down, one of this puzzle’s 33-Down ALMOND
11D. He and Don Shula share the NFL record of 36 playoff games coached TOM LANDRY (hiding a mixed “ALMOND”)

Today’s Wiki-est, Amazonian Googlies
Across
15. Silent brother of comedy HARPO
Harpo Marx was the second oldest of the Marx brothers. Harpo’s real name was Adolph, and he earned his nickname because he played the harp. Famously he didn’t speak on screen, a routine he developed after reading a review that he performed really well when he just didn’t speak!

17. 1996 Fox launch NEWS CHANNEL (hiding a mixed “CASHEW”)
The Fox News Channel was launched in 1996 by Australian media mogul Rupert Murdoch. According to Nielsen statistics, Fox now attracts more viewers than any other cable news channel. Also according to Nielsen, the median viewer of Fox News is over the age of 65.

26. Netherlands city near the Belgian border BREDA
Breda is a Dutch city in the southern part of the country. One of Breda’s former residents was Charles II of England, who lived there in exile for nine years while Oliver Cromwell was virtual dictator of England, Scotland and Ireland.

27. Mork’s planet ORK
“Mork & Mindy” was broadcast from 1978 to 1982. We were first introduced to Mork (played by Robin Williams) in a special episode of “Happy Days”. The particular episode in question has a bizarre storyline culminating in Fonzie and Mork having a thumb-to-finger duel. Eventually Richie wakes up in bed, and alien Mork was just part of a dream! Oh, and “Nanu Nanu” means both “hello” and “goodbye” back on the planet Ork. “I am Mork from Ork, Nanu Nanu”. Great stuff …

28. Italian mathematician who was a contemporary of Euler LAGRANGE
Joseph-Louis Lagrange was an Italian mathematician and astronomer who spent much of his working life at the Prussian Academy of Sciences in Berlin, as the successor of Leonhard Euler. Lagrange spent the latter part of his life in Paris, where he was very much involved in the introduction of the metric system.

Leonhard Euler was a brilliant Swiss mathematician and physicist, a pioneer in the fields of logarithms and graph theory.

31. “Good Will Hunting” actor DAMON
“Good Will Hunting” was the movie that gave both Matt Damon and Ben Affleck their big break in films, and deservedly so. Affleck and Damon are actually distant cousins who lived two blocks from each other in Cambridge, Massachusetts where the pair spent their teen years. The two friends wrote the film’s screenplay and of course took starring roles, alongside Robin Williams and Minnie Driver. Affleck and Damon won an Academy Award for the screenplay. What a great success story, eh?

34. Flightless birds EMUS
The large flightless birds called emus make sounds by manipulating inflatable necks sacs. The sac is about a foot long, has a thin wall and allows the bird to emit a booming sound. The type of sound emitted is the easiest way to differentiate between male and female emus.

39. Rice-shaped pasta ORZO
Orzo is pasta that has been formed into granular shapes, much like barley. And indeed, “orzo” is the Italian word for “barley”.

41. Aloe __ VERA
Aloe vera has a number of alternate names that are descriptive of its efficacy as a medicine. These include the First Aid plant, Wand of Heaven, Silent Healer and Miracle Plant.

42. “Breaking Bad” star Cranston BRYAN
The actor Bryan Cranston is best known today for playing Walter White in the crime drama “Breaking Bad”. Prior to joining that incredibly successful show, Cranston play Hal in the sitcom “Malcolm in the Middle”. He also had a recurring role on “Seinfeld” from 1994 to 1997, as Jerry’s dentist Dr. Tim Whatley.

43. Restaurant freebie ICE WATER
Not for much longer here in California, I’d say …

45. One of the Pep Boys MOE
The Pep Boys automotive stores started out in Philadelphia when four friends pooled their money ($800, in 1921) to open an auto parts store. The name “Pep” was taken from a Pep Valve grinding compound that they carried. They changed the name to Pep Boys as at least one local used to refer to the store as “the boys at Pep”. One of the friends cashed out of the business, and the remaining trio eventually rebranded the store as “The Pep Boys – Manny, Moe & Jack”.

51. 1976 Olympics decathlon gold medalist JENNER
The American athlete Bruce Jenner, owes his fame to his great victory in the decathlon at the 1976 Olympic Games in Montreal. Jenner parlayed his victory into a career for himself in front of the cameras. He has made many television appearances over the years, and had a starring role in the reality show “Keeping Up with the Kardashians” starting in 2007, as Jenner’s third wife was Kris Kardashian. More recently, Jenner hit the headlines when he announced that he was transitioning his gender to female.

56. __ Claire EAU
Eau Claire, Wisconsin is named for the Eau Claire River, which in turn was named by French explorers. The explorers had been travelling down the muddy Chippewa River and diverted into the clear water of what is now called the Eau Claire River. They exclaimed “Voici l’eau claire!” meaning “Here is clear water!” The French phrase “Voici l’eau claire” is now the city’s motto that appears on the city seal.

57. Seattle landmark SPACE NEEDLE (hiding a mixed “PECAN”)
The famed Seattle landmark called the Space Needle was built for the 1962 World’s Fair. It stands at a height of 605 feet, and was once the tallest structure west of the Mississippi River.

61. Spa offering SAUNA
As my Finnish-American wife will tell you, “sauna” is a Finnish word, and is correctly pronounced “sow-nah” (with “sow” as in the female pig).

Down
2. Justice Kagan ELENA
Elena Kagan was the Solicitor General of the United States who replaced Justice John Paul Stevens on the US Supreme Court. That made Justice Kagan the first female US Solicitor General and the fourth female US Supreme Court justice. I hear she is a fan of Jane Austen, and used to reread “Pride and Prejudice” once a year. Not a bad thing to do, I’d say …

7. General, e.g. RANK
The military rank of general originated in the in the 1570s from the rank of “captain general”, which was a captain with broader responsibilities and control.

11. He and Don Shula share the NFL record of 36 playoff games coached TOM LANDRY (hiding a mixed “ALMOND”)
Although Tom Landry was a football player, he is best known as the head coach for the Dallas Cowboys. As coach he had a run of 20 consecutive winning seasons, a record that has yet to be broken. Landry had an impressive record during WWII as well. He completed a tour of 30 missions as co-pilot in a B-17 Flying Fortress in Europe, and survived a crash landing in Belgium. In his days with the Dallas Cowboys, Landry was noted for wearing a fedora hat, and there is even an image of that famous hat on his tombstone in Texas State Cemetery. He passed away in the year 2000.

12. Creme-filled treat OREO
How the Oreo cookie came to get its name seems to have been lost in the mists of time. One theory is that it comes from the French “or” meaning “gold”, a reference to the gold color of the original packing. Another suggestion is that the name is the Greek word “oreo” meaning “beautiful, nice, well-done”.

13. Ivy League school PENN
The University of Pennsylvania (Penn or UPenn) was founded in 1740 by by Benjamin Franklin. Penn was the first school in the country to offer both graduate and undergraduate courses.

26. The Crimson Tide BAMA
The athletic teams of the University of Alabama (“Bama”) are nicknamed the Crimson Tide, a reference to the team colors of crimson and white.

28. Aptly named Renault LE CAR
French automaker Renault made the “mini-like” Renault 5 and sold it as the Renault “Le Car” in North America. My Dad had a Renault 5 back in Ireland …

29. __ Strip GAZA
After the 1948 Arab-Israeli War, the boundaries of the strip of land on the Mediterranean around Gaza were fixed in the Israel-Egypt Armistice Agreement. The boundaries were specifically defined but were not to be recognized as an international border. From 1948, the Gaza Strip was occupied and administered by Egypt, until 1967 when Israel took over occupation following the Six-Day War. In 1993, Israel and the PLO signed the Oslo Accords which handed over administration to the Palestinian Authority, but with Israel retaining control of the Gaza Strip’s airspace, some land borders and its territorial waters. The intent was to further this agreement, but discussions between the parties broke down. Israel withdrew from Gaza in 2005.

32. Actor Baldwin ALEC
Alec Baldwin is the oldest of the acting Baldwin brothers. I think Alec’s big break was playing Tom Clancy’s Jack Ryan in “The Hunt for Red October”, but thank goodness that role was taken over by Harrison Ford for the subsequent Jack Ryan movies. Baldwin is making a name for himself these days playing Jack Donaghy on “30 Rock”, opposite Tina Fey.

37. Broadway flier PETER PAN
“Peter Pan” is a musical adaptation of J.M. Barrie’s 1904 play of the same name. The musical opened on Broadway in 1954, famously starring Mary Martin in the title role. NBC recorded three separate telecasts of the stage production with the original cast, in 1955, 1956 and 1960. NBC broadcast a revived version of the musical in 2014 called “Peter Pan Live!” with Allison Williams playing Peter, and Christopher Walken playing Captain Hook. Unlike the earlier recordings, the 204 version was not well received.

38. Cockney toast starter ‘ERE’S
A Cockney is someone who, according to tradition, is born within the sound of Bow Bells in the center of London. The Cockney accent is usually considered “working class”. Cockney speakers often use a wonderful form of speech called rhyming slang. So, Cockney’s drink a lot of Rosie Lea (tea), climb the apples and pears (stairs) using their plates of meat (feet).

39. Utah city OREM
Orem, Utah was originally known as “Sharon” (a Biblical name), then “Provo Bench”, and in 1914 it was given the family name of a local railroad operator called “Orem”. Orem gave itself the nickname “Family City USA” and sure enough in 2010, “Forbes” rated Orem the 5th best place in the country to raise a family.

41. “Colors of the Wind” singer Williams VANESSA
Vanessa Williams has built quite a career for herself after briefly holding the 1983 Miss America title. Williams is now a successful actress and singer. On the big screen she did a fine job playing the lead opposite Arnold Schwarzenegger in 1996’s “Eraser”. On the small screen she had a major role in the hit comedy “Ugly Betty”. Williams is sometimes confused with fellow actress Vanessa A. Williams who is no relation.

49. Frasier’s brother NILES
In the sitcom called “Frasier”, Niles Crane is the brother of the title character Frasier Crane. Fraiser is played by Kelsey Grammer and Niles is played by David Hyde Pierce. Frasier was originally intended to be an only child in the show’s storyline, but the producers decided to add a brother when they noted that David Hyde Pierce looked remarkably like Kelsey Grammer.

50. Big name on the farm DEERE
John Deere invented the first commercially successful steel plow in 1837. Prior to Deere’s invention, farmers used an iron or wooden plow that constantly had to be cleaned as rich soil stuck to its surfaces. The cast-steel plow was revolutionary as its smooth sides solved the problem of “stickiness”.

59. Somme summer ETE
The Somme is a department in the very north of France, in the Picardy region. The Somme is famous as the site of devastating battles during WWI.