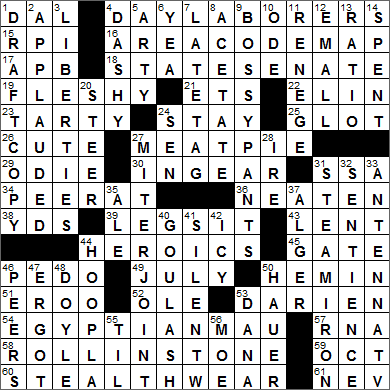 Today’s Wiki-est, Amazonian Googlies
Across
1. Cowboys, on scoreboards DAL
The Dallas Cowboys play in the National Football Conference of the NFL. The Cowboys are famous for a lengthy streak of 20 consecutive winning seasons, from 1966 to 1985. They are the highest-valued sports franchise in the country. The only team in the world that’s worth more money is the UK’s Manchester United soccer team.

15. N.Y. campus that’s home to the Engineers RPI
The Rensselaer Polytechnic Institute (RPI) is a private school in Troy, New York. The university is named after its founder Stephen Van Rensselaer who set up the school in 1824. The goal of RPI has always been the “application of science to the common purposes of life”, an objective set by the founder. Given that, the name for the school’s sports teams is quite apt: the Engineers.

16. Graphic with three-digit numbers AREA-CODE MAP
Area codes were introduced in the 1940s. Back then the “clicks” one heard when dialling a number led to mechanical wear on various pieces of equipment. In order to minimize overall mechanical wear, areas with high call volumes were given the most efficient area codes (lowest number of clicks). That led to New York getting the area code 212, Los Angeles 213 and Chicago 313.

17. Msg. after an escape, perhaps APB
An All Points Bulletin (APB) is a broadcast from one US law enforcement agency to another.

22. Mother of Sam and Charlie Woods ELIN
Elin Nordegren is the ex-wife of Tiger Woods. Nordegren is a native of Sweden, and it was back in Sweden that she was hired as a nanny by the wife of golfer Jesper Parnevik. The job brought her to the US where she became a popular attraction on the professional golfing circuit. Apparently there was a long line of single golfers who wanted to be introduced to her, with Tiger Woods asking for an introduction for a year before he finally got to go out with her. The pair were married in 2004. Tiger and Elin have two children together: Sam Alexis born in 2007, and Charlie Axel born in 2009.

25. Suffix with poly- -GLOT
A “polyglot” is a person who has mastered several languages. The term derives from the Greek “polyglottos”, meaning “speaking many languages”. The prefix “poly-” denotes “many”, and “glotta” is a variant of the Greek “glossa” meaning “language, tongue”.

29. Patient of Dr. Liz ODIE
Odie is Garfield the cat’s best friend and is a slobbery beagle, a character in Jim Davis’s comic strip. Garfield’s vet is Dr. Liz Wilson. Garfield’s owner Jon has a big crush on Liz.

31. Org. with a Retirement Estimator web page SSA
The Social Security Administration (SSA) was set up as part of President Franklin D. Roosevelt’s New Deal. The first person to receive a monthly retirement benefit was Ida May Fuller of Vermont who received her first check for the sum of $22.54 after having contributed for three years through payroll taxes. The New Deal turned out to be a good deal for Ms. Fuller, as she lived to 100 years of age and received a total benefit of almost $23,000, whereas her three years of contributions added up to just $24.75.

38. Furlong’s 220: Abbr. YDS
At one time, an acre was defined as the amount of land a yoke of oxen could plow in a day. This was more precisely defined as a strip of land “one furrow long” (i.e. one furlong) and one furlong wide. The length of one furlong was equal to 10 chains, 40 rods or 220 yards. A area of one furlong times 10 rods was one rood.

43. Time to give up LENT
In Latin, the Christian season that is now called Lent was termed “quadragesima” (meaning “fortieth”), a reference to the forty days that Jesus spent in the desert before beginning his public ministry. When the church began its move in the Middle Ages towards using the vernacular, the term “Lent” was introduced. “Lent” comes from “lenz”, the German word for “spring”.

45. Slalom opening GATE
Slalom is an anglicized version of the Norwegian word “slalam” that translates as “skiing race”. There is a longer version of the traditional slalom that is called giant slalom.

46. Child: Pref. PEDO-
The prefix “pedo-” is Greek in origin, and modifies a word so that it refers to a boy or child.

Our month of July used to be called “Quintilis” in Ancient Rome. “Quintilis” is Latin for “fifth”, and it was the fifth month of the year back then. After the assassination of Julius Caesar, the Roman Senate renamed Quintilis to Julius, in his honor, which evolved into our “July”.

53. Connecticut town in which some “Stepford Wives” scenes were filmed DARIEN
The town of Darien, Connecticut is home to the only ambulance service in the nation that is manned by high school students. Darien EMS – Post 53 is actually a scouting unit, but it still provides emergency care at no cost to patients and is funded by private donations. High school students can legally provide the service because the state of Connecticut permits emergency medical technicians to be certified at the age of 16. Another bit of Darien trivia is that the town was used for exterior shots in the movie “The Stepford Wives”, both the 1975 original and the 2004 remake.

“The Stepford Wives” is a 1972 novel by Ira Levin about a Connecticut community in which the husbands replace their wives with docile robots. There have been two film adaptations of the book, the first released in 1975 and starring Katharine Ross (my favorite). The second movie adaptation, released in 2004, isn’t as good in my opinion, although although Bette Midler plays a great supporting role.

54. Spotted cat EGYPTIAN MAU
The Egyptian Mau is an ancient breed of cat. Illustrations of Egyptian Mau cats have been found in artwork that is over 3,000 years old. Maus can run at over 36 mph, making them the fastest breed of domestic cat.

57. Bio subject RNA
Ribonucleic Acid (RNA) is an essential catalyst in the manufacture of proteins in the body. The genetic code in DNA determines the sequence of amino acids that make up each protein. That sequence is read in DNA by messenger RNA, and amino acids are delivered for protein manufacture in the correct sequence by what is called transfer RNA. The amino acids are then formed into proteins by ribosomal RNA.

59. Calendar abbr. OCT
October is the tenth month in our calendar but was the eighth month in the old Roman calendar, hence the name “Octo-ber”. Back then there were only ten months in the year. “Ianuarius” (January) and “Februarius” (February) were then added as the eleventh and twelfth months of the year. Soon after, the year was reset and January and February became the first and second months.

60. Brand of protective clothing STEALTH WEAR
There is now a category of fashionable clothing that is designed to foil remote surveillance equipment. The designs aim to cover the face and reduce the heat signature of the body. Clothing items also include a pocket that zeroes out a cell phone’s signal.

Down
8. Overlay material ACETATE
An “acetate” is a transparency used on a projector onto which one can write or draw. It is called an “acetate” because it is usually made from cellulose acetate.

11. Fail to deliver RENEGE
To renege on something is to back out of it. It’s a word commonly used in card games like bridge and whist. A renege is when a player doesn’t follow suit, even though there may be a card of the suit led in his/her hand.

13. Pi, but not rho RATIO
The ratio of a circle’s circumference to its diameter is a mathematical constant, which we denote with the Greek letter pi (π). The ratio pi can be used to calculate the area of a disk, by multiplying the constant by the square of the radius ( πr2).

24. 1/100 of a Cambodian riel SEN
The Cambodian riel was first introduced in 1953, and was taken out of circulation by the Khmer Rouge in 1975 when they completely abolished money on taking control of the country. After the Vietnamese invasion of 1978, money was reintroduced and the Cambodian people are still using the “second” riel. The original riel was divided into 100 centimes, but this was changed to 100 “sen” in 1959.

27. Picture frame feature MITER JOINT
A miter joint is one in which two pieces of wood are joined at ninety degrees, with the ends of each individual piece of wood cut at 45 degrees. The four joints in the corners of a picture frame are often miter joints.

33. Airer of classic shows ANTENNA TV
Antenna TV is a digital television network that mainly shows classic TV sitcoms from the fifties through the nineties. The channel uses the slogan “TV How It Was Meant to Be!”

35. Bass, for one ALE
The red triangle on the label of a bottle of Bass Ale was registered in 1875 and is UK Registered Trade Mark (TM) No: 00001, the first trademark issued in the world.

37. “Ragged Dick” author ALGER
Horatio Alger was an American writer of the late nineteenth century. Alger was a prolific writer of novels for young people and creates tales of poor children making it good in the world, achieving the American dream as it were.

40. Hodgepodge GOULASH
Goulash is a soup or stew that is seasoned with spices, especially paprika. It is a national dish of Hungary, and the term “goulash” comes from the Hungarian word “gulyás”, which actually translates as “herdsman”. The original goulash was a meat dish prepared by herdsman.

41. Wreck initiator? SILENT W
There is a silent letter W at the beginning of the word “wreck”.

44. Fuss HOOPLA
The word “hoopla” means “boisterous excitement”. The term probably comes from “houp-là”, something the French say instead of “upsy-daisy”. Then again, “upsy-daisy” probably isn’t something said very often here in the US …

47. Grain disease ERGOT
Ergot is a fungus, or actually a group of fungi, that cause disease in rye and related plants. If human eat ergot-contaminated grain, a condition called ergotism can result. Ergotism is the result of consumption of alkaloids produced by the fungi, alkaloids that can cause seizures and manic behavior. It has even been suggested that the hysteria exhibited by the Salem “witches” was perhaps caused by the ingestion of ergot-contaminated rye.

48. Watson’s creator DOYLE
In the marvelous Sherlock Holmes stories by Sir Arthur Conan Doyle, Holmes’ sidekick Dr. Watson is referred to only by his family name, except for two occasions when it is revealed that his first name is John. However, in a third and final mention, Dr. Watson is called “James” by his wife, apparently a lapse in memory on the part of the author.

50. “Crossworlds” actor Rutger __ HAUER
Rutger Hauer is a Dutch actor, famous in the US for his Hollywood roles. Hauer was born in Breukelen in the Netherlands, the town that gave its name to the borough of Brooklyn in New York City.

53. Tabu creator DANA
Tabu is a whole line of cosmetics and perfumes produced by the House of Dana. The company’s brand names were purchased by a Florida company called Dana Classic Fragrances in 1999.

56. Animated barkeep MOE
Moe Szyslak is the surly bartender and owner of Moe’s Tavern in “The Simpsons” animated TV show. I don’t really care for “The Simpsons”, but Hank Azaria who supplies the voice for the Moe character … him I like …