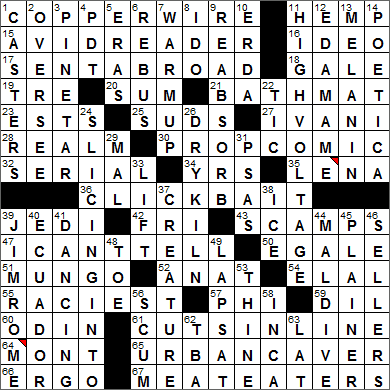 Today’s Wiki-est, Amazonian Googlies
Across
1. Band conductor? COPPER WIRE
Copper is a great conductor of electricity because the outer electrons of the copper atom are easily detached. These outer electrons can detach in a chain reactions enabling them to move with very little resistance in a circuit.

I think that the use of “band” in the clue could refer to “bandwidth”, as in digital information being transmitted across copper wire. I suppose it might also refer to a copper strap used as an electical conductor.

15. Kindle owner, often AVID READER
I bought myself a Kindle Fire HD not that long ago. I’ve started reading e-books for the first time in my life, as well as enjoying other computing options available with the tablet device. I love it …

18. Beaufort scale word GALE
The Beaufort wind scale is named after Irishman Sir Francis Beaufort, a Rear-Admiral in the Royal Navy. Beaufort was a hydrographer as well as a career navy man.

Harpo Marx was the second oldest of the Marx brothers. Harpo’s real name was Adolph, and he earned his nickname because he played the harp. Famously he didn’t speak on screen, a routine he developed after reading a review that he performed really well when he just didn’t speak!

Carrot Top is the stage name of stand-up comedian Scott Thompson. He is well-known for his bright red hair, which gives him the moniker.

32. Soap, e.g. SERIAL
The original soap operas were radio dramas back in the fifties. Given the structure of society back then, the daytime broadcasts were aimed at housewives working in the home. For some reason the sponsors of those radio shows, and the television shows that followed, were soap manufacturers like Procter & Gamble, Colgate-Palmolive and Lever Brothers. And that’s how the “soap” opera got its name …

35. River through Yakutsk LENA
Yakutsk is the capital city of the Sakha Republic in Russia. Yakutsk sits on the Lena River, just south of the Arctic Circle.

36. Eye-catching link designed to generate ad revenue CLICK BAIT
“Click bait” is trickery used by website designers to entice a reader to click on a particular link. That link may be a disguised ad, so that the website owner gets some income from the advertiser.

39. Sith foe JEDI
The Sith are characters in the “Star Wars” universe who use the “dark side” of “the Force”, and as such are the antithesis of the Jedi Knights. The last made of the six original “Star Wars” movies is called “Star Wars Episode III: Revenge of the Sith”.

42. Thanksgiving follower: Abbr. FRI
Thanksgiving Day was observed on different dates in different states for many years, until Abraham Lincoln fixed the date for the whole country in 1863. Lincoln’s presidential proclamation set that date as the last Thursday in November. In 1941, President Franklin D. Roosevelt moved the holiday to the fourth Thursday in November, arguing that the earlier date would give the economy a much-needed boost.

50. The same, in Sauternes EGALE
“Égal” (feminine “égale”) is the French word for “equal, alike”, and a word we sometimes use in English with the same meaning. The national motto of France is “Liberté, égalité, fraternité”, meaning “Liberty, equality, fraternity (brotherhood).

51. “In the Summertime” rock group __ Jerry MUNGO
Mungo Jerry is a great rock group from England. The band’s biggest hit is “In the Summertime”, which was released in 1970. The group’s name comes from the T.S. Eliot poem “Mungojerrie and Rumpelteazer” from his collection “Old Possum’s Book of Practical Cats”.

54. Company name based on a passage from Hosea EL AL
El Al Israel Airlines is the flag carrier of Israel. The term “el al” translates from Hebrew as “to the skies”. The phrase comes from Hosea 11:7, which reads:
And my people are in suspense about returning to me; and though they call them upwards (el-al), none at all will lift himself up.

57. 21st Greek letter PHI
Phi is the 21st letter of the Greek alphabet.

60. God in both Eddas ODIN
The Poetic Edda and Prose Edda are two ancient works that are the source for much of Norse mythology. Both Eddas were written in the 13th century, in Iceland.

64. __-Tremblant, Quebec MONT
Mont-Tremblant is city in Quebec located about 80 miles northwest of Montreal. The city is noted for the nearby Mont-Tremblant ski resort. Both are named for the mountain called Mont Tremblant, which is French for “trembling mountain”, the name used by the local Algonquin people.

67. Deli counter customers, as a rule MEAT-EATERS
The word “delicatessen” (or “deli” for short) came into English from the German “Delikatessen”. The Germans borrowed the word from French, in which language “délicatesse” means “delicious things (to eat)”. The term’s ultimate root is “delicatus”, the Latin for “giving pleasure, delightful”.

Down
1. Moving aids CASTERS
Small wheels on swivels that are attached to the bottom of furniture and machines, to facilitate moving, are called “casters”. The name comes from the old sense of the verb “to cast” when it meant “to turn”.

3. Subject of a 1983 incident in which a George Brett homer was originally nullified PINE TAR
Pine tar is applied to the handles of baseball bats as it is a sticky substance and improves the batter’s grip. In a 1983 game, the Yankees manager Billy Martin protested a home run hit by George Brett of the Royals because the pine tar on his bat extended beyond the regulation 18 inches. The home run was later allowed as it was determined that the 18-inch rule was in place for economic reasons, and had nothing to do with competitive advantage. If pine tar gets on a baseball it renders it unusable for play, and baseballs cost money!

7. Throw in a pen WARM UP
A baseball pitcher warms up by throwing balls in a bull pen.

10. Mother of the Valkyries ERDA
In Richard Wagner’s (very, very lengthy) Ring Cycle, Erda is the goddess of the Earth (as well as wisdom and fate). Erda gives birth to eight immortal daughters called the Valkyries.

12. Sushi bar appetizer EDAMAME
Edamame is a simple dish made of immature soybeans still in the pod. The pods are boiled and then salted before serving, usually as a snack or side dish. The name “edamame” translates as “twig bean”.

13. Albino’s lack MELANIN
An “albino” is an organism lacking normal pigmentation. The term comes from “albus”, Latin for “white”.

14. Horace’s “Ars __” POETICA
The full name of Horace’s work is “Ars Poetica, Epistula ad Pisones” (The Art of Poetry, Letters to Piso). The work describes the technical aspects of poetry in Ancient Rome, and the term “ars poetica” has come to mean the poetry of that period.

29. __ du pays: homesickness MAL
Here are some French terms for some unpleasant conditions:

40. Gran Colombia successor state ECUADOR
The old South American colony known as the Viceroyalty of New Granada (Virreinato de la Nueva Granada) covered the territories that today are (roughly) covered by Colombia, Ecuador and Venezuela. New Granada won independence from Spain in 1819-22, forming a Republic then known as Gran Colombia. Then, Ecuador and Venezuela seceded from Gran Colombia leaving what today is called Colombia, but was for many years called the Republic of New Granada.

41. Like the queen in a 1977 #1 hit DANCING
“Dancing Queen” is a great, great song from 1976 that was released by the Swedish group ABBA. ABBA’s music has never been as popular in the US as it is in other countries, but “Dancing Queen” did make it to the number-one spot in the charts here. It was in fact, ABBA’s only #1 hit in the US.

44. __ Islands: former name of an Indian Ocean republic MALDIVE
The Maldives is an island nation consisting of two chains of atolls in the Indian Ocean. The population of over 300,000 people is distributed over 192 of inhabited islands, with about 1,000 island remaining uninhabited. The Maldives is one of the countries in the world that is most endangered by rising sea levels.

46. Bears, often SELLERS
The terms “bull” and “bear” markets come from the way in which each animal attacks. A bull thrusts his horns upwards (an “up” market), whereas a bear swipes with his paws downward (a “down” market).

58. Pachacuti, for one INCA
Pachacuti was a ruler of the Inca kingdom of Cusco. The famous Inca site known as Machu Picchu is thought to have been an estate built for Pachacuti. When Pachacuti took over as ruler of Cusco, it was a relatively small chiefdom. By the time that he died in 1472, he was ruling a vast Inca Empire.

63. Small muscle? LAT
The muscles known as the “lats” are the latissimi dorsi, the broadest muscles in the back. “Latissimus” is the Latin for “broadest” and “dorsum” is Latin for “back”.