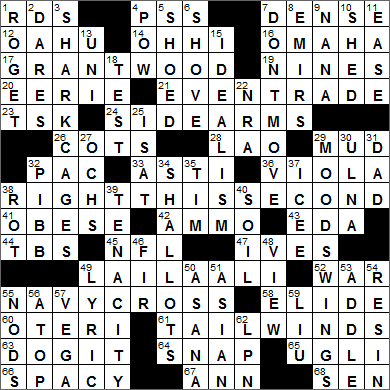 CROSSWORD SETTER: George Simpson & C.C. Burnikel
THEME: Tailwinds … each of today’s themed answers ends with a type of WIND, has a WIND in its TAIL:

4. Ltr. addenda PSS
One adds a PS (post scriptum, or simply “postscript”) at the end of a letter (ltr.). A second postscript is a post post scriptum, a PPS.

12. Obama’s birthplace OAHU
Despite rumors to the contrary, I am pretty sure that Barack Hussein Obama II was indeed born in Hawaii. President Obama was born on August 4, 1961 at Kapi’olani Maternity & Gynecological Hospital in Honolulu, Hawaii.

16. Nebraska city OMAHA
Omaha is the largest city in the state of Nebraska. It is located on the Missouri River, about 10 miles north of the mouth of the Platte River When Nebraska was still a territory Omaha was its capital, but when Nebraska achieved statehood the capital was moved to the city of Lincoln.

20. Causing goose bumps EERIE
The goose bumps that occur on a person’s skin are the result of exposure to cold or experience of strong emotion. The bumps are the result of tiny muscles attached to hair follicles contracting, causing the hair to stand on end and creating a “bump” in the skin around the hair.

21. Equitable transaction EVEN TRADE (giving “trade wind”)
The trade winds are the winds found in the tropics that blow predominantly from the east (from the northeast above the equator, and from the southeast below). Although the trade winds were crucial during the age of sail, allowing the European empires to grow and prosper, the use of the term “trade” had nothing to do with commerce. Rather, the name “trade” was a Middle English word that meant “path, track”, a reference to the predictable courses used by the sailing vessels. It was from these favorable “trade” winds that we began to associate commerce with the term “trade”.

28. Poet __-tzu LAO
Lao Tse (also Lao-Tzu) was a central figure in the development of the religion/philosophy of Taoism.

33. Italian sparkling wine ASTI
Asti is in the Piedmont region of northwest Italy. The region is perhaps most famous for its Asti Spumante sparkling white wine.

36. One of two in a typical string octet VIOLA
A “string octet” is a piece of music written for a group of eight players of string instruments, or the name for that group. A string octet is usually made up of four violins, two violas and two cellos. Sometimes one of the cellos is replaced with a double bass.

42. Round in a pistol AMMO
The word “munitions” describes materials and equipment used in war. The term derives from the Latin “munitionem” meaning “fortification, defensive wall”. Back in the 17th century, French soldiers referred to such materials as “la munition”, a Middle French term. This was misheard as “l’ammunition”, and as a result, we ended up importing the word “ammunition” into English, a term that we now use mainly to describe the material fired from a weapon.

43. Writer LeShan EDA
Eda LeShan wrote “When Your Child Drives You Crazy”, and was host of the PBS television show “How Do Your Children Grow?”

44. Conan O’Brien’s network TBS
Before Conan O’Brien came to fame as a late night talk show host he was a writer. He wrote for both “Saturday Night Live” and “The Simpsons”.

45. Org. with Raiders and Vikings NFL
The Oakland Raiders football team was founded in 1960, and was originally intended to play in Minnesota. Instead, the team played in Oakland from 1960 to 1981 and then spent 12 years in Los Angeles before returning to Oakland in 1995.

The Minnesota Vikings joined the NFL as an expansion team in 1960. Founded in Minnesota, the team’s name reflects the location’s reputation as a center of Scandinavian American culture.

47. Folk singer Burl IVES
As well as being an actor, Burl Ives was a folk singer, his original calling. In Hollywood Ives had a distressing experience with the House Un-American Activities Committee and avoided being blacklisted by cooperating at some level with McCarthy and his cohorts. This cooperation created a rift between him and Pete Seeger in particular, a fellow singer whom he “discussed” with the committee.

49. Retired boxer with a perfect 24-0-0 record LAILA ALI
Laila Ali is the daughter of the great Muhammad Ali and is a very capable boxer in her own right. Laila’s professional record is an impressive 24 wins, including 21 knockouts. She never lost a fight, and nor did she ever draw. One of those victories was against Jackie Frazier-Lyde, daughter of her father’s nemesis Joe Frazier. Laila is not a bad dancer either, coming in third place in the fourth season of “Dancing with the Stars”.

55. Award for seagoing heroes NAVY CROSS (giving “cross wind”)
The highest military decoration awarded for gallantry is the Medal of Honor. The second highest medal is specific to the service, namely the Distinguished Service Cross (Army), the Navy Cross (Navy, Marine Corps and Coast Guard) and the Air Force Cross. The third highest award is the Silver Star.

60. Cheri of “SNL” OTERI
Cheri Oteri was the SNL cast member who regularly appeared with Will Farrell in the skit featuring a pair of Spartan cheerleaders.

63. Shirk work DOG IT
“To dog it” is a slang term (unknown to me outside of crosswords) meaning to not expend the effort necessary to accomplish a task.

65. Wrinkled tangelo UGLI
A fruit called a tangelo is a hybrid between a tangerine and either a grapefruit or a pomelo (which gives its the name). A pomelo is a very large, pear-shaped citrus fruit native to Southeast Asia. The Jamaican form of tangelo is known as the ugli fruit.

68. One of a D.C. 100 SEN
The six-year terms enjoyed by US senators are staggered, so that every two years about one third of the 100 US Senate seats come up for reelection.

Down
1. Man of many words ROGET
Peter Mark Roget was an English lexicographer. Roget was an avid maker of lists, apparently using the routine of list-making to combat depression, a condition he endured for most of his life. He published his famous thesaurus in 1852, with revisions and expansions being made years later by his son, and then in turn by his grandson.

8. Mideast dignitaries EMIRS
In English, emir can also be written as emeer, amir and ameer (watch out for those spellings in crosswords!).

18. Word after screen or scratch TEST
A scratch test is a skin allergy test. A medical professional introduces a microscopic amount of a selection of allergens into the surface of the skin to provoke a reaction. Such a reaction indicates sensitivity to that particular allergen.

22. Agency under FDR NRA
The National Recovery Administration (NRA) was one of the first agencies set up under President Roosevelt’s New Deal program. On the one hand the NRA help set minimum wages and maximum working hours for workers in industry, and on the other hand it helped set minimum prices for goods produced by companies. The NRA was very popular with the public, and businesses that didn’t opt to participate in the program found themselves boycotted. The NRA didn’t survive for long though, as after two years of operation it was deemed to be unconstitutional by the US Supreme Court and so it ceased operations in 1935.

25. “The wolf __ the door” IS AT
Originally “the wolves are at the door”, our phrase “the wolf is at the door” used to mean that a person was destitute and just waiting for death to take them. The meaning has softened over time and now usually indicates a level of financial difficulty.

27. Folk legend Phil OCHS
Phil Ochs was an American protest singer who was active in the days of the Vietnam War. Sadly, the singer’s mental health declined at the very time the war was winding down. Saigon fell in 1975, and Ochs committed suicide in 1976.

30. Wrist-to-elbow bone ULNA
The humerus is the long bone in the upper arm. The bones in the forearm are the radius and ulna. “Ulna” is the Latin word for “elbow”, and “radius” is Latin for “ray”.

32. Mr. __: Dr Pepper rival PIBB
The soft drink on the market today called Pibb Xtra used to be known as Mr Pibb, and before that was called Peppo. Peppo was introduced in 1972 as a direct competitor to Dr Pepper.

Dr Pepper was introduced in 1885 in Waco, Texas, one year before the competing Coca-Cola was released to the market.

35. Tiny Dickens boy TIM
Tiny Tim is the nickname of Timothy Cratchit, the little disabled boy in the Charles Dickens novella “A Christmas Carol”. “A Christmas Carol” is such a popular book that it has not been out of print since its first publication in December 1843.

38. Poppycock ROT
It is thought that the relatively gentle term “poppycock”, meaning “nonsense”, comes from a Dutch word for “dung” combined with a Latin word for “excrete”. Not so gentle after all …

46. Christmas tree choice FIR
The custom of decorating trees at Christmas seems to have originated in Renaissance Germany. Those first trees were placed in guildhalls and were decorated with sweets and candy for the apprentices and children. After the Protestant Reformation, the Christmas tree became an alternative in Protestant homes for the Roman Catholic Christmas cribs. The Christmas tree tradition was imported into Britain by the royal family because of its German heritage. That tradition spread from Britain into North America.

50. Yoga pose ASANA
“Asana” is a Sanskrit word literally meaning “sitting down”. The asanas are the poses that a practitioner of yoga assumes. The most famous is the lotus position, the cross-legged pose called “padmasana”.

57. 1970s Chevy subcompact VEGA
The Chevrolet Vega is a small car that was produced by GM in the seventies. The Vega was much lauded at its launch but was plagued by problems with its engineering, reliability and safety.

59. Sch. with a Brooklyn campus LIU
Long Island University (LIU) is a private school that was chartered in 1926. LIU’s focus has always been on providing moderately-priced, effective education to people from all walks in life. To that end, LIU opened a second campus in 1951 in Brookville in the suburbs of New York City, recognizing the need to serve families that were living outside of the metropolis.