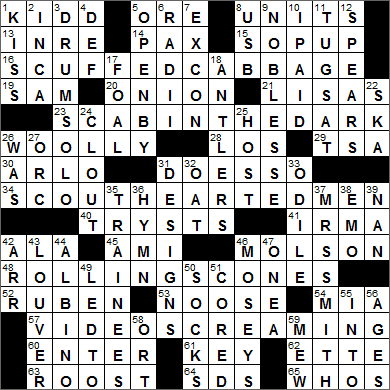 CROSSWORD SETTER: Jeffrey Wechsler
THEME: ST to SC … each of today’s themed answers is a common phrase in which the letters ST have been replaced with SC:

16A. Imperfect produce? SCUFFED CABBAGE (from “stuffed cabbage”)
23A. Nocturnal picket-line crosser? SCAB IN THE DARK (from “stab in the dark”)
34A. Reconnaissance team? SCOUT-HEARTED MEN (from “stout-hearted men”)
48A. Result of a London tea cart mishap? ROLLING SCONES (from “rolling stones”)
57A. Feature of a taped hardcore punk performance? VIDEO SCREAMING (from “video streaming”)

Today’s Wiki-est, Amazonian Googlies
Across
1. 17th-century privateer KIDD
William Kidd was a Scottish privateer who went by the name “Captain Kidd”. Although Kidd was a privateer, someone authorized by the government to attack foreign shipping, he was eventually arrested and executed for piracy. There is common opinion held today that the charges against Kidd were actually trumped up. Captain Kidd’s story was the basis of a 1945 film called “Captain Kidd” starring Charles Laughton in the title role. Laughton also appeared as Captain Kidd in 1952’s comic movie “Abbott and Costello Meet Captain Kidd”.

A privateer is a person or ship that is authorized by a government to attack enemy ships during time of war. A privateer might be regarded as a pirate with some government backing, although many privateers had a very respectable reputation. One famous privateer of that ilk was Sir Francis Drake who was knighted by Queen Elizabeth I.

14. Downtime for Mars? PAX
As Mars was the Roman god of war, “pax” (Latin for “peace”) would be a period of downtime for him.

19. Rob’s “West Wing” role SAM
The actor Rob Lowe is one of the “founding members” of the so-called Brat Pack, having appeared in the movie “St. Elmo’s Fire”. More recently, Lowe played a regular character on the TV show “Parks and Recreation”. My favorite of his roles though, was playing Sam Seaborn on Aaron Sorkin’s great drama series “The West Wing”. When “The West Wing” first aired, Seaborn was billed as the show’s main character, but outstanding performances from the rest of the cast and some great writing meant that Lowe’s role became “one of many”. This led to some dissatisfaction on Lowe’s part, and eventually he quit the show.

23. Nocturnal picket-line crosser? SCAB IN THE DARK (from “stab in the dark”)
We first started calling strikebreakers “scabs” in the early 1800s, and before that a scab was a person who refused to join a trade union (back as early 1777). The word probably comes from the use of “scab” as a symptom of a skin disease, and so is a term that is meant to insult.

26. Wild partner WOOLLY
Something described as “wild and woolly” lacks culture and is perhaps lawless. The phrase is American in origin and is a reference to the Wild West of the second half of the 19th century.

28. __ Alamos LOS
The town of Los Alamos, New Mexico takes its name from the Spanish for “the poplars” or “the cottonwoods”. Famously, it is home to Los Alamos National Laboratory which was founded during WWII to work on the Manhattan Project, the development of the first atomic bomb. The town of Los Alamos didn’t exist as such, until it was planned and constructed to support the employees working on development of the bomb.

29. Screening gp. TSA
The Transportation Security Administration (TSA) was created in 2001, soon after the 9/11 attacks. TSA personnel carry out the baggage and body searches at US airports.

40. Romance novel features TRYSTS
In its most general sense, a tryst is a meeting at an agreed time and place. More usually we consider a tryst to be a prearranged meeting between lovers. The term comes from the Old French “triste”, a waiting place designated when hunting.

46. It merged with Coors in 2005 MOLSON
The Molson Brewery in Montreal is the oldest brewery in North America. In fact, Molson (now owned by Coors) is the second oldest company in Canada, after the Hudson’s Bay Company.

52. __ Blades, Latin jazz star RUBEN
Rubén Blades is a salsa singer from Panama. He is very accomplished, with a Masters Degree in International Law from Harvard. Blades garnered 18% of the vote when he ran for the Panamanian presidency in 1994, and in 2004 was appointed as the country’s Minister of Tourism.

53. Oater omen NOOSE
The term “oater” that is used for a western movie comes from the number of horses seen, as horses love oats!

54. Uma’s “Pulp Fiction” role MIA
Robert Thurman was the first westerner to be ordained a Tibetan Buddhist monk. Robert raised his children in the Tibetan Buddhist tradition and called his daughter “Uma” as it is a phonetic spelling of the Buddhist name “Dbuma”. Uma’s big break in movies came with her starring role as mobster wife Mia Wallace in Quentin Tarantino’s 1994 hit “Pulp Fiction”. My favorite Uma Thurman film is the wonderful 1996 romantic comedy “The Truth About Cats and Dogs”.

62. Relative of -ule -ETTE
The suffixes “-ule” and “-ette” are used in diminutive nouns, with the former occurring in loanwords from Latin, and the latter in loanwords from French. Examples are capsule, globule and nodule, as well as brunette, cigarette and coquette.

64. ’60s campus org. SDS
Students for a Democratic Society (SDS) was an activist group in the sixties. The SDS organized the largest student strike in the history of the United States on 26 April 1968, with about a million students staying away from class that day. The “Students for a Democratic Society” name was revived in 2006 with the foundation of a new US-based student organization with left wing beliefs. Today’s SDS was founded by a pair of high school students from Greenwich Village, New York.

Down
1. Petruchio’s request of Kate KISS
William Shakespeare’s “The Taming of the Shrew” is about a courting couple. The male is Petruchio, a gentleman of Verona, and the female is Katharina, the so-called “shrew”. As the play progresses, the “shrew” is “tamed” and becomes an “obedient” bride … a controversial storyline in the contemporary world, to say the least. Regardless, modern adaptations have been made, including 1948’s Broadway musical “Kiss Me Kate” and the 1999 romantic comedy “10 Things I Hate About You”.

2. Empire whose last stronghold was conquered in 1572 INCA
The Inca people emerged as a tribe around the 12th century, in what today is southern Peru. The Incas developed a vast empire over the next 300 years, extending along most of the western side of South America. The Empire fell to the Spanish, finally dissolving in 1572 with the execution of Tupac Amaru, the last Incan Emperor.

3. Ginger Baker specialty DRUM SOLO
Ginger Baker is a drummer from London who famously founded the rock trio Cream in 1966, along with Eric Clapton and Jack Bruce. Baker lived for a few years in Africa in the seventies, largely driven by his interest in African music.

6. Pizza cuts, essentially RADII
“Radius” (plural “radii”) is a Latin word, as one might expect, meaning “spoke of a wheel”. Makes sense, huh …?

8. Flash drive letters USB
Universal Serial Bus (USB) is an industry standard dealing with how computers and electronic devices connect and communicate, and deal with electrical power through those connections.

17. Future yearling FOAL
There are lots of terms to describe horses of different ages and sexes, it seems:

22. Jamaican genre SKA
Ska originated in Jamaica in the late fifties and was the precursor to reggae music. No one has a really definitive etymology of the term “ska”, but it is likely to be imitative of some sound.

27. Tolkien terror ORC
Orcs are mythical humanoid creatures that appear in the writings of J. R. R. Tolkien. Since Tolkien’s use of orcs, they have also been featured in other fantasy fiction and in fantasy games.

31. Chanel creations DESIGNS
Coco Chanel was a French fashion designer. Perhaps because I am a man, clothes design is not my forte. However, if I had to pick a designer whose clothes I really liked, it would be Chanel. She had a way of creating simpler designs that looked so elegant on a woman.

33. Ballet’s Black Swan ODILE
“Swan Lake” is such a delightfully light and enjoyable ballet by Pyotr Ilyich Tchaikovsky. “Swan Lake” tells the story of Odette, a princess turned into a swan by a sorcerer. The ballet also features Odile, Odette’s “evil twin”. Odile is disguised to look like Odette with the goal of tricking the prince to fall in love with her. In the ballet, the roles of Odette and Odile are played by the same ballerina.

36. “Amazing Grace,” e.g. HYMN
“Amazing Grace” is a very, very famous hymn, with words written by John Newton in 1779. The words have been set to a number of different melodies, and what we are used to hearing is music of a tune named “New Britain”.

37. Big name in pies MRS SMITH
The company known as Mrs. Smith’s Pies was founded by Amanda Smith and her son in the 1920s. The Smiths started the company to take advantage of increasing demand for her own fruit pies that she sold at a local YMCA lunch counter in Pottstown, Pennsylvania.

38. Comic Philips EMO
Emo Philips is a stand-up comedian from Chicago. He’s had a long and successful career, and listed on his resume is a small acting part in the 1992 hit movie “Meet the Parents” starring Robert De Niro and Ben Stiller. Philips was also the executive producer for that very same film, so, I’d say he made a few pennies …

Los Angeles International Airport is the sixth busiest airport in the world in terms of passenger traffic, and the busiest here on the West Coast of the US. The airport was opened in 1930 as Mines Field and was renamed to Los Angeles Airport in 1941. On the airport property is the iconic white structure that resembles a flying saucer. This is called the Theme Building and I believe it is mainly used as a restaurant and observation deck for the public. The airport used to be identified by the letters “LA”, but when the aviation industry went to a three-letter standard for airport identification, this was changed to “LAX”. Apparently the “X” has no significant meaning.

44. Spooner of Spoonerism fame, for one ALBINO
An “albino” is an organism lacking normal pigmentation. The term comes from “albus”, Latin for “white”.

47. Most fit to serve ONE-A
The US government maintains information on all males who are potentially subject to military conscription, using what is called the Selective Service System(SS). In the event that a draft was held, men registered would be classified into groups to determine eligibility for service. Class 1-A registrants are those available for unrestricted military service. Other classes are 1-A-O (conscientious objector available for noncombatant service), 4-A (registrant who has completed military service) and 4-D (Minister of religion).

59. Copy cats MEW
If we wanted to copy a cat, we might start mewing.