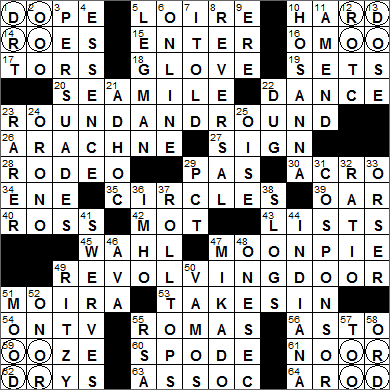 CROSSWORD SETTER: David Poole
THEME: Revolving Door … we have four circled letters in each of the four corners of the grid. The circled letters spell the word DOOR, and the position of the letters REVOLVES as we go round the grid:

49A. Hotel entrance, often, and, literally, what each set of four puzzle 35-Across contains REVOLVING DOOR
23A. How a 49-Across goes ROUND AND ROUND
35A. Paths described when things go 23-Across CIRCLES

Today’s Wiki-est, Amazonian Googlies
Across
1. Rope-a-__: Ali boxing style DOPE
The Rumble in the Jungle was that celebrated fight between Muhammad Ali and George Foreman, broadcast from Zaire (now the Democratic Republic of the Congo). The fight was set in Zaire because of financial arrangements between promoter Don King and Zaire’s President Mobutu Seko. “Rope-a-dope” was the term coined by Ali to describe his incredibly successful strategy in the contest. From the second round onwards, Ali adopted a protected stance on the ropes, letting Foreman pound him with blows to the body and head, using his arms to take most of the punches. He kept this up until the eighth round, then opened up, and downed the exhausted Foreman with a left-right combination. I hate boxing, but have to say, that was an interesting fight.

5. French wine valley LOIRE
The Loire is the longest river in France. It is so long that it drains one-fifth of the nation’s land mass. The Loire rises in the southeast, in the Cevennes mountain range, then heads north and then due west, emptying into the Bay of Biscay at the city of Nantes. The Loire Valley is home to some of France’s most famous wine production, and includes the wine regions of Sancerre, Pouilly-Fumé and Muscadet.

14. Agile deer ROES
Roe deer are found mainly in Europe. They would be the deer shown on television and in movies when Robin Hood was out hunting in Sherwood Forest.

16. “Typee” sequel OMOO
Herman Melville mined his own experiences when writing his novels. Melville sailed from New Bedford, Massachusetts in 1841 on a whaler heading into the Pacific Ocean (a source for “Moby Dick”). Melville ended up deserting his ship 18 months later and lived with natives on a South Pacific Island for three weeks (a source for “Typee”). He picked up another whaler and headed for Hawaii, where he joined the crew of a US navy frigate that was bound for Boston (a source for “Omoo”).

22. Twyla Tharp forte DANCE
I love Twyla Tharp’s choreography, and her patented “moves”. Tharp was born in Portland, Indiana in 1941. She was named after Twila Thornburg, the “Pig Princess” of the 89th Annual Muncie Fair in Indiana. That’s one to tell to the grandkids …

26. Weaver turned into a spider by Athena ARACHNE
In Greek and Roman mythology, Arachne was a mortal woman who was a great weaver. Arachne boasted that her weaving was greater than that of the goddess Athena (or Minerva in Roman myth), and this was proven true in a contest. As a result, Arachne was turned into a spider by Athena. “Arachne” is the Greek word for spider.

27. Zodiac division SIGN
Many of the signs of the classical Greek zodiac are animals. This fact relates to the etymology of the term “zodiac”, which comes from the Greek “zodiakos kyklos”, literally “circle of animals”.

28. Roping and riding contest RODEO
“Rodeo” is a Spanish word, which is usually translated as “round up”.

30. Height: Pref. ACRO-
Our prefix “acro-” comes from the Greek “akros” meaning “at the top”. Examples are “acrophobia” (fear of heights) and “Acropolis” (“city at the top”).

40. Flag maker Betsy ROSS
Legend has it that Betsy Ross made the first American flag for General George Washington. However, this story only surfaced during the centennial celebrations of 1876, and although Betsy Ross was indeed one of several flag makers in Philadelphia in the days of George Washington, sadly there’s no definitive evidence that Ross provided that first Stars and Stripes.

43. Much of Santa’s mail LISTS
If you want to send a note to Santa in Canada, he has his own special postal code: “North Pole, HOH OHO”. The US Postal Service suggests that we send mail for Santa to zip code 99705, which directs it to the city of North Pole, Alaska.

45. Big name in hair trimmers WAHL
The Wahl Clipper Corporations is a company based in Sterling, Illinois that makes grooming clippers for both humans and animals.

47. Marshmallowy treat MOON PIE
Marshmallow cream was developed in 1927. Soon after, workers in the coal mines around Chattanooga, Tennessee started dipping graham crackers in marshmallow cream as a snack. Then a local baker jumped on the idea, and came up with a sandwich made with a marshmallow filling between two round graham crackers. His young grandson remarked that the popped bubbles in the marshmallow (from baking) looked like moon craters, and the Moon Pie was born. I used to love them as a kid, although we called them “Wagon Wheels” in our part of the world.

51. Actress Kelly of “The Cutting Edge” MOIRA
Moira Kelly is an actress from Queens, New York. Kelly provided the voice for the female lion cub Nala in “The Lion King” and its sequel. I mostly remember her for playing a White House media consultant in the first series of the wonderful TV drama “The West Wing”.

“The Cutting Edge” is a 1992 romantic comedy film about a couple of ice skaters who are paired for an Olympic figure skating event. One is a rich, spoiled figure skater, and the other is an injured hockey player. “The Cutting Edge” was directed by Paul Michael Glaser, who played Detective David Starsky in the seventies cop show “Starsky and Hutch”.

55. Some plum tomatoes ROMAS
The Roma tomato isn’t considered to be an heirloom variety, but it is very popular with home gardeners, especially those gardeners that don’t have a lot of space. It is a bush type (as opposed to vine type) and needs very little room to provide a lot of tomatoes.

60. China company based in Stoke-on-Trent SPODE
Spode is a brand of pottery made in Stoke-on-Trent in the north of England. The company was founded by Josiah Spode in 1770. Spode is noted for its fine bone china, and indeed Josiah Spode came up with the first successful formulation for bone china. Bone china is so called because one of the main components is bone ash derived from animal bones.

61. Jordan’s Queen __ NOOR
Queen Noor is the widow of King Hussein of Jordan. Queen Noor was born Lisa Halaby in Washington, D.C., the daughter of Najeeb Halaby. Her father was appointed by President Kennedy as the head of the Federal Aviation Administration, and later became the CEO of Pan Am. Lisa Halaby met King Hussein in 1977, while working on the design of Jordan’s Queen Alia Airport. The airport was named after King Hussein’s third wife who had been killed that year in a helicopter crash. Halaby and the King were married the next year, in 1978.

62. Prohibitionists DRYS
There were concerted efforts to ban the sale of alcoholic beverages in the US from the 1840s right up until the lobbyists achieved success with ratification of the Eighteenth Amendment to the US Constitution in 1919. While there were several factors that influenced legislators at that time, one was the perceived need to take political power away from German-based brewing industry during WWI.

63. The “A” in YMCA: Abbr. ASSOC
The YMCA is a worldwide movement that has its roots in London, England. There, in 1844, the Young Men’s Christian Association (YMCA) was founded with the intent of promoting Christian principles through the development of “a healthy spirit, mind and body”. The founder, George Williams, saw the need to create YMCA facilities for young men who were flocking to the cities as the Industrial Revolution flourished. He saw that these men were frequenting taverns and brothels, and wanted to offer a more wholesome alternative.

64. Yankee who passed Willie Mays on the career HR list on 5/7/2015 A-ROD
Professional baseball player Alex Rodriguez earned more nicknames than just A-Rod. He has been called “the Cooler” by some players as there is a perception that teams go cold when he joins them and hot when he leaves. He has also been called “A-Fraud” by teammates because of another perception, that he is over-demanding. Rodriguez now seems to be in a world of hurt for using illegal performance-enhancing drugs. As a result, another moniker that has been applied to him is “A-Roid”.

10. Hallelujah kin HOSANNA
“Hosanna” is derived from Hebrew, probably from the term “hoshi’ah-nna” meaning “save, we pray”.

12. Campus recruiting org. ROTC
The Reserve Officers’ Training Corps (ROTC) is a training program for officers based in colleges all around the US. The ROTC program was established in 1862 when as a condition of receiving a land-grant to create colleges, the federal government required that military tactics be part of a new school’s curriculum.

21. Like a specially formed committee AD HOC
The Latin phrase “ad hoc” means “for this purpose”.

25. Seine tributary OISE
The River Oise rises in Belgium and joins up with the River Seine just outside Paris.

33. Skater Brian ORSER
Brian Orser is a retired Canadian figure skater. Orser was one of the “combatants” in the Battle of the Brians, the name given to the rivalry between Brian Orser and US skater Brian Boitano.

46. Actress Gardner AVA
Ava Gardner is noted for her association with some big movies, but also for her association with some big names when it came to the men in her life. In the world of film, she appeared in the likes of “Mogambo” (1953), “On the Beach” (1959), “The Night of the Iguana” (1964) and “Earthquake” (1974). The men in her life included husbands Mickey Rooney, Artie Shaw and Frank Sinatra. After her marriages had failed (and perhaps before!) she had long term relationships with Howard Hughes and bullfighter Luis Miguel Dominguin whom she met through her friend Ernest Hemingway.

47. Operetta set in Japan, with “The” MIKADO
“The Mikado” is a wonderful comic opera by Gilbert and Sullivan, set in the exotic location of Japan. “Mikado” is a former term for the “Emperor of Japan”. In the opera, Nanki-Poo is the Mikado’s son, who falls in love with Yum-Yum.