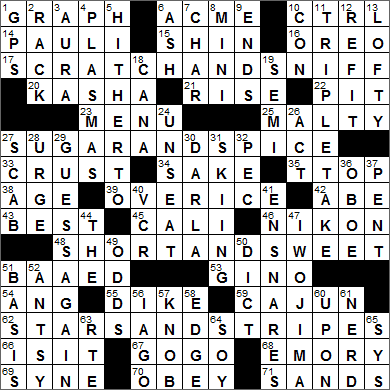 CROSSWORD SETTER: Mark Bickham
THEME: S and S … each of today’s themed answer is a three-word phrase with AND sitting between two words starting with the letter S:

71A. Metaphor for time … and, when divided into three words, puzzle theme found in the four longest across answers SANDS (or “S AND S”)

17A. Like stickers that smell when rubbed SCRATCH AND SNIFF
27A. Little girl’s makeup, so they say SUGAR AND SPICE
48A. Terse SHORT AND SWEET
62A. Old Glory STARS AND STRIPES

Today’s Wiki-est, Amazonian Googlies
Across
6. Very top ACME
The “acme” is the highest point, coming from the Greek word “akme” which has the same meaning.

14. St. __ Girl beer PAULI
St. Pauli Girl beer is brewed in Bremen in Germany. The beer gets its name from the former St. Paul’s Monastery in Bremen, next door to which was located the original brewery.

16. Nabisco cookie OREO
The Oreo was the best-selling cookie in the 20th century, and almost 500 billion of them have been sold since they were introduced in 1912 by Nabisco. In those early days the creme filling was made with pork fat, but today vegetable oils are used instead. If you take a bite out of an Oreo sold outside of America you might notice a difference from the homegrown cookie, as coconut oil is added in the overseas version to give a different taste.

20. Buckwheat dish KASHA
“Kasha” is a type of porridge made from roasted whole-grain buckwheat. The dish is most popular in the Russian and Jewish cultures.

Despite the name, “buckwheat” is not related to wheat, and nor is it a grass. Buckwheat is related to rhubarb. As the seeds are eaten, it is known as a “pseudocereal”. The name comes from “beech wheat”, a reference to the resemblance of buckwheat seeds to beech nuts from the “beech” tree, and the fact that buckwheat seeds are used like “wheat”.

27. Little girl’s makeup, so they say SUGAR AND SPICE
The nursery rhyme “What Are Little Boys Made Of?” is falling out of favor these days as it is considered sexist by modern standards:

35. Firebird roof option T-TOP
A T-top is a car roof that has removable panels on either side of a rigid bar that runs down the center of the vehicle above the driver.

42. Bart Simpson’s grandpa ABE
In the animated TV show called “The Simpsons”, Grampa Abe Simpson is voiced by Dan Castellaneta, the same actor who provides the voice for Homer.

45. City near Colombia’s coastline CALI
In terms of population, Cali is the third largest city in Colombia (after Bogotá and Medellin). Santiago de Cali (the full name for the city) lies in western Colombia. Apparently, Cali is a destination for “medical tourists”. The city’s surgeons have a reputation for being expert in cosmetic surgery and so folks head there looking for a “cheap” nose job.

46. Leica competitor NIKON
Nikon was founded in 1917, a merger of three companies making various optical devices. After the merger, the company’s main output was lenses (including the first lenses for Canon cameras, before Canon made its own). During the war, Nikon sales grew rapidly as the company focused on (pun unintended!) equipment for the military including periscopes and bomb sights.

Leica is a German optics company, famous for production of lenses and cameras. The 1913 Leica was the first practical camera that could use 35mm film, a size chosen because it was already the standard for film used in motion pictures.

53. Pop singer Vannelli GINO
Gino Vannelli is a Canadian singer, from Montreal, Quebec. Today. Vannelli is very popular in Holland, and divides his time between his homes in the US and the Netherlands.

54. “Life of Pi” director Lee ANG
Taiwanese director Ang Lee sure has directed a mixed bag of films, mixed in terms of genre but not in terms of quality. He was at the helm for such classics as “Sense & Sensibility” (my personal favorite), “Crouching Tiger, Hidden Dragon”, “Hulk”, “Brokeback Mountain” and “Life of Pi”.

The 2012 movie “Life of Pi” is based on a 2001 novel of the same name by Yann Martel. The “Pi” in the title is an Indian boy named Pi Patel who finds himself adrift for 227 days in small boat with a Bengal tiger named Richard Parker.

55. Flood preventer DIKE
A dike is an embankment usually made of earth and rock that is used to prevent floods.

59. Louisiana cuisine CAJUN
The great explorer Verrazzano gave the name “Arcadia” to the coastal land that stretched from north of present day Virginia right up the North American continent to Nova Scotia. The name Arcadia was chosen as it was also the name for a part of Greece that had been viewed as idyllic from the days of classical antiquity. The “Arcadia” name quickly evolved into the word “Acadia” that was used locally here in North America. Much of Acadia was settled by the French in the 1600s, and then in 1710 Acadia was conquered by the British. There followed the French and Indian War after which there was a mass migration of French Acadians, often via the French colony of Saint-Domingue (present-day Haiti) to the French colony of Louisiana. The local dialectic pronunciation of the word “Acadian” was “Cajun”, giving the name to the ethnic group for which Louisiana has been home for about 300 years.

62. Old Glory STARS AND STRIPES
The person who coined the phrase “Old Glory” with reference to the American flag was Captain William Driver, a shipmaster from Salem, Massachusetts. As Driver was leaving on an 1831 voyage aboard the brig Charles Doggett, he unfurled the American flag that he had just been given by a group of friends. As the flag caught the breeze, he uttered the words, “Old Glory!”. That’s the story anyway. On that same voyage, Charles Doggett rescued the famous mutineers of the HMS Bounty, after he found them on Pitcairn Island.

67. Kind of dancer or boots GO-GO
Go-go dancing started in the early sixties. Apparently, the first go-go dancers were women at the Peppermint Lounge in New York City who would spontaneously jump up onto tables and dance the twist. It wasn’t long before clubs everywhere started hiring women to dance on tables for the entertainment of their patrons. Out in Los Angeles, the “Whisky a Go Go” club on Sunset Strip added a twist (pun intended!), as they had their dancers perform in cages suspended from the ceiling, creating the profession of “cage dancing”. The name “go-go” actually comes from two expressions. The expression in English “go-go-go” describes someone who is high energy, and the French expression “à gogo” describes something in abundance.

The original go-go boot from the sixties comes to the knee and has a low heel. Prior to the sixties, boots really weren’t worn much by women other than as protection against bad weather. Now they are a fashion statement.

68. Atlanta campus EMORY
Emory is a private school in Atlanta, Georgia with a focus on graduate research. The school was named after a Methodist Episcopal bishop called John Emory, who was very popular at the time of the school’s founding in 1836.

69. “Auld Lang __” SYNE
The song “Auld Lang Syne” is a staple at New Year’s Eve (well, actually in the opening minutes of New Year’s Day). The words were written by Scottish poet Robbie Burns. The literal translation of “Auld Lang Syne” is “old long since”, but is better translated as “old times”. The sentiment of the song is “for old time’s sake”.

4. Some flat-screen TVs PLASMAS
Plasma televisions are so called because the screen is made up tiny cells containing electrically charged ionized gases (plasmas). Each of the cells is effectively a tiny fluorescent lamp.

10. Grifter’s specialty CON
A grifter is a confidence trickster, although the term has been used for non-violent criminals in general.

18. “How many times __ man turn his head and pretend that he just doesn’t see?”: Dylan CAN A
Bob Dylan wrote the famous song “Blowin’ in the Wind” in 1963, apparently taking all of ten minutes to finish the whole composition.

30. Alfalfa’s girl DARLA
Alfalfa’s love interest in “Our Gang” was Darla, whose real name was Darla Hood. Hood became quite a successful singer after she grew out of her “Our Gang” role.

32. Push-up target, briefly PEC
“Pecs” is the familiar term for the chest muscle, more correctly known as the pectoralis major muscle. “Pectus” is a the Latin word for “breast, chest”.

47. Historic Japanese island battle site IWO JIMA
Iwo Jima is a volcanic island located south of Tokyo that today is uninhabited. The name is Japanese for “Sulfur Island”, referring to the sulfur mining on which Iwo Jima’s economy once depended. There were about a thousand Japanese civilians living on the island prior to WWII. In 1944, there was a massive influx of Japanese military personnel in anticipation of the inevitable US invasion. As the Japanese military moved in, the civilians were forced out and no one has lived there since.

50. Merriam-Webster ref. DICT
George and Charles Merriam founded their publishing company in 1831, and in 1843 purchased the rights to Noah Webster’s dictionary a few months after his death. Merriam-Webster has been publishing mainly dictionaries and reference books ever since.

56. “Othello” villain IAGO
Iago is the schemer in Shakespeare’s “Othello”. Iago is a soldier who fought alongside Othello and feels hard done by, missing out on promotion. He hatches a plot designed to discredit his rival Cassio by insinuating that Cassio is having an affair with Desdemona, Othello’s wife. By the end of the play it’s Iago himself who is discredited and Othello (before committing suicide) apologizes to Cassio for having believed Iago’s lies. Heavy stuff …

63. AAA suggestion RTE
The American Automobile Association (AAA) is a not-for-profit organization focused on lobbying, provision of automobile servicing, and selling of automobile insurance. The AAA was founded in 1902 in Chicago and published the first of its celebrated hotel guides back in 1917.

64. Dim sum sauce SOY
Soy sauce is made by fermenting soybeans with a mold, in the presence of water and salt. Charming …

65. Part of PBS: Abbr. SYS
The Public Broadcasting Service (PBS) was founded in 1970, and is my favorite of the broadcast networks. I love PBS’s drama and science shows in particular, and always watch the election results coming in with the NewsHour team.