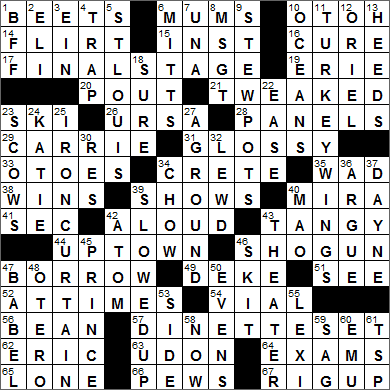 CROSSWORD SETTER: Lila Cherry
THEME: Theater Endings … each of today’s themed answers ends with a part of a THEATER:

43D. Broadway building, and where to find the ends of the answers to starred clues THEATER

Today’s Wiki-est, Amazonian Googlies
Across
1. Borscht veggies BEETS
Borscht is a beetroot soup that originated in Ukraine. Borscht can be served both hot and cold.

The gladiolus is a perennial flower in the iris family, and is sometimes called the Sword Lily.

10. “Looking at it differently,” in texts OTOH
On the other hand (OTOH)

14. Play the coquette FLIRT
A “coquet” is a male flirt, with “coquette” being a female flirt. The word comes from French, and is the diminutive of “coq”, the word for a cock. A cock might well be accused of “strutting his stuff” around the chicken run.

19. Cleveland’s lake ERIE
Cleveland, Ohio was named after the man who led the team that surveyed the area prior to founding of the city. General Moses Cleaveland did his work in 1796 and then left Ohio, never to return again.

26. Constellation bear URSA
The constellation called Ursa Major (Latin for “Larger Bear”) is often just called the Big Dipper because of its resemblance to a ladle or dipper. Ursa Major also resembles a plow, and that’s what we usually call the same constellation back in Ireland, the “plough”.

29. Stephen King’s harassed high schooler CARRIE
“Carrie” is a 1974 novel by Stephen King, the first book that he had published. It tells the story of high school girl Carrie White who is bullied, and uses her telekinetic powers to wreak havoc on her tormentors. Apparently, “Carrie” is one of the most frequently banned titles in American schools.

33. Great Plains natives OTOES
The Otoe (also Oto) Native American tribe originated in the Great Lakes region as part of the Winnebago or Siouan tribes. The group that would become the Otoe broke away from the Winnebago and migrated southwestwards ending up in the Great Plains. In the plains the Otoe adopted a semi-nomadic lifestyle dependent on the horse, with the American bison becoming central to their diet.

34. Largest Greek island CRETE
Crete is the largest of the Greek Islands. Crete figures heavily in Greek mythology. Zeus was born in a cave at Mount Ida, the highest peak on the island. Crete was also home to the Labyrinth where the Minotaur was slain by Theseus. Icarus and Daedalus, after having crafted the Labyrinth, escaped from the island using wings that they crafted.

40. Actress Sorvino MIRA
Mira Sorvino is an American actress, winner of an Oscar for her supporting role in the 1995 Woody Allen movie “Mighty Aphrodite”. Sorvino also played a title role opposite Lisa Kudrow in the very forgettable “Romy and Michele’s High School Reunion”.

43. Piquant TANGY
Something that is “piquant” is pleasantly sharp in taste and zesty. “Piquant” is the French word for “prickly”.

46. Clavell novel of feudal Japan SHOGUN
“Shōgun” is a novel by James Clavell, the second in his famous “Asian Saga” suite of six titles. The six books are:

49. Ice hockey feint DEKE
A deke, also known as a dangle, is a technique used to get past an opponent in ice hockey. “Deke” is a colloquial shortening of the word “decoy”.

56. Fava or soya BEAN
Fava bean is an alternative name for the broad bean.

62. Spy novelist Ambler ERIC
Eric Ambler was a British author of spy novels, an author that I read voraciously for relaxation as I worked my way through college. One of his books was “The Light of Day”, which provided inspiration for the comic movie adaptation called “The Pink Panther”. Ambler also wrote the screenplay for the excellent film “A Night to Remember” which told the story of the fateful maiden voyage of the RMS Titanic.

63. Japanese noodle UDON
Udon noodles are made from wheat-flour and are very popular in Japanese cuisine like tempura.

65. “The __ Ranger” LONE
“The Lone Ranger” was both a radio and television show, dating back to its first radio performance in 1933 on a Detroit station. The line “Hi-yo, Silver! Away!” was a device used in the storyline to signal that a riding sequence was starting, so cue the music!

66. Chapel seating PEWS
Anything described is laic (or “laical, lay”) is related to the laity, those members of the church who are not clergy. The term “laic” ultimately comes from the Greek “laikos” meaning “of the people”.

2. Yalie ELI
Eli is the nickname for a graduate of Yale University, a term used in honor of the Yale benefactor Elihu Yale.

3. A, in Austria EIN
The name “Austria” is a Latin variant of the German name for the country, “Österreich”. “Österreich” itself means “Eastern borderlands”, a reference to the country’s history as a prefecture of neighboring Bavaria to the west.

5. Arch city ST LOUIS
The Gateway Arch in St. Louis is the tallest monument in the United States. It was designed by Eero Saarinen, with the help of structural engineer Hannskarl Bandel. They did their design work back in 1947, but construction wasn’t started until 1963. In 1980, a daredevil took it upon himself to parachute onto the top of the arch intending to further jump from the apex of the arch and parachute to the ground. He hit the arch alright, and slid all the way down one of the arches to his death. No comment …

9. Gumbo cookers STEWPOTS
Gumbo is a type of stew or soup that originated in Louisiana. The primary ingredient can be meat or fish, but to be true gumbo it must include the “holy trinity” of vegetables, namely celery, bell peppers and onion. Okra used to be a requirement but this is no longer the case. Okra gave the dish its name as the vernacular word for the African vegetable is “okingumbo”, from the Bantu language spoken by many of the slaves brought to America.

10. Pacific and Atlantic OCEANS
The Pacific Ocean was given its name by the Portuguese explorer Ferdinand Magellan. When Magellan sailed into the ocean on his 1521 circumnavigation of the globe, he encountered favorable winds and so called it “Mar Pacifico” meaning “peaceful sea”.

12. Bay window ORIEL
An oriel window is a bay window that projects from a wall, but does not reach all the way to the ground.

23. Garbage haulers SCOWS
A scow is a flat-bottomed boat with squared-off ends that’s often used for transportation, usually pushed or pulled by a barge. Often a scow can be seen carrying junk or garbage.

24. News anchor Couric KATIE
Katie Couric left NBC’s “The Today Show” in 2006 and took over as news anchor for “CBS Evening News”. In so doing she became the first solo female anchor of a broadcast network evening news program. Couric also has the honor of being the only person to guest-host on “The Tonight Show with Jay Leno”. In fact she “swapped jobs” on that particular day, and Leno filled in for Couric on “The Today Show”. Since 2012, Couric has a hosted a daytime talk show called “Katie” on ABC.

25. *Cold War barrier IRON CURTAIN
The term “Iron Curtain” was first used in the context of Soviet influence over Eastern Europe in a speech made by Winston Churchill in 1946. He made that address in the US, at Westminster College in Fulton, Missouri.

The phrase “Cold War” was coined by the novelist George Orwell in a 1945 essay about the atomic bomb. Orwell described a world under threat of nuclear war as having a “peace that is no peace”, in a permanent state of “cold war”. The specific use of “cold war” to describe the tension between the Eastern bloc and the Western allies is attributed to a 1947 speech by Bernard Baruch.

30. Legal thing RES
“Res” is the Latin for “thing”. “Res” is used in a lot of phrases in the law, including “res ipsa loquitur”. The literal translation of “res ipsa loquitur” is “the thing speaks for itself”. It refers to situations when there is an injury, and the nature of the injury is such that one can assume that negligence had to have taken place.

34. Vittles CHOW
“Chow” is an American slang term for food that originated in California in the mid-1800s. “Chow” comes from the Chinese pidgin English “chow-chow” meaning “food”.

“Victuals” is a term for food that is fit for consumption. We tend to pronounce “victuals” as “vittles”, and we use the term “vittles” and “victuals” interchangeably.

40. Chinese chairman MAO
Mao Zedong (also “Mao Tse-tung”) was born on December 16, 1893 in the Hunan Province of China. As Mao was the son of a peasant farmer, his prospects for education were limited. Indeed he left school at age 13 to work on the family farm but did eventually get to secondary school in Changsha, the provincial capital. In the years following, Mao continued his education in Beijing and turned down an opportunity to study in France.

47. Biblical tower site BABEL
We use the word “babel” now to describe a scene of confusion, lifting the term from the biblical story of the Tower of Babel. The Tower was built in the city of Babylon, and the construction was cursed with a confusion of languages due to the varied origins of all the builders.

48. Alamogordo’s county OTERO
Alamogordo is a city in New Mexico, famous for its proximity to White Sands National Monument. The city gained a little unwelcome notoriety in 2001 when a local church held a public book-burning, mainly of the Harry Potter series of children’s stories.

55. LPGA golfer Thompson LEXI
Lexi Thompson has been a professional golfer since the age of 15, and won her first LPGA tournament at just 16 years of age, which is a record. Thompson had also qualified for the US Women’s Open when she was the ripe old age of 12 years, making her the youngest golfer to play in that tournament.

60. Down Under bird EMU
The emu has had a tough time in Australia since man settled there. There was even an “Emu War” in Western Australia in 1932 when migrating emus competed with livestock for water and food. Soldiers were sent in and used machine guns in an unsuccessful attempt to drive off the “invading force”. The emus were clever, breaking their usual formations and adopting guerrilla tactics, operating as smaller units. After 50 days of “war”, the military withdrew. Subsequent requests for military help for the farmers were ignored. The emus had emerged victorious …