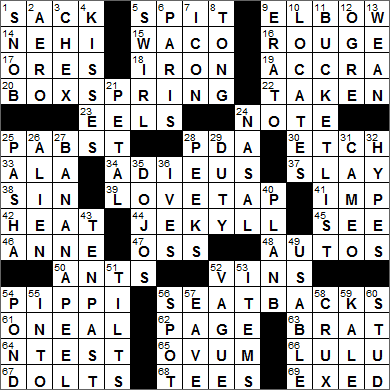 56A. Spots for airline magazines … and, literally, what the first words of the answers to starred clues can all have SEATBACKS

Today’s Wiki-est, Amazonian Googlies
Across
9. Macaroni shape ELBOW
In many cases, the name given to a type of pasta comes from its shape. However, the name macaroni comes from the type of dough used to make the noodle. Here in the US macaroni is usually elbow-shaped tubes, but it doesn’t have to be.

14. Vintage soda NEHI
The brand of Nehi cola has a name that sounds like “knee-high”, a measure of a small stature. Back in the mid-1900’s the Chero-Cola company, which owned the brand, went for a slightly different twist on “knee-high” in advertising. The logo for Nehi was an image of a seated woman’s stockinged legs, with her skirt pulled up to her knees, to hint at “knee-high”.

15. Chisholm Trail city WACO
The Chisholm Trail was used in the late 1800s by ranchers driving their cattle from Texas to the stockyards and railroad termini in Kansas. The trail was named for Jesse Chisholm who operated trading posts along much of the route.

19. Capital of Ghana ACCRA
Accra sits on Ghana’s coast and is a major seaport as well as the country’s capital city. The name “Accra” comes from a local word “Nkran” meaning “ants”, a name chosen because of the large number of anthills found in the area when the city was founded.

25. Blue Ribbon beer PABST
Pabst Blue Ribbon is the most recognizable brand of beer from the Pabst Brewing Company. There appears to be some dispute over whether or not Pabst beer ever won a “blue ribbon” prize, but the company claims that it did so at the World’s Columbian Exposition in Chicago in 1893. The beer was originally called Pabst Best Select, and then just Pabst Select. With the renaming to Blue Ribbon, the beer was sold with an actual blue ribbon tied around the neck of the bottle until it was dropped in 1916 and incorporated into the label.

28. Palm Pilot, e.g., briefly PDA
The Palm Pilot was one of the most successful PDAs (personal digital assistants) in its day.

33. Attributive menu words A LA
The phrase “in the style of” can be translated in “alla” in Italian and “à la” in French.

34. Parisian partings ADIEUS
“Adieu” is the French for “goodbye” or “farewell”, from “à Dieu” meaning “to God”. The plural of “adieu” is “adieux”.

44. Stevenson title doctor JEKYLL
Robert Louis Stevenson’s novella “The Strange Case of Dr. Jekyll and Mr. Hyde” was first published in 1886. There are many tales surrounding the writing of the story including one that the author wrote the basic tale in just three to six days, and spent a few weeks simply refining it. Allegedly, Stevenson’s use of cocaine stimulated his creative juices during those few days of writing.

47. WWII espionage gp. OSS
The Office of Strategic Services (OSS) was formed during WWII in order to carry out espionage behind enemy lines. A few years after the end of the war the OSS functions were taken up by a new group, the Central Intelligence Agency that was chartered by the National Security Act of 1947.

48. Bugs and Jags AUTOS
VW stands for Volkswagen, which translates from German into “people’s car”. The original Volkswagen design was the Beetle and was built under a directive from Adolf Hitler, who wanted a cheap car built that ordinary people could afford to purchase. He awarded the contract to engineer Ferdinand Porsche, whose name (paradoxically) would forever be associated with high performance, expensive cars. The Beetle was the official name of the VW model released in North America, but it was usually referred to as a “Bug” here in the US, and a “Beetle” elsewhere in the world.

50. “Fire” bugs ANTS
Fire ants are stinging ants, many species of which are called red ants. Most stinging ants bite their prey and then spray acid on the wound. The fire ant however, bites to hold on and then injects an alkaloid venom from its abdomen, creating a burning sensation in humans that have been nipped.

52. Bourgogne and Chablis VINS
“Vin” is French for “wine”.

The Burgundy region of France is famous for its wine production. If you’re looking at a label that isn’t translated into English though, you’ll see Burgundy written in French, namely “Bourgogne”.

Chablis wine comes from the Chablis region that is the most northerly wine district in the Burgundy region of France. Chablis is a dry white wine made mainly from Chardonnay grapes.

54. Longstocking of kiddie lit PIPPI
Pippi Longstocking appears as the heroine in a series of books written by Swedish author Astrid Lindgren. Lindgren was quite the activist, very well known in the circles working for children’s and animal rights, In particular, Lindgren campaigned heavily against corporal punishment.

61. NBA great Shaquille O’NEAL
Retired basketball player Shaquille O’Neal now appears regularly as an analyst on the NBA TV show “Inside the NBA”. Shaq has quite a career in the entertainment world. His first rap album, called “Shaq Diesel”, went platinum. He also starred in two of his own reality show: “Shaq’s Big Challenge” and “Shaq Vs.”

66. Humdinger LULU
We call a remarkable thing or a person a “lulu”. The term is used in honor of Lulu Hurst, a stage magician active in the 1880s who was also known as the Georgia Wonder.

A “humdinger” or a “pip” is someone or something outstanding. Humdinger is American slang dating back to the early 1900s, originally used to describe a particularly attractive woman.

Down
1. Stereotypical “Dahling!” speaker SNOB
Back in the 1780s, a “snob” was a shoemaker or a shoemaker’s apprentice. By the end of the 18th century the word was being used by students at Cambridge University in England to refer to all local merchants and people of the town. The term evolved to mean one who copies those who are his or her social superior (and not in a good way). From there it wasn’t a big leap for “snob” to include anyone who emphasized their superior social standing and not just those who aspired to rank. Nowadays a snob is anyone who looks down on those considered to be of inferior standing.

3. General Mills brand CHEX
The original Chex cereal was introduced in 1937 by Ralston Purina, although it is now produced by General Mills. Ralston Purina had a logo with a checkerboard square on it, which gave the pattern to the cereal as well as its name. Chex used characters from the “Peanuts” comic strip in its advertising for many years.

6. Capital on the Seine PARIS
The French capital of Paris is named for the Parisii, a Celtic Iron Age people that lived in the area on the banks of the River Seine.

8. Grab from the grill, as a hot dog TONG
A pair of tongs is a tool with a scissor-like hinge used to pick up things, like meat cooking on a barbecue grill or ice from an ice bucket. The verb “to tong” means “to handle with tongs”.

9. Poetry Muse ERATO
In Greek mythology, Erato was the Muse of Lyric Poetry.

11. *Wishful lifetime agenda BUCKET LIST (giving “bucket seat”)
A “bucket list” is a list of things one wants to achieve before dying, before “kicking the bucket”. The expression hasn’t been used in this context for very long, only a decade or so, and was popularized by the 2007 film “The Bucket List” starring Jack Nicholson and Morgan Freeman.

25. Old Turkish title PASHA
A “pasha” was a high-ranking official in the Ottoman Empire, roughly equivalent to the English rank of “lord”.

27. *Slapstick slipping cause BANANA PEEL (giving “banana seat”)
A “banana seat” is a long saddle on bicycle, often seen on what are called wheelie bikes.

31. Typical Hitchcock role CAMEO
Even in my day, a cameo role was more than just a short appearance in a movie (or other artistic piece). For the appearance to be a cameo, the actor had to playing himself or herself, and was instantly recognizable. With this meaning it’s easy to see the etymology of the term, as a cameo brooch is one with the recognizable carving of the silhouette of a person. Nowadays, a cameo is any minor role played by a celebrity or famous actor, regardless of the character played.

35. Martial arts schools DOJOS
The Japanese word “dojo” literally means “place of the way”. Originally the term applied to training halls that were found in or beside temples. The teaching in a dojo was not limited to the martial arts, but in the Western world we use the dojo as the name for a training facility for judo, karate and the like.

36. Currier’s colleague IVES
Currier and Ives was a printmaking concern in New York City, run by Nathaniel Currier and his partner James Merritt Ives from 1834 to 1907. The firm specialized in making affordable, hand-colored black and white lithographs.

53. Agenda bullets ITEMS
“Agenda” is a Latin word that translates as “things to be done”, coming from the verb “agere” meaning “to do”.

57. Nesting site, perhaps EAVE
The eaves are the overhanging edges of a roof that project beyond the supporting wall. The term “eaves” evolved from the Old English “efes” meaning “edge.

58. Essence CRUX
“Crux” is the Latin word for “cross”, and came into English meaning “a central difficulty” in the early 1700s.