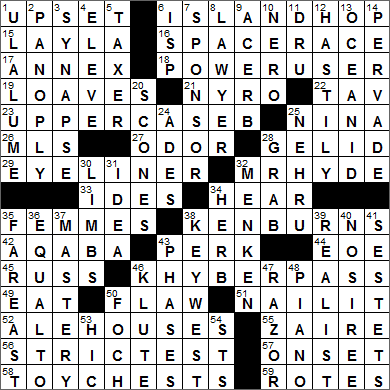 6. Change keys often? ISLAND-HOP
A “key” (also “cay”) is a low island offshore, as in the Florida Keys. Our term in English comes from the Spanish “cayo” meaning “shoal, reef”.

15. “You’ve got me on my knees” woman in a 1971 hit LAYLA
“Layla” is one of the great rock anthems of the seventies, released by Derek and the Dominos in December of 1970. It is a masterpiece of composition, with the first half of the song a great vehicle for the guitar-playing talents of Eric Clapton. The second half is a beautifully melodic piano coda (a coda … taking up half the length of the track!). To top things off we have the “unplugged” version recorded by Clapton in 1992, a fabulous and inventive variation on the original.

18. Unix guru, e.g. POWER USER
Unix is a computer operating system that was developed at Bell Labs in 1969.

21. “Wedding Bell Blues” songwriter NYRO
Laura Nyro was a singer-songwriter from the Bronx, New York. Nyro had success with her own recordings, but her songs were even more successful when recorded by other big names. Two of Nyro’s compositions were “Eli’s Coming” recorded by Three Dog Night, and “Stoney End” by Barbra Streisand.

23. eBay feature UPPERCASE B
The company name “eBay” features an uppercase letter B.

27. King ratsnake’s defense ODOR
The king ratsnake is native to Southeast and East Asia. It is also known as the “stink snake” and the “stinking goddess”, referring to the foul odor released from post-anal glands when threatened.

28. Arctic GELID
“Gelid” is such a lovely word, with the meaning “icy cold”. “Gelid” derives from the Latin “gelum” meaning “frost, intense cold”.

32. “Particularly small and particularly wicked-looking” villain MR HYDE
Robert Louis Stevenson’s novella “The Strange Case of Dr. Jekyll and Mr. Hyde” was first published in 1886. There are many tales surrounding the writing of the story including one that the author wrote the basic tale in just three to six days, and spent a few weeks simply refining it. Allegedly, Stevenson’s use of cocaine stimulated his creative juices during those few days of writing.

38. “The Roosevelts” documentarian KEN BURNS
Ken Burns directs and produces epic documentary films that usually make inventive use of archive footage. Recent works are the sensational “The War” (about the US in WWII) and the magnificent “The National Parks: America’s Best Idea”. Burns’ latest offering is 2014’s “The Roosevelts: An Intimate History”.

42. Jordan’s only port AQABA
The coastal city of Aqaba is the only seaport in the country of Jordan. The city lies at the very northern tip of the Gulf of Aqaba, which is off the Red Sea.

45. Tamblyn of “West Side Story” RUSS
Russ Tamblyn is an actor from Los Angeles who I know best from his performance in 1961’s “West Side Story” in which he played Riff, the leader of the Jets gang. More recently, Tamblyn played Dr. Lawrence Jacoby on the TV series “Twin Peaks”. Russ’s daughter is actress Amber Tamblyn, who plays the lead on the TV show “Joan of Arcadia”.

46. Silk Road component KHYBER PASS
The Khyber Pass is a famous mountain pass connecting Pakistan and Afghanistan through the Spin Ghar mountains. The Khyber Pass was crucial to the ancient Silk Road.

50. Bug FLAW
Back in 1947, the famed computer programmer Grace Hopper noticed some colleagues fixing a piece of equipment by removing a dead moth from a relay. She remarked that they were “debugging” the system, and so she has been given credit for popularizing the term.

52. Dogfish Head sellers ALEHOUSES
Dogfish Head is a brewery in Milton, Delaware that set up shop in 1995. The brewery is named for Dogfish Head in Maine, where the founder spent summers as a child.

55. Mobutu’s land ZAIRE
Mobutu Sese Seko was the longtime President of Zaire (later to be called the Democratic Republic of the Congo). Mobutu was known to be a very corrupt dictator and it is believed that he embezzled over $5 billion from his country. On a lighter note, Mobutu was the money man behind the famous 1974 boxing match between Muhammad Ali and George Foreman known as “The Rumble in the Jungle”. Mobutu was anxious to expand the image of Zaire so he used his nation’s funds to entice the fighters to have a go at each other in his homeland.

58. Slinky spots TOY CHESTS
The marvelous Slinky toy was invented in the early forties by a naval engineer called Richard James. James was developing springs for the navy that could stabilize sensitive instruments in rough seas. One day he accidentally knocked one of his experimental coils off a shelf and watched it “step” onto a stack of books, then onto a table and from there onto the floor where it recoiled itself very neatly. The Slinky was born …

Down
1. Poe title answer to ” … ‘What is written … / On the door of this legended tomb?'” ULALUME
“Ulalume” is a poem written by Edgar Allen Poe in 1847. The poem’s line “in the ghoul-haunted woodland of Weir” is quoted in another respected work, Tennessee Williams’ “A Streetcar Named Desire”. Blanche Dubois says that her sister, Stella, lives “in the ghoul-haunted woodland of Weir”, a nod to “Ulalume”.

2. Impressive array PANOPLY
“Panoply” originally described the complete set of armor of a warrior, with the term coming from the Greek “pan-”meaning “all” and “hopla” meaning “arms”. We’ve been using “panoply” to mean “any splendid array” since the 1820s.

3. Neural junction SYNAPSE
A synapse is a junction between a nerve cell and another cell over which an electrical or chemical signal can pass.

4. Professeur’s charge ELEVE
In French, a “professeur” (teacher) in France should show concern for his élèves (pupils).

6. Juno, e.g.: Abbr. ISP
Juno is an Internet Service Provider (ISP) that was founded in 1996 and is based in Newark, New Jersey.

8. Many a president LAWYER
The former occupations of the US presidents is a varied list, with most common profession being lawyer. Some other occupations were:

9. Having a bite ACERB
“Acerb” is a variant of “acerbic”, meaning sour or bitter-tasting, acidic.

10. 50s-60s emperor NERO
Nero was Emperor of Rome from 54 to 68 CE. Nero had quite the family life. When he was just 16-years-old he married his step-sister Claudia Octavia. He also had his mother and step-brother executed.

11. R&B group __ Hill DRU
Dru Hill is an R&B singing group from Baltimore, Maryland. Dru Hill was formed in 1992, and is still going strong today. The name “Dru Hill” comes from Druid Hill Park which is found on the west side of Baltimore.

13. Mythological sea nymph OCEANID
In Greek and Roman mythology, the 3,000 daughters of the Titans Oceanus and Tethys were sea nymphs known as the Oceanids. The couple also had 3,000 sons, the river gods known as the Potamoi.

25. Prime minister sworn in by Mountbatten NEHRU
Jawaharlal Nehru was the very first prime minister of India, serving from 1947-64. Nehru was basically the heir to his mentor, Mahatma Gandhi. Nehru’s only daughter, Indira, also became prime minister (known as Indira Gandhi, though she was no relation to Mahatma).

Louis Mountbatten was the uncle of Prince Philip, the husband of Queen Elizabeth II. Mountbatten held many influential posts in the British Government. He was the last Viceroy of India in the late forties and oversaw the transition of India to independence and the end of the British Raj. In the 1950s, he was First Sea Lord, the head of the Royal Navy. Mountbatten was assassinated by the Irish Republican Army in 1979, while holidaying in his summer home in the West of Ireland.

34. Wormwood, e.g. HERB
Wormwood is an ornamental plant and herb that is used as an ingredient in absinthe. As a herb, wormwood has been used as an antiparasitic drug, consumed in order to expel parasitic worms. That usage gave rise to the name “wormwood”.

35. China setting FAR EAST
In geographical terms there are three “Easts”. The Near East and Middle East are terms that are often considered synonymous, although “Near East” tends to be used when discussing ancient history and “Middle East” when referring to the present day. The Near/Middle East encompasses most of Western Asia and Egypt. The term “Far East” describes East Asia (including the Russian Far East), Southeast Asia and South Asia.

38. Site of Truman’s winter White House KEY WEST
After President Harry S. Truman’s was in office for 19 months he was physically exhausted, and so his doctor prescribed a warm-weather vacation. The president used a government property in Key West, Florida for his recuperation, and continued to use it for additional visits twice a year for the duration of his presidency. Originally built in 1890 as officer’s quarters for a submarine base, the facility became known as the Little White House.

41. Sonnet parts SESTETS
A sestet is a group of six lines of poetry similar to a quatrain, a group of four lines.

A sonnet is a short poem with varying rhyming schemes but always with 14 lines. The sonnet form has been around at least since the 13th century. The Shakespearean sonnet is composed of three quatrains (4 lines) and a final couplet (2 lines).

48. Schroeder’s love PIANO
Schroeder is a favorite character of mine in the comic strip “Peanuts”. He is young boy who constantly plays on a toy piano, especially pieces by Beethoven. Schroeder also has an extreme infatuation with Lucy van Pelt.

54. D and C, in D.C. STS
Famously, the layout of the streets in Washington was designed by French-born American architect Pierre Charles L’Enfant. The L’Enfant Plan called for a grid of east-west and north-south streets. This grid was criss-crossed with diagonal avenues. The avenues and streets met at circles and rectangular plazas. The east-west streets are generally named for letters, while the north-south streets are numbered. Later, many of the diagonal avenues were named for states of the union.