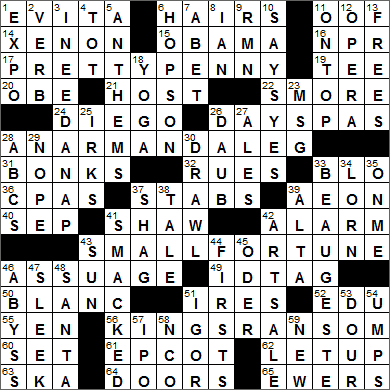 CROSSWORD SETTER: Bruce Haight
THEME: Tidy Sums … each of today’s themed answers is an idiomatic phrase meaning “TIDY SUM, lots of money”. Each themed clue references both “tidy sum” and a literal allusion from the phrase:

14. Noble gas XENON
Xenon was the first of the noble gases to be made into a compound, which was somewhat remarkable in that the noble gases were thought by many to be completely inert, nonreactive.

15. Former Illinois senator OBAMA
President Obama served three terms in the Illinois State Senate, from 1997 to 2004. The future President ran unsuccessfully for the US House of Representatives in 2000, and then successfully for the US Senate in 2004. Famously, State Senator Obama delivered the keynote address to the Democratic National Convention in 2004, just a few months before winning that US Senate seat.

16. “Wait Wait…Don’t Tell Me!” network NPR
Chicago Public Radio produces one of my wife’s favorite shows, “Wait Wait… Don’t Tell Me!” It is indeed a fun game show, hosted by Peter Sagal. The “Morning Edition” newsreader Carl Kasell used to act as judge and scorekeeper, until he retired in 2014. There should be more game shows of that ilk on the radio in my humble opinion …

20. “Most Excellent” U.K. award OBE
The Most Excellent Order of the British Empire is an order of chivalry in the UK that was established in 1917 by King George V. There are five classes within the order, which are in descending seniority:

21. Emcee HOST
The term “emcee” comes from “MC”, an initialism standing for Master or Mistress of Ceremonies.

22. Gooey treat S’MORE
S’mores are treats peculiar to North America, usually eaten around a campfire. A s’more consists of a roasted marshmallow and a layer of chocolate sandwiched between two graham crackers. The earliest written reference to the recipe is in a 1927 publication called “Tramping and Trailing with the Girl Scouts”. Girl Scouts always did corner the market on cookies and the like!

24. Muralist Rivera DIEGO
Diego Rivera was a Mexican painter, famous for his murals. His wife was an equally famous Mexican artist, Frida Kahlo.

39. Many millennia AEON
Geological time is divided into a number of units of varying lengths. These are, starting from the largest:

40. Fall mo. SEP
The month of September is the ninth month in our year, although the name “September” comes from the Latin word “septum” meaning “seventh”. September was the seventh month in the Roman calendar until the year 46 BC when Julius Caesar introduced the Julian calendar. The Julian system moved the start of the year from March 1st to January 1st, and shifted September to the ninth month. The Gregorian calendar that we use today was introduced in 1582.

41. Only person to win both an Academy Award and a Nobel Prize SHAW
George Bernard Shaw (GBS) is the only person to have won both a Nobel Prize and an Academy Award. He was awarded the Nobel Prize in Literature in 1925, and the Oscar for Best Adapted Screenplay in 1938 for “Pygmalion”. Al Gore came close to the same achievement. Gore won the Nobel Peace Prize in 2007, and he gave an acceptance speech after “An Inconvenient Truth” won the 2006 Oscar for Best documentary Feature. Even though Gore “starred” in the documentary and wrote the original book “An Inconvenient Truth”, the Academy Award went to director Davis Guggenheim.

43. Tidy sum, to a soothsayer? SMALL FORTUNE
A “soothsayer” is someone who claims to have the ability to predict the future. The term comes from “sooth”, an archaic word for “truth”. So a soothsayer was supposedly one who told the “truth” (about the future).

49. Baggage carousel aid ID TAG
Apparently the baggage carousel was developed by a French company. The first installation was in Paris Orly Airport in the 1950s.

52. Kin of org EDU
The .edu domain was one of the six original generic top-level domains specified. The complete original list is:

55. Japanese capital YEN
The Korean Won, the Chinese Yuan, and the Japanese Yen (all of which are Asian currencies) take their names from the Chinese written character that represents “round shape”.

61. Theme park with a geodesic sphere EPCOT
EPCOT Center (now just called Epcot) is the theme park beside Walt Disney World in Florida. EPCOT is an acronym standing for Experimental Prototype Community of Tomorrow, and is a representation of the future as envisioned by Walt Disney. Walt Disney actually wanted to build a living community for 20,000 residents at EPCOT, but he passed away before that vision could be realized.

The term geodesic applied originally to the shortest route between any two points on the Earth’s surface. In this sense, a geodesic is an arc, a segment of a great circle that goes around the whole of the Earth. A geodesic dome is a structure that gets its strength from an interlocking network of triangular elements. The sides of those triangles are geodesics, arced segments of great circles that encompass the dome.

63. Calypso cousin SKA
Ska originated in Jamaica in the late fifties and was the precursor to reggae music. No one has a really definitive etymology of the term “ska”, but it is likely to be imitative of some sound.

The musical style of calypso originated in Trinidad and Tobago, but there seems to be some debate about which influences were most important as the genre developed. It is generally agreed that the music was imported by African slaves from their homeland, but others emphasize influences of the medieval French troubadours. To me it sounds more African in nature. Calypso reached the masses when it was first recorded in 1912, and it spread around the world in the thirties and forties. It reached its pinnacle with the release of the famous “Banana Boat Song” by Harry Belafonte.

64. They may be Dutch DOORS
A Dutch door has a top and a bottom equally divided in area. There is a suggestion that the term “go Dutch” originated with the Dutch door. The bill is “split”, and so are Dutch doors. That said, when people “go Dutch” they each pay for themselves, as opposed to even splitting the tab.

Down
5. Country music? ANTHEMS
The word “anthem” used to describe a sacred song, especially one with words taken from the Scriptures. The British national anthem (“God Save the Queen/King”) technically is a hymn, and so it came to be described as the “national hymn” and eventually “national anthem”. The use of the word “anthem” extended from there to describe any patriotic song.

“The Vampire Diaries” is a series of horror novels by L. J. Smith that is aimed at teens. There is a spinoff television series of the same name. I don’t do vampires …

9. LBJ successor RMN
President Richard Milhous Nixon (RMN) used “Milhous” in his name in honor of his mother Hannah Milhous. Richard was born in a house in Yorba Linda, California. You can visit that house today as it is on the grounds of the Richard Nixon Presidential Library. It’s a really interesting way to spend a few hours if you ever get to Yorba Linda …

President Lyndon Johnson (LBJ) is one of only four people to have held all four elected federal offices, namely US Representative, US Senator, US Vice-President and US President. As President, LBJ is perhaps best remembered for escalating involvement in the Vietnam War, and for his “Great Society” legislation.

18. Meditative practice YOGA
In the West we tend to think of yoga as a physical discipline, a means of exercise that uses specific poses to stretch and strengthen muscles. While it is true that the ancient Indian practice of yoga does involve such physical discipline, the corporeal aspect of the practice plays a relatively small part in the whole philosophy. Other major components are meditation, ethical behavior, breathing and contemplation.

23. Flavor intensifier MSG
Monosodium glutamate (MSG) is the sodium salt of a naturally-occurring,non-essential amino acid called glutamic acid. It is used widely as a flavor enhancer, particularly in many Asian cuisines. Whether or not it is harmful seems to be still under debate. I say that something produced in a test tube shouldn’t be in our food …

26. Smear DAUB
“To daub” is to coat a surface with something thick and sticky, like say plaster or mud.

Nantes is a beautiful city located on the delta of the Loire, Erdre and Sèvre rivers. It has the well deserved nickname of “The Venice of the West”. I had the privilege of visiting Nantes a couple of times on business, and I can attest that it really is a charming city.

37. Thick carpet SHAG
Shag carpet is one with a deep pile, one with a “shaggy” appearance.

38. Grimm story TALE
The Brothers Grimm (Jacob and Wilhelm) were two German academics noted for collecting and publishing folk tales. Among the tales in their marvelous collection are “Snow White and the Seven Dwarfs”, “Sleeping Beauty” and “Cinderella”.

39. Ski resort near Salt Lake City ALTA
Alta ski resort actually lies within the Salt Lake City Metropolitan Area. The first ski lift in the resort was opened way back in 1939. Today, Alta is one of only three ski resorts in the country that prohibits snowboarding (along with Deer Valley, Utah and Mad River Glen, Vermont. The ski resort of Snowbird located next to Alta has been in operation since 1971.

45. Frankfurt’s river ODER
Frankfurt an der Oder is a town in Brandenburg, Germany that is right on the border with Poland. The suffix “an der Oder” shows that it lies on the Oder River and also serves to differentiate the town from the larger and more famous city of Frankfurt am Main.

48. Blitzen’s boss SANTA
We get the names for Santa’s reindeer from the famous 1823 poem called “A Visit from St. Nicholas”, although we’ve modified a couple of the names over the years. The full list is:

51. “Young Frankenstein” role IGOR
I am not really a big fan of movies by Mel Brooks, but “Young Frankenstein” is the exception. I think the cast has a lot to do with me liking the film, as it includes Gene Wilder (Dr. Frankenstein), Teri Garr (Inga), Marty Feldman (Igor) and Gene Hackman (Harold, the blind man).

Two extra umpires are added for particularly crucial fixtures, such as post-season games:

57. Wall St. debut IPO
An Initial Public Offering (IPO) is the very first offer of stock for sale by a company on the open market. In other words, an IPO marks the first time that a company is traded on a public exchange. Companies have an IPO to raise capital to expand (usually).

58. Sgt. or cpl. NCO
An NCO is a non-commissioned officer in the armed forces. Usually such an officer is one who has earned his or her rank by promotion through the enlisted ranks. A good example would be a sergeant (sgt.) or a corporal (cpl.).