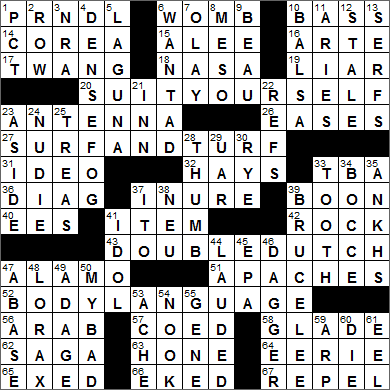 Today’s Wiki-est, Amazonian Googlies
Across
1. Gearshift letters PRNDL
PRNDL … that would be Park, Reverse, Neutral, Drive and Low. The gear shift for an automatic transmission is sometimes known familiarly as the “prindle stick”, from the abbreviation PRNDL.

10. Largemouth fish BASS
The largemouth bass is a freshwater fish that isn’t a bass at all, but rather is a member of the sunfish family.

14. Pianist Chick with 22 Grammys COREA
Chick Corea is an American jazz pianist. Corea is noted for his work in the area of jazz fusion, as well as for his promotion of Scientology.

15. Sheltered, at sea ALEE
“Alee” is the direction away from the wind. If a sailor points into the wind, he or she is pointing “aweather”.

16. Johnson of “Laugh-In” ARTE
Arte Johnson, as well being a frequent judge on “The Gong Show”, played the German soldier on “Rowan & Martin’s Laugh-In”. Johnson’s character’s famous catchphrase was, “Very interesting, but …”

17. Banjo sound TWANG
The instrument that we know today as the banjo is a derivative of instruments that were used in Africa.

18. Org. with many long missions NASA
The Soviet Union launched the Sputnik satellite towards the end of 1957, a development that shocked the establishment in the US. Within months, President Eisenhower created the Advanced Research Projects Agency (ARPA, now DARPA) and the National Aeronautics and Space Administration (NASA). The Space Race had begun …

23. Old TV-top receiver ANTENNA
Remember the television antenna called a “rabbit ears”? I don’t recall being told this when I was younger, but to get the best reception the length of the “ears” needs to be set at about one half of the wavelength of the signal of the target channel. If only I had known …

32. “Airplane!” actor Robert HAYS
The 1980 movie “Airplane!” has to be one of the zaniest comedies ever made. The lead roles were Ted Striker (played by Robert Hays) and Elaine Dickinson (played by Julie Hagerty). But it was Leslie Nielsen who stole the show, playing Dr. Barry Rumack. That’s my own humble opinion of course …

33. “We don’t know yet,” in a TV schedule TBA
Something not yet on the schedule (sked) is to be advised (TBA).

41. Tabloid twosome ITEM
An unmarried couple known to be involved with each other might appear in the gossip columns. This appearance as “an item” in the papers, led to the use of “item” to refer to such a couple, but only since the very early seventies.

47. Texas landmark ALAMO
The famous Alamo in San Antonio, Texas was originally known as Mission San Antonio de Valero. The mission was founded in 1718 and was the first mission established in the city. The Battle of the Alamo took place in 1836, a thirteen-day siege by the Mexican Army led by President General Antonio Lopez de Santa Anna. Only two people defending the Alamo Mission survived the onslaught. One month later, the Texian army got its revenge by attacking and defeating the Mexican Army in the Battle of San Jacinto. During the surprise attack on Santa Anna’s camp, many of the Texian soldiers were heard to cry “Remember the Alamo!”.

51. Two-man Army helicopters APACHES
The 4-bladed Apache helicopter was introduced back in 1975 as a replacement for the 2-bladed Cobra. The Apache first entered service in 1986, and is still very much in use, mainly with the US Army, the Israel Air Force, the Egyptian Air Force and the Royal Netherlands Air Force.

56. Spirited horse ARAB
The Arab (or Arabian) breed of horse takes its name from its original home, the Arabian Peninsula. Like any animal that humans have over-bred, the horse falls prey to genetic diseases, some of which are fatal and some of which require the horse to be euthanized.

58. PlugIns Scented Oil maker GLADE
Glade is a brand of air fresheners that was first introduced in 1956.

5. Southern California’s __ Beach LAGUNA
Laguna Beach is seaside resort city in Orange County in southern California. The city takes its name from nearby Laguna Canyon, and was originally known as Lagonas.

7. Skin care brand with an Active Botanicals line OLAY
Oil of Olay was developed in South Africa in 1949. When Oil of Olay was introduced internationally, it was given slightly different brand names designed to appeal in the different geographies. In Ireland we know it as Oil of Ulay, for example, and in France it is Oil of Olaz.

9. Sweetheart BEAU
A “beau” is the boyfriend of a “belle”, a young lady. “Beau” and “belle” are the masculine and feminine forms of the French word for “handsome, beautiful”.

10. Lightweight wood BALSA
Balsa is a very fast growing tree that is native to parts of South America. Even though balsa wood is very soft, it is actually classified as a hardwood, the softest of all the hardwoods (go figure!). Balsa is light and strong, so is commonly used in making model airplanes. Amazingly, in WWII a full-size British plane, the de Havilland Mosquito, was built largely from balsa and plywood. No wonder they called it “The Wooden Wonder” and “The Timber Terror”.

11. Ram in the sky ARIES
The constellation of Aries has come to represent the ram that yielded the Golden Fleece of Greek mythology.

13. Feudal servants SERFS
A serf was a member of the lowest feudal class, someone attached to land owned by a lord. “Serf” comes from the Latin “servus”, meaning “slave”.

22. Two-legged zebras? REFS
A football referee is sometimes called a “zebra”, a reference to the striped shirt that is part of a referee’s uniform.

28. Green digit? THUMB
To have a “green thumb” or “green fingers” is to be good at gardening.

29. Onetime Egypt-Syria fed. UAR
The United Arab Republic (UAR) was a union between Egypt and Syria made in 1958 and dissolved in 1961 when Syria pulled out of the arrangement.

34. Lawn bowling game BOCCE
The Italian bowling game of “bocce” (anglicized as “bocci”) is based on a game played in Ancient Rome. “Bocce” is the plural of the Italian word “boccia” meaning “bowl”.

35. Pharaohs’ crosses ANKHS
The ankh was the ancient Egyptian hieroglyphic character for “eternal life”. The ankh wasn’t just used in inscriptions but was often fashioned into amulets and as surrounds for mirrors (perhaps symbolizing a view into another world). The ankh is also known as “the key of the Nile” and “crux ansata” (Latin for “cross with a handle”).

37. Norah Jones’ “What Am __ You?” I TO
The beguiling Norah Jones is the daughter of famous sitar virtuoso Ravi Shankar, and is one of my favorite singers. If you haven’t heard Jones sing her song “Come Away with Me”, you just haven’t lived …

38. Modern, in Munich NEU
Munich is the capital of the German state of Bavaria, and is the third largest city in the country (after Berlin and Hamburg). The city is called “München” in German, a term that derives from the Old German word for “by the monks’ place”, which is a reference to the monks of the Benedictine order who founded the city in 1158.

39. “Enter the Dragon” martial artist BRUCE LEE
Bruce Lee was born not far from here in San Francisco although he was raised in Hong Kong, returning to the US to attend college. Sadly, Bruce Lee died when he was only 32 years old, due to cerebral edema (a swelling of the brain) attributed to adverse reactions to the pain killing drug Equagesic. Lee’s last film was 1973’s martial arts movie “Enter the Dragon”.

48. Seuss’ environmental advocate LORAX
“The Lorax” is a children’s book written by Dr. Seuss. It is an allegorical work questioning the problems created by industrialization, and in particular its impact on the environment. At one point in the story, the Lorax “speaks for the trees, for the trees have no tongues”. “The Lorax” was adapted into an animated film that was released in 2012, with Danny DeVito voicing the title character.

55. Trait carrier GENE
A gene is a section of a chromosome that is responsible for a particular characteristic in an organism. For example, one gene may determine eye color and another balding pattern. We have two copies of each gene, one from each of our parents, with each copy known as an allele.

59. Dadaist Jean ARP
Hans Arp was a French artist renowned for his work with torn and pasted paper, although that wasn’t the only medium he used. Arp was the son of a French mother and German father and spoke both languages fluently. When he was speaking German he gave his name as Hans Arp, but when speaking French he called himself Jean Arp. Both “Hans” and “Jean” translate into English as “John”. In WWI Arp moved to Switzerland to avoid being called up to fight, taking advantage of Swiss neutrality. Eventually he was told to report to the German Consulate and fill out paperwork for the draft. In order to get out of fighting, Arp messed up the paperwork by writing the date in every blank space on the forms. Then he took off all of his clothes and walked with his papers over to the officials in charge. Arp was sent home …

60. Yahtzee cube DIE
The dice game of Yahtzee was introduced in 1956, a variant of earlier dice games, especially the game “Yacht” (which even has a similar name). Yahtzee is required playing in our house at holidays. The game involves the rolling of five dice, with the intent of getting certain combinations. A lot of those combinations resemble poker hands, such as “three of a kind”, “four of a kind” and “full house”.