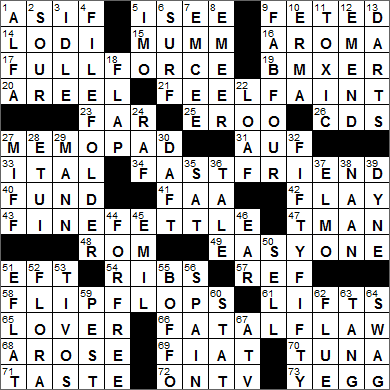 Today’s Wiki-est, Amazonian Googlies
Across
14. New Jersey or California city LODI
Lodi, New Jersey was named in honor of the city of Lodi in Italy. One of Lodi’s claims to fame is that it is home to the Satin Dolls go-go bar, which was used for location shoots for the fictional Bada Bing bar in “The Sopranos”.

Lodi, California may not be as well known a wine producer as Sonoma and Napa counties, but has been given the moniker “Zinfandel Capital of the World”.

15. French champagne maker founded in Germany MUMM
G. H. Mumm is one of the largest Champagne producers in the world. It is located in Reims in northern France and was actually founded by three brothers from Germany, all winemakers from the Rhine Valley.

19. Olympic racer since 2008 BMXER
BMX stands for Bicycle Motocross. It’s the sport where folks on bicycles race around what is in effect a regular motocross track. Medals were awarded for BMX for the first time at the Beijing Olympics, with a Latvian winning for the men, and a Française winning for the women.

31. __ Wiedersehen AUF
“Auf Wiedersehen” is German for “goodbye”, literally translating as “till we see each other again”.

33. Lang. of Florence ITAL
Florence is the capital city of the Tuscany region in Italy. Something from or related to Florence is described as “Florentine”. The city is known as “Firenze” in Italian.

40. Slush __ FUND
A “slush fund” is a sum of money that is held in reserve, or in the case of illicit dealings, that is used for paying bribes. The term originated in at sea, with “slush” referring to the fat skimmed from the top of a pot of boiling salted meat. A cook might sell the fat to tallow makers and the money earned was his “slush fund”.

41. JFK overseer FAA
The Federal Aviation Administration (FAA) was set up in 1958 (as the Federal Aviation Agency). The agency was established at that particular time largely in response to an increasing number of midair collisions. The worst of these disasters had taken place two years earlier over the Grand Canyon, a crash between two commercial passenger airplanes that resulted in 128 fatalities.

The Idlewild Golf Course was taken over by the city of New York in 1943 and construction started on a new airport to serve the metropolis and relieve congestion at La Guardia. The Idlewild name still persists, even though the airport was named after Major General Alexander E. Anderson from the first days of the project. When the facility started operating in 1948 it was known as New York International Airport, Anderson Field. It was renamed to John F. Kennedy International Airport (JFK) in 1963, one month after the President was assassinated.

47. IRS agent T-MAN
A T-man is a law-enforcement agent of the US Treasury (T is for Treasury).

48. Ukr. neighbor ROM
Romania sits just east of Hungary and north of Bulgaria in Europe. Romania was formed from the union of two principalities in 1859, Moldavia and Wallachia. The Kingdom of Romania grew larger in size after WWI with the addition of three new regions, including the “vampirish” Transylvania.

Ukraine is a large country in Eastern Europe, in fact the largest country located entirely within the continent. In English we often call the country “the” Ukraine, but I am told that we should just say “Ukraine”.

51. Little newt EFT
Newts wouldn’t be my favorite animals. They are found all over the world living on land or in water depending on the species, but always associated with water even if it is only for breeding. Newts metamorphose through three distinct developmental stages during their lives. They start off as larvae in water, fertilized eggs that often cling to aquatic plants. The eggs hatch into tadpoles, the first developmental form of the newt. After living some months as tadpoles swimming around in the water, they undergo another metamorphosis, sprouting legs and replacing their external gills with lungs. At this juvenile stage they are known as efts, and leave the water to live on land. A more gradual transition takes place then, as the eft takes on the lizard-like appearance of the adult newt.

66. Achilles’ heel FATAL FLAW
Achilles is a Greek mythological figure, the main protagonist of Homer’s “Iliad”. Supposedly when Achilles was born his mother attempted to make him immortal by dipping him into the River Styx. As he was held by the heel as he was immersed, this became the only vulnerable point on his body, his “Achilles’ heel”. Years later he was killed when a poisoned arrow struck him in the heel. The arrow was shot by Paris.

69. Italian automaker since 1899 FIAT
Fiat is the largest car manufacturer in Italy, and is headquartered in Turin in the Piedmont region in the north of the country. Fiat was founded in 1899 by Giovanni Agnelli, when the company’s name was “Fabbrica Italiana di Automobili Torino” (FIAT). A few years ago, Fiat became the majority shareholder in Chrysler.

73. Safecracker YEGG
“Yegg” is a slang word for a burglar and often for a safe-cracker. The origin of the term appears to be unknown.

Down
1. __ Romeo: sports car ALFA
The “Alfa” in Alfa Romeo is actually an acronym, standing for Anonima Lombarda Fabbrica Automobili (“Lombard Automobile Factory, Public Company”). ALFA was an enterprise founded in 1909 and which was taken over by Nicola Romeo in 1915. In 1920 the company name was changed to Alfa Romeo.

7. Oscars host, e.g. EMCEE
The term “emcee” comes from “MC”, an initialism standing for Master or Mistress of Ceremonies.

8. Mideast VIP EMEER
An “emir” is a head of state in some Islamic countries. In English, emir can also be written as emeer, amir and ameer (watch out for those spellings in crosswords!).

9. British Invasion nickname FAB FOUR
The Beatles were described on the sleeve notes of their 1963 album “With the Beatles” as the “fabulous foursome”. The press picked up on the phrase and morphed it into “the Fab Four”.

12. Correct, as text EMEND
The verb “to amend” means “to change for the better, put right, alter by adding”. The related verb “to emend” is used more rarely and mainly in reference to the editing of professional writing. Both terms are derived from the Latin “emendare” meaning “to remove fault”.

13. Game that drives home a point? DARTS
Darts is a wonderful game, often played in English and Irish pubs, even over here in America. The scoring in a traditional game of darts is difficult to describe in a sentence or two, but the game of darts called “Round the Clock” is simply hitting the numbers 1 through 20 in sequence.

22. Pumpernickel buy LOAF
The lovely bread known as pumpernickel is made with a recipe that originates in the Westphalia region of Germany. The version of the bread that we eat in North America has been adapted over the years from the original recipe, largely to produce a cheaper product. If you taste the European version beside the American version, it’s hard to believe they have the same origins. The etymology and literal translation of “pumpernickel” seems to be unclear, although there are some interesting suggestions given that I won’t repeat here, especially as they have to do with “the devil’s flatulence!”

24. U.K. fliers RAF
The Royal Air Force (RAF) is the oldest independent air force in the world (i.e. the first air force to become independent of army or navy forces). The RAF was formed during WWI on 1 April 1918, a composite of two earlier forces, the Royal Flying Corps (part of the Army) and the Royal Naval Air Service. The RAF’s “finest hour” has to be the Battle of Britain when the vastly outnumbered British fighters fought off the might of the Luftwaffe causing Hitler to delay his plan to cross the English Channel. This outcome prompted Winston Churchill to utter the memorable words:
Never in the field of human conflict was so much owed by so many to so few.

28. Storage case for tiny scissors ETUI
An etui is an ornamental case used to hold small items, in particular sewing needles. We imported both the case design and the word “etui” from France. The French also have a modern usage of “etui”, using the term to depict a case for carrying CDs.

29. “Death in Venice” author Thomas MANN
Thomas Mann was a German novelist whose most famous work is probably his novella “Death in Venice”, originally published in German in 1912 as “Der Tod in Venedig”. The story was famously adapted for the big screen in 1971, in a movie starring Dirk Bogarde.

37. Giggly Muppet ELMO
The man behind/under the character Elmo on “Sesame Street” is Kevin Clash. If you want to learn more about Elmo and Clash, you can watch the 2011 documentary “Being Elmo: A Puppeteer’s Journey”.

38. Tandoori bread NAAN
Naan (also “nan”) bread is very popular in Indian restaurants, as well as in other West, Central and South Asian cuisines. Indian Naan is traditionally baked in a clay oven known as a tandoor.

39. Physics unit DYNE
A dyne is a unit of force. The name “dyne” comes from the Greek “dynamis” meaning “power, force”.

53. Records for later, in a way TIVOS
TiVo was introduced in 1999 and was the world’s first commercially successful DVR (Digital Video Recorder).

55. Super, at the box office BOFFO
“Boffo” is show biz slang for “very successful”, a term that dates back to the early sixties.

56. Where rain falls mainly on the plain SPAIN
“The Rain in Spain” is a song from the 1956 Lerner & Loewe musical “My Fair Lady”. The famous lyric “The rain in Spain stays mainly in the plain” appears in the 1938 film “Pygmalion”, but not in the original 1913 George Bernard Shaw play “Pygmalion”, on which all the derivative works are based.

60. Doc’s “Now!” STAT!
The exact etymology of “stat”, a term meaning “immediately” in the medical profession, seems to have been lost in the mists of time. It probably comes from the Latin “statim” meaning “to a standstill, immediately”. A blog reader has helpfully suggested that the term may also come from the world of laboratory analysis, where the acronym STAT stands for “short turn-around time”.

62. Santa’s access FLUE
The flue in a chimney is a duct that conveys exhaust gases from a fire to the outdoors. An important feature of a flue is that it is adjustable. When starting a fire, the flue should be wide open, maximizing airflow to get help ignition. When the fire is burning, flow through the flue should be more restricted. The flue needs to be open sufficiently to allow smoke and exhaust gases exit, but not too wide so that too much hot air escapes, dragging cold air into the house from elsewhere.

64. Loot SWAG
“Swag” is “loot, stolen property”, a term that started out as criminal slang in England in the 1830s. Swag is also the name given to the promotional freebies available at some events.