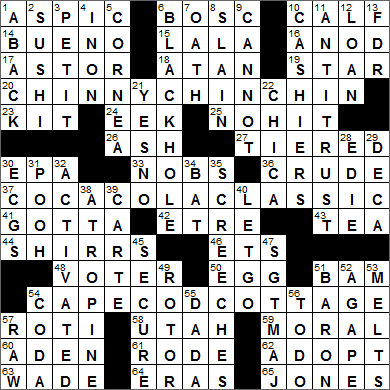 Today’s Wiki-est, Amazonian Googlies
Across
1. Jellied garnish ASPIC
Aspic is a dish in which the main ingredients are served in a gelatin made from meat stock. “Aspic” is a French word for “jelly”.

6. Northwestern pear BOSC
Bosc is a cultivar of the European Pear grown in the northwest of the United States. The Bosc is that pear with a skin the color of a potato, with a long neck. I always seem to use the potato as my point of reference. How Irish am I …?

14. Good, in Granada BUENO
Granada is a city and province in Andalusia in the south of Spain. Granada should not to be confused with Grenada (note the different spelling), the island nation in the Caribbean that was invaded by the US in 1983.

17. Trader for whom a northwest Oregon city was named ASTOR
John Jacob Astor was the father of the famous American Astor dynasty. He was the country’s first multi-millionaire, making his fortune in the trade of fur, real estate and opium. In today’s terms, it has been calculated that by the time of his death he has accumulated a fortune big enough to make him the fourth wealthiest man in American history (in the company of the likes of Andrew Carnegie, Cornelius Vanderbilt, Bill Gates, Henry Ford and John D. Rockefeller).

The city of Astoria, Oregon started out as Fort Astoria in 1810. Fort Astoria was a fur-trading post built by John Jacob Astor’s Pacific Fur Company, hence the “Astoria” name.

18. __ impasse AT AN
“Impasse” is a French word for a blind alley or an impassable road, and we use the term to mean “stalemate”.

19. Texas flag symbol STAR
The single star on the state flag of Texas is a reminder of the “lone star” on the 1836 National Standard of Texas. The single gold star on a blue background symbolized Texas as an independent republic and its struggle for independence from Mexico.

23. Baby beaver KIT
Beavers are monogamous and mate for life. The offspring of a beaver couple are called kits.

44. Bakes, as 50-Acrosses SHIRRS
Shirred eggs are eggs that have been baked without their shells in a flat-bottomed dish. The term “shirred” comes from the name of the dish that was traditionally used for the baking.

54. Provincetown rental CAPE COD COTTAGE
Provincetown is located at the very tip of Cape Cod. As a major vacation destination, Provincetown has a summer population of up to 60,000 people, dropping to under 3,000 off season. The land now called Provincetown was the original “Cape Cod” back in the early 1600s. It wasn’t until much later that the Cape Cod name was applied to the entire region.

58. Antelope Island state UTAH
Antelope Island is the largest of ten islands located in the Great Salt Lake. However, the island regularly becomes a peninsula when the lake is at low water levels.

60. Arabian Peninsula port ADEN
Aden is a seaport in Yemen, located on the Gulf of Aden by the eastern approach to the Red Sea. Aden has a long history of British rule, from 1838 until a very messy withdrawal in 1967. A native of Aden is known as an Adeni. Some believe that Cain and Abel are buried in the city.

64. Mesozoic and Paleozoic ERAS
The Mesozoic Era is also known as the Age of the Dinosaurs, as most dinosaurs developed during that time and the era ended with the extinction of all dinosaurs (except the avian species, which developed into our modern birds). The Mesozoic Era started with another cataclysmic event, the so called “Great Dying”, the largest mass extinction in the history of our planet. During the “Great Dying” over 90% of all marine species and 70% of all terrestrial vertebrate species died off.

The Paleozoic Era (with “Paleozoic” meaning “ancient life”) was a geologic era from roughly 542 to 251 million years ago. Notably in the Paleozoic Era, fish populations thrived and vast forests of primitive plants covered the land. Those forests were the source material for the coal which we dig out of the ground now in Europe and the eastern parts of North America. At end of the Paleozoic Era was the largest mass extinction in the history of the Earth, killing off 96% of all marine species, and 70% of all terrestrial vertebrates. Causes of the extinction have been suggested, with one hypothesis being gradually accelerating climate change (scary!).

65. Slangy craving JONES
The slang term “Jones” is used to mean an intense addiction, a yen, and probably arose in the late sixties out of the prior use of “Jones” for the drug heroin.

Down
2. Japanese finger food SUSHI
Traditionally, sushi has been consumed as a finger food. However, chopsticks are commonly used these days in Japan, and almost always Japanese restaurants in the West.

3. __ four: teacake PETIT
A “petit four” is a small confection served at the end of a meal, either as a dessert or with coffee. The name “petit four” is French for “small oven”.

5. Eye part CORNEA
The cornea is the transparent part of the eye in the front, covering the iris and the pupil. Even though the cornea is not part of the lens it acts as a lens, and in fact does most of the work focusing light coming in through the eye. The cornea is in effect a fixed-focus lens passing on light to the variable-focus lens that is inside the eye.

6. Subject for Stephen Hawking BLACK HOLE
A black hole in space is a region that is extremely dense and one that has an enormous gravitational field. The force of gravity is so great that not even light can escape, so all that can be observed is “blackness”, which gives the phenomenon the name of “black hole”. It is believed that black holes form when large stars reach the end of their lives and collapse in upon themselves.

Stephen Hawking is a theoretical physicist from Oxford, England. Hawking owes much of his fame in the world of popular science to his incredibly successful book called “A Brief History of Time”. “A Brief History of Time” has sold over 10 million copies and was on London’s “Sunday Times” bestseller list for over four years. Hawking does a wonderful job of explaining many aspects of cosmology without losing the average reader. There is only one equation in the whole book, and that equation is “E = mc2”. Hawking’s life story is recounted in the excellent 2014 film “The Theory of Everything”.

11. Like the Sherman Act ANTITRUST
The Sherman Antitrust Act dates back to 1890. The act makes it illegal for companies to seek a monopoly or to form cartels. It is named for US Senator John Sherman , the principal author of the act.

13. New Deal pres. FDR
The New Deal was the series of economic programs championed by President Franklin D. Roosevelt in response to the Great Depression. The New Deal was focused on three objectives, the “3 Rs”:

22. Spanish girl CHICA
In Spanish, a “niña” is a young girl, a child. The term “chica” applies to an older girl or perhaps a young woman.. The term “muchacha” applies to girls in general, I think …

29. Prefix with pod DECA-
Decapods are crustaceans, including crayfish, crabs, lobsters, prawns and shrimp. The name of the order Decapoda implies that the creatures have ten legs. The three front pairs of legs function as mouthparts, and often, one pair of legs include enlarged pincers.

30. They record beats per min. ECGS
An EKG measures electrical activity in the heart. Back in my homeland of Ireland, an EKG is known as an ECG (for electrocardiogram). We use the German name in the US, Elektrokardiogramm, giving us EKG. Apparently the abbreviation EKG is preferred as ECG might be confused (if poorly handwritten, I guess) with EEG, the abbreviation for an electroencephalogram.

31. Friend of Tigger POOH
Tigger is a character in the “Winnie-the-Pooh” stories by A. A. Milne. He is a tiger with a springy tail and just loves to bounce around. Tigger will tell you himself that “bouncing is what tiggers do best.”

34. Compete in a box BAT
That would be in baseball …

38. Medication used for dilating pupils ATROPINE
The medication atropine is usually synthesised although it is also found naturally in a number of plants in the nightshade family. One topical use of atropine is to dilate the pupils of the eye, as it temporarily paralyzes the ciliary muscles that control the size of the opening in the iris.

39. Bistro offering CARTE
“Carte” is a word sometimes used in French for a menu. Menu items that are “à la carte” are priced and ordered separately, as opposed to “table d’hôte” which is a fixed price menu with limited choice.

47. High-ranking NCO SGT MAJ
An NCO is a non-commissioned officer in the armed forces. Usually such an officer is one who has earned his or her rank by promotion through the enlisted ranks. A good example would be a sergeant major (sgt. maj.).

49. Turbine blade ROTOR
A turbine is a machine uses the flow of a fluid (sometimes air) to create rotational work. Simple examples of turbines are windmills and waterwheels.

51. Industry honcho BARON
“Honcho” is a slang term for a leader or manager. The term comes to us from Japanese, in which language a “hancho” is a squad (han) leader (cho).

53. Runs down the mountain, maybe MELTS
Snowmelt runs down a mountain as the weather warms.

54. Musical finale CODA
In music, a coda is primarily a passage that brings a movement to a conclusion. “Coda” is Italian for “tail”.

55. Man Ray genre DADA
Dadaism thrived during and just after WWI, and was an anti-war, anti-bourgeois and anti-art culture. The movement began in Zurich, Switzerland started by a group of artists and writers who met to discuss art and put on performances in the Cabaret Voltaire, frequently expressing disgust at the war that was raging across Europe.

Man Ray was an American modernist artist who spent most of his working life in Paris. Man Ray was born in South Philadelphia in 1890, and his real name was Emmanuel Radnitzky. His family shortened “Radnitzky” to “Ray” in response to the anti-Semitic feeling that was prevalent at the time. Emmanuel was known as “Manny”, and he decided to assume the name Man Ray and use it for his work.