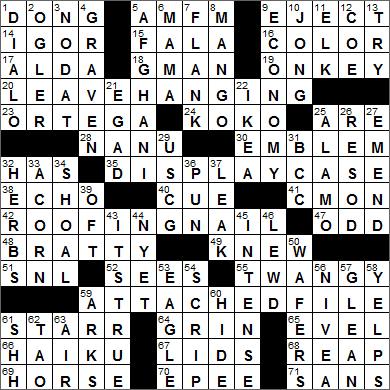 15. “Deck the Halls” syllables FA LA
The music for “Deck the Halls” is a traditional Welsh tune that dates back to the 16th century. The same tune was used by Mozart for a violin and piano duet. The lyrics with which we are familiar (other than the “tra-la-la”) are American in origin, and were recorded in 19th century.

17. “The West Wing” actor Alan ALDA
Alan Alda has had a great television career, especially of course on “M*A*S*H”. Alda won his first Emmy in 1972, for playing Hawkeye Pierce on “M*A*S*H”. He won his most recent Emmy in 2006 for his portrayal of Presidential candidate Arnold Vinick in “The West Wing”. When it comes to the big screen, my favorite of Alda’s movies is the 1978 romantic comedy “Same Time, Next Year” in which he starred opposite Ellen Burstyn.

18. Fed. agent G-MAN
The nickname “G-men” is short for “Government Men” and refers to agents of the Federal Bureau of Investigation.

23. Maker of Fiesta Flats taco shells ORTEGA
The Ortega food manufacturing company has been around for about 150 years. It was founded by Maria Concepcion Jacinta Dominguez Ortega, known affectionately as Mama Ortega within the company.

24. Gorilla who learned sign language KOKO
Koko is a female Lowland Gorilla that lives in Woodside, California. The researcher Penny Patterson taught Koko to speak a modified form of American Sign Language (ASL) that she called Gorilla Sign Language. Koko can apparently use over a thousand signs.

28. Half a Mork-to-Orson farewell NANU
“Mork & Mindy” is a sitcom that originally aired from 1978 to 1982. The title characters were played by Robin Williams and Pam Dawber. Mork is an alien from the planet Ork who reports back to his superior called Orson. Orson is played by voice actor Ralph James. Ralph James was also known for providing the voice of Mr Turtle in famous Tootsie Pop commercials in the seventies. Nanu nanu!

47. Roulette bet ODD
The name “roulette” means “little wheel” in French, and the game as we know it today did in fact originate in Paris, in 1796. A roulette wheel bears the numbers 1-36. A French entrepreneur called François Blanc introduced the number “0” on the wheel, to give the house an extra advantage. Legend has it that Blanc made a deal with the devil in order to unearth the secrets of roulette. The legend is supported by the fact that the numbers 1 through 36 add up to a total of “666”, which is the “Number of the Beast”. Spooky …

51. Weekly NBC offering since 1975, briefly SNL
NBC first aired a form of “Saturday Night Live” (SNL) in 1975 under the title “NBC’s Saturday Night”. The show was actually created to give Johnny Carson some time off from “The Tonight Show”. Back then “The Tonight Show” had a weekend episode, and Carson convinced NBC to pull the Saturday or Sunday recordings off the air and hold them for subsequent weeknights in which Carson needed a break. NBC turned to Lorne Michaels and asked him to put together a variety show to fill the vacant slot, and he came up with what we now call “Saturday Night Live”.

61. Drummer Ringo STARR
Ringo Starr’s real name is Richard Starkey. Before he joined the Beatles (replacing drummer Pete Best), Starkey played with the Raving Texans. It was with the Raving Texans that he adopted the name “Ringo Starr”, because he wore a lot of rings and he thought it sounded “cowboyish”. Back then his drum solos were billed as “Starr Time”.

65. First name in bike stunts EVEL
Daredevil Evel Knievel contracted hepatitis C from the many blood transfusions that he needed after injuries incurred during stunts. He had to have a liver transplant as a result, but his health declined after that. Knievel eventually passed away in 2007.

66. Japanese verse HAIKU
A haiku is a very elegant form of Japanese verse. When writing a haiku in English we tend to impose the rule that the verse must contain 17 syllables. This restriction comes from the rule in Japanese that the verse must contain 17 sound units called “moras”, but moras and syllables aren’t the same thing. What the difference is though, is not so clear to me. Here’s an example of a Haiku:

67. Tupperware tops LIDS
Back in the 1930s, Earl Tupper was working at the DuPont Chemical Company, and from DuPont obtained inflexible pieces of polyethylene slag. Tupper purified the slag and shaped it into unbreakable containers. He added airtight lids with a “burping seal”, which were provided tight seals similar to that provided by the lids on paint cans. He called his new product Tupperware.

69. Kentucky Derby racer HORSE
The first Kentucky Derby was run in 1875, and is a race modelled on the Epsom Derby in England and the Grand Prix de Paris (now called the “Prix de l‘Arc de Triomphe”). As such, The Kentucky Derby was run over 1½ miles, although in 1896 this was shortened to 1¼ miles. The winning horse is presented with a very elaborate blanket made of red roses.

71. Lacking, in Lorraine SANS
The historical region of Lorraine is in the northeast of France, where it borders Belgium, Luxembourg and Germany. The largest city in Lorraine is Nancy, although the region’s capital is Metz.

5. Kabul native AFGHANI
Kabul is the capital and largest city of Afghanistan. The city has been the site of major conflict for much of the 3,500 years that it has been in existence. In the past, this conflict was mainly driven by the city’s strategic location on the major trade routes of south and central Asia.

11. Antlered animal ELK
The elk (also known as the wapiti) is the one of the largest species of deer in the world, with only the moose being bigger. Early European settlers were familiar with the smaller red deer back in their homelands, so when they saw the “huge” wapiti they assumed it was a moose, and incorrectly gave it the European name for a moose, namely “elk”. The more correct name for the beast is “wapiti”, which means “white rump” in Shawnee. It’s all very confusing …

12. Two-time 1500-meter gold medalist Sebastian COE
Sebastian Coe is a retired middle distance runner from the UK who won four Olympic medals including golds in the 1500m in 1980 and 1984. After retiring from athletics, Coe went into politics and served as a Member of Parliament from 1992 to 1997. In the year 2000, he was made a Life Peer, and so Coe now sits in the House of Lords. Lord Coe headed up London’s successful bid to host the 2012 Summer Olympic Games.

25. Texas tourist spot ALAMO
The famous Alamo in San Antonio, Texas was originally known as Mission San Antonio de Valero. The mission was founded in 1718 and was the first mission established in the city. The Battle of the Alamo took place in 1836, a thirteen-day siege by the Mexican Army led by President General Antonio Lopez de Santa Anna. Only two people defending the Alamo Mission survived the onslaught. One month later, the Texian army got its revenge by attacking and defeating the Mexican Army in the Battle of San Jacinto. During the surprise attack on Santa Anna’s camp, many of the Texian soldiers were heard to cry “Remember the Alamo!”

27. Revise EMEND
The verb “to amend” means “to change for the better, put right, alter by adding”. The related verb “to emend” is used more rarely and mainly in reference to the editing of professional writing. Both terms are derived from the Latin “emendare” meaning “to remove fault”.

29. Shoreline protection gp. USCG
The US Coast Guard (USCG) has the distinction of being the country’s oldest continuous seagoing service. The USCG was founded as the Revenue Cutter Service by Alexander Hamilton in 1790. The USCG motto is “Semper Paratus”, a Latin phrase meaning “Always Prepared”.

31. Discreetly send a dupe email to BCC
A blind carbon copy (bcc) is a copy of a document or message that is sent to someone without other recipients of the message knowing about that extra copy.

36. Lewis Carroll specialty PUN
Lewis Carroll was the pen name of Charles Lutwidge Dodgson. He was born in 1832 in the village of Daresbury near Warrington in the county of Cheshire, in the northwest of England. And, let’s not forget one of Carroll’s most beloved characters, the Cheshire Cat.

I was lucky enough to visit the Moscow Kremlin as a tourist a few decades ago. The Kremlin sits right on Red Square, along with Saint Basil’s Cathedral and the famed GUM department store. “Kremlin” is a Russian word for “fortress”.

46. R-rated, perhaps LEWD
The Motion Picture Association of America’s (MPAA) film-rating system (PG-13, R, etc.) is purely voluntary and is not backed by any law. Movie theaters agree to abide by the rules that come with the MPAA ratings in exchange for access to new movies.

54. Rx, for short SCRIP
“Scrip” is an informal term for a prescription.

59. Sacred chests ARKS
According to the Book of Exodus, the stone tablets on which the Ten Commandments are inscribed were placed in a chest called the Ark of the Covenant. The Ark was built according to instructions given by God to Moses on Mount Sinai.

62. Confucian “path” TAO
The Chinese character “tao” translates as “path”, but the concept of Tao signifies the true nature of the world.