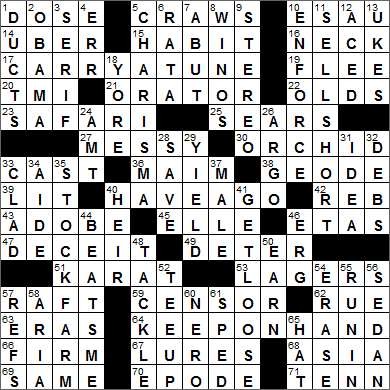 64A. Make available, as merchandise … and a hint to the start of the answers to starred clues KEEP ON HAND

Today’s Wiki-est, Amazonian Googlies
Across
5. Metaphorical sticking points CRAWS
“Craw” is another name for the “crop”, a portion of the alimentary tract of some animals, including birds. The crop is used for the storage of food prior to digestion. The crop allows the animal to eat large amounts and then digest that food with efficiency over an extended period. The expression “to stick in one’s craw” is used one when one cannot accept something, cannot “swallow” it.

10. Jacob’s twin ESAU
Esau was the twin brother of Jacob, the founder of the Israelites. When their mother Rebekah gave birth to the twins “the first emerged red and hairy all over (Esau), with his heel grasped by the hand of the second to come out (Jacob)”. As Esau was the first born, he was entitled to inherit his father’s wealth (it was his “birthright”). Instead, Esau sold his birthright to Jacob for the price of a “mess of pottage” (a meal of lentils).

14. App that connects riders with drivers UBER
Uber is a ridesharing service that was founded in 2009 and is based in San Francisco. The service is somewhat controversial and has been described as an illegal taxicab operation. Central to Uber’s service is the company’s mobile app, which can use the client’s GPS location to help find the nearest available ride. Personally, I love the service, and only have had good experiences …

16. Prominent giraffe feature NECK
The giraffe is the tallest terrestrial animal on the planet. The giraffe’s main source of food is acacia leaves that they eat from high, high up in trees, where other herbivores cannot reach.

19. Skedaddle FLEE
“Skedaddle ” is a slang term meaning “run away” that dates back to the Civil War.

22. Cutlass automaker OLDS
Oldsmobile made the Cutlass Ciera from 1982 to 1996. The Ciera was the brand name’s most successful model.

30. Corsage flower ORCHID
“Corsage” is a word we imported from French in the late 15th century. Back then we used it to mean “the size of the body”. By the early 1800s a corsage was a bodice, or the body of a woman’s dress. At the beginning of the 20th century, the French term “bouquet de corsage” was being used for a “bouquet worn on the bodice”, and this has been shortened simply to “corsage”.

38. Crystal-bearing rock GEODE
A geode is a rock in which there is a cavity lined or filled with crystal formations.

42. Civil War soldier REB
During the Civil War, the personification of the Southern states was “Johnny Reb”. The northern equivalent was Billy Yank.

43. Desert building brick ADOBE
The building material known as adobe has been around a long time, and has been used in dry climates all over the world. The original form of the word “adobe” dates back to Middle Egyptian times, about 2000 BC. The original spelling is “dj-b-t”, and translates as mud (sun-dried) brick.

45. Fashion magazine that’s also a French pronoun ELLE
“Elle” magazine was founded in 1945 in France and today has the highest circulation of any fashion magazine in the world. “Elle” is the French word for “she”. “Elle” is published monthly worldwide, although you can pick up a weekly edition if you live in France.

51. 24-__ gold KARAT
A karat (also “carat”, the spelling outside of North America) is a measure of the purity of gold alloys, with 24-karat representing pure gold.

53. Draft choices LAGERS
Lager is so called because of the tradition of cold-storing the beer during fermentation. “Lager” is the German word for “storage”.

59. One with a bleeping job CENSOR
The original “censor” was an officer in ancient Rome who had responsibility for taking the “census”, as well as supervising public morality.

68. Continent explored by Marco Polo ASIA
Marco Polo was a merchant from Venice and a famous traveler throughout Asia. Polo journeyed with his father and uncle on an epic tour of Central Asia and China that lasted 24 years. Marco tends to be the member of the party we remember today though, because it was he who documented their travels in a book called “Il Milione”.

70. Lyric poem EPODE
An epode is a lyric poem made up of couplets in which the first line is long, and the second line much shorter. The form was invented by the Greek poet Archilochus, and was most famously used by the Roman poet Horace.

Down
3. Sans __: type style SERIF
Serifs are details on the ends of characters in some typefaces. Typefaces without serifs are known as sans-serif, using the French word “sans” meaning “without” and “serif” from the Dutch “schreef” meaning “line”.

9. Hi-fi system STEREO
Monophonic sound (“mono”) is sound reproduced using just one audio channel, which is usually played out of just one speaker. Stereophonic sound is reproduced using two audio channels, with the sound from each channel played out of two different speakers. The pair of stereo speakers are usually positioned apart from each other so that sound appears to come from between the two. Quadraphonic sound (4.0 surround sound) uses four audio channels with the sound played back through four speakers often positioned at the corners of the room in which one is listening.

Hi-fi systems were introduced in the late forties, and is audio equipment designed to give a much higher quality reproduction of sound than cheaper systems available up to that point. “Hi-fi” stands for “high fidelity”.

13. Luau instruments UKES
The ukulele (“uke”) originated in the 1800s and mimicked a small guitar brought to the Hawaiian Islands by Portuguese immigrants.

26. Constellation named for a mythological ship ARGO
In Greek mythology, Jason and the Argonauts sailed on the Argo in search of the Golden Fleece. The vessel was called the “Argo” in honor of the ship’s builder, a man named Argus.

The constellation Argo Navis (“Argo the Ship” in Latin) is divided into three parts: Puppis (“The Poop Deck”), Vela (“The Sails”) and Carina (“The Keel”).

32. Belles at balls DEBS
Deb is short for “debutante”, which translates from French as “female beginner”.

46. Unit of work ERG
An erg is a unit of mechanical work or energy. It is a small unit, as there are 10 million ergs in one joule. it has been suggested that an erg is about the amount of energy required for a mosquito to take off.

56. Family auto SEDAN
The American “sedan” car is the equivalent of the British “saloon” car. By definition, a sedan car has two rows of seating and a separate trunk (boot in the UK), although in some models the engine can be at the rear of the car.

60. Fictional sleuth Wolfe NERO
Nero Wolfe is a fictional detective and the hero of many stories published by author Rex Stout. There are 33 Nero Wolfe novels for us to read, and 39 short stories. There are also movie adaptations of two of the novels: “Meet Nero Wolfe” (1936) which features a young Rita Hayworth, and “The League of Frightened Men” (1937). One of Wolfe’s endearing traits is his love of good food and beer, so he is a pretty rotund character.