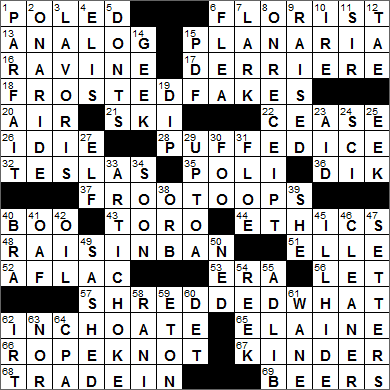 CROSSWORD SETTER: Jeffrey Wechsler
THEME: Letter Missing in Cereal … today’s themed answers are the names of breakfast cereals, but with a letter missing:

Today’s Wiki-est, Amazonian Googlies
Across
1. Did a gondolier’s job POLED
The word “gondola” was originally limited to the famous boats that travel along the canals of Venice. When man started to fly through the air in hot air balloons, “gondola” was used for the basket in which the passenger(s) traveled. By extension, the structure carrying passengers and crew under an airship is also called a gondola, as are the cars suspended from a cable at a ski resort.

18. Knockoff cereal? FROSTED FAKES (from “Frosted Flakes”)
Tony the Tiger has been the mascot of Frosted Flakes cereal since the product’s introduction in 1951. As Tony would say, “They’re Gr-r-reat!” Well, I thought they were when I was a lot younger …

20. Swift’s medium AIR
Swifts are birds that are related to hummingbirds. Swifts are aptly named, with larger swift species clocked at airspeeds of over 100 miles/hour.

26. “And if __, no soul shall pity me”: King Richard III I DIE
“Richard III” is one of the more famous of William Shakespeare’s historical plays. A well-known 1955 version of the play was made for the big screen with Laurence Olivier playing the title role. The most oft-quoted words from “Richard III” are probably the opening lines “Now is the winter of our discontent/Made glorious summer by this sun of York”, and Richard’s plea at the climax of battle “A horse, a horse, my kingdom for a horse!”

32. Charged wheels TESLAS
Tesla Motors is a manufacturer of electric vehicles based in Palo Alto, California. Tesla is noted for producing the first electric sports car, called the Tesla Roadster. The current base price of a roadster is about $100,000, should you be interested …

36. Hägar creator Browne DIK
“Hagar the Horrible” is a comic strip that was created by the late Dik Browne and is now drawn by his son, Chris Browne. “Hagar the Terrible” (not “Horrible”) was the nickname given to Dik by his sons.

37. Recalled cereal? FROOT OOPS (from “Froot Loops”)
Froot Loops (ugh!) is a breakfast cereal from Kellogg’s that has been around since 1963. The little loops come in different colors, originally red, orange and yellow, but now there are green, purple and blue loops as well. Notice I said “different colors” not “different flavors”. Each loop tastes the same, so I wonder where the color comes from …?

52. MetLife competitor AFLAC
In 1999, Aflac was huge in the world of insurance but it wasn’t a household name, so a New York advertising agency was given the task of making the Aflac brand more memorable. One of the agency’s art directors, while walking around Central Park one lunchtime, heard a duck quacking and in his mind linked it with “Aflac”, and that duck has been “Aflacking” ever since …

56. Court mulligan LET
There doesn’t seem to be a definitive account for the origin of the term “Mulligan”, most often used for a shot do-over in golf. There are lots of stories about golfers named Mulligan though, and I suspect one of them may be true.

62. Disorganized INCHOATE
Something described as “inchoate” is rudimentary, or lacking order.

65. Emmy-winning role for Julia ELAINE
The character called Elaine Benes, unlike the other lead characters (Jerry, Kramer and George), did not appear in the pilot episode of “Seinfeld”. NBC executives specified the addition of a female lead when they picked up the show citing that the situation was too “male-centric”.

Down
1. Baskin-Robbins offering PARFAIT
A parfait is a frozen dessert made from sugar, syrup, egg and cream. The American version of this popular French dessert is a layered creation, featuring parfait cream, ice cream and flavored gelatins topped with whipped cream and possibly a liqueur. The term “parfait” is French for “perfect”.

3. Brand that’s swirled, not swallowed LAVORIS
Lavoris is a brand of mouthwash. Lavoris was introduced during the Civil War, when it was used as an antiseptic. It was repurposed as mouthwash in 1903.

4. Eero Saarinen and others ELIS
Eli is the nickname for a graduate of Yale University, a term used in honor of the Yale benefactor Elihu Yale.

11. Mr. Bumble, to Oliver Twist SIR
“Please, sir. I want some more” are words spoken by the title character in the novel “Oliver Twist” by Charles Dickens. . Oliver is addressing Mr. Bumble, asking for an extra helping of gruel in the workhouse.

12. __ Bo TAE
Tae Bo isn’t an ancient martial art, and rather was developed as a form of aerobic exercise in the 1990s. The discipline was introduced by taekwondo expert Billy Blanks who gave it the name Tae Bo, a melding of “taekwondo” and “boxing”.

15. Freebie from Adobe PDF
Portable Document Format (PDF) is a file format introduced by Adobe Systems in 1993. PDF documents can be shared between users and read using many different applications, making them more universally accessible than documents saved by one particular program.

27. Middle-earth figure ELF
Middle-earth is the setting for J. R. R. Tolkien’s fantasy novels “The Hobbit” and “The Lord of the Rings” series.

30. Rock’s __ Fighters FOO
Foo Fighters are described as an alternative rock band, one formed in 1994 by the drummer from Nirvana, Dave Grohl. The term “Foo fighters” originally applied to unidentified flying objects reported by allied airmen during WWII. Spooky …

40. It may be wired BRA
The word “brassière” is French in origin, but it isn’t the word the French use for a “bra”. In France what we call a bra is known as a “soutien-gorge”, translating to “held under the neck”. The word “brassière” is indeed used in France but there it describes a baby’s undershirt, a lifebelt or a harness. “Brassière” comes from the Old French word for an “arm protector” in a military uniform (“bras” is the French for “arm”). Later “brassière” came to mean “breastplate” and from there the word was used for a type of woman’s corset. The word jumped into English around 1900.

50. Neighbor of Homer NED
Ned Flanders lives next door to Homer on TV’s “The Simpsons”. Ned is voiced by actor Harry Shearer and has been around since the very first episode aired in 1989.

55. Response to a heckler AD LIB
“Ad libitum” is a Latin phrase meaning “at one’s pleasure”. In common usage the phrase is usually shortened to “ad lib”. On the stage the concept of an “ad lib” is very familiar.

58. Indian royal RANI
“Raja” (also “rajah”) is word derived from Sanskrit that is used particularly in India for a monarch or princely ruler. The female form is “rani” (also “ranee”) and is used for a raja’s wife.

59. “The most private of private schools,” to Hugh Laurie ETON
The world-famous Eton College is just a brisk walk from Windsor Castle, which itself is just outside London. Eton is noted for producing many British leaders including David Cameron who took power in the last UK general election. The list of Old Etonians also includes Princes William and Harry, the Duke of Wellington, George Orwell, and the creator of James Bond, Ian Fleming (as well as 007 himself as described in the Fleming novels).

62. NYC subway IRT
The Interborough Rapid Transit Company (IRT) was the original private operator of the New York Subway when it opened in 1904. The city took over ownership of the system in 1940, but the lines originally operated by the IRT are still known by the IRT moniker.