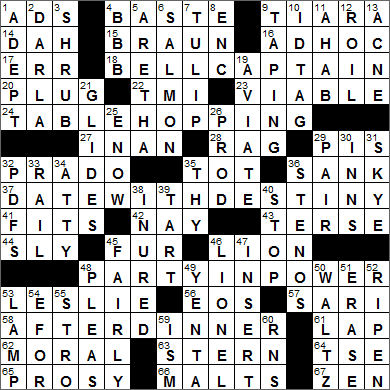 CROSSWORD SETTER: Mark McClain
THEME: After Dinner … each of today’s themed answers starts with a word that is often seen AFTER “DINNER”.

Today’s Wiki-est, Amazonian Googlies
Across
14. Morse code bit DAH
Dahs and dits are the sound equivalents of dashes and dots in Morse code.

15. Electric razor brand BRAUN
Braun is a manufacturer of consumer goods based in Kronberg, Germany.

16. Like some short-term committees AD HOC
The Latin phrase “ad hoc” means “for this purpose”.

18. Hotel lobby supervisor BELL CAPTAIN (giving “dinner bell”)
A bell captain supervises bellhops in a hotel. The term “bellhop” comes from the fact that the front desk clerk used to ring a “bell” to summon a porter, who then “hopped” to attention and received his or her instructions.

24. Working the room, as at a banquet TABLE-HOPPING (giving “dinner table”)
A banquet is an elaborate feast. “Banquet” is a term that seems to have reversed in meaning over time. Coming into English via French from Old Italian, “banquet” is derived from “banco” meaning “bench”. The original “banco” meal was simply a snack eaten on a bench, rather than at a table.

29. Gumshoes: Abbr. PIS
Gumshoe is a slang term for a private detective or private investigator (P.I.). Apparently the term “gumshoe” dates back to the early 1900s, and refers to the rubber-soled shoes popular with private detectives at that time.

32. Madrid museum PRADO
The Museo del Prado is in Madrid, the capital of Spain, and has one of the finest art collections in the world. The gallery’s most famous work is “Las Meninas” By Velazquez.

53. Nielsen of “The Naked Gun” films LESLIE
Leslie Nielsen was a Canadian actor, famous for playing the zany Sergeant Frank Drebin in “The Naked Gun”. Nielsen’s big break in films came in the innovative comedy “Airplane!”

56. Canon SLR camera EOS
I’ve been using Canon EOS cameras for decades now, and have nothing but good things to say about the cameras and the lenses. The EOS name stands for Electro-Optical System, and was chosen because it evokes the name of Eos, the Titan goddess of dawn from Greek mythology.

57. Indian wrap SARI
The item of clothing called a “sari” (also “saree”) is a strip of cloth, as one might imagine, unusual perhaps in that is unstitched along the whole of its length. The strip of cloth can range from four to nine meters long (that’s a lot of material!). The sari is usually wrapped around the waist, then draped over the shoulder leaving the midriff bare. I must say, it can be a beautiful item of clothing.

64. Mao __-tung TSE
Mao Zedong (also “Mao Tse-tung”) was born on December 16, 1893 in the Hunan Province of China. As Mao was the son of a peasant farmer, his prospects for education were limited. Indeed he left school at age 13 to work on the family farm but did eventually get to secondary school in Changsha, the provincial capital. In the years following, Mao continued his education in Beijing and actually turned down an opportunity to study in France.

65. Unlike poetry PROSY
Something that is “prosy” resembles prose. Also, “prosy” can be used to mean lacking impact or dry, prosaic in fact.

67. Buddhist sect ZEN
Zen is a Buddhist school that developed its own tradition in China back in the 7th century AD. Zen is a Japanese spelling of the Chinese word “chan”, which in turn derives from the Sanskrit word “dhyana” meaning “meditation”.

Down
2. “Our Gang” girl DARLA
Alfalfa’s love interest in “Our Gang” was Darla, whose real name was Darla Hood. Hood became quite a successful singer after she grew out of her “Our Gang” role.

4. Consumer protection gp. BBB
The Better Business Bureau is a private concern (nope, it is not a government agency), founded in 1912. It operates like a franchise, with local BBB’s managed independently but operating to a “corporate” set of guidelines.

5. “Respect” singer Franklin ARETHA
I think Aretha Franklin, the Queen of Soul, had a tough life. Franklin had her first son when she was just 13-years-old, and her second at 15. In 2008, “Rolling Stone” magazine ranked Franklin as number one in their list of the greatest singers of all time.

6. Upstream swimmer SALMON
When young salmon (born in freshwater) are at the smolt stage, they become adapted to saltwater and head for the sea. They return to freshwater to reproduce, often traveling long distances upstream.

7. Dutch bulb TULIP
Tulip festivals are held in a few cities around the world. The largest of these is the Canadian Tulip Festival that is held every year in the capital city of Ottawa. The tradition of growing tulips in Ottawa really started at the end of WWII. The Dutch royal family presented the city with 100,000 tulip bulbs as an act of thank for having sheltered Princess Juliana and her children while the Nazis occupied the Netherlands. The first Canadian Tulip Festival took place in 1953.

The “Encyclopædia Britannica” is the oldest English-language encyclopedia that is still being published. The final print edition was issued in 2010, a set of 32 volumes. The focus in recent years moved away from print and is on the online version of the encyclopedia.

11. Melville’s obsessive whaler AHAB
Captain Ahab is the obsessed and far from friendly captain of the Pequod in Herman Melville’s “Moby-Dick”. The role of Captain Ahab was played by Gregory Peck in the 1956 John Huston film adaptation. Patrick Stewart played Ahab in a 1998 miniseries in which Peck made another appearance, as Father Mapple.

13. Clearasil target ACNE
Clearasil acne medication was developed in 1940 by Ivan Combe and Kedzie Teller. Combe promoted the product by sponsoring the television show “American Bandstand” for many years.

25. Sufficient, in poetry ENOW
“Enow” is an archaic form of the word “enough”.

31. Hebrides isle SKYE
The Isle of Skye is off the northwest coast of Scotland in the Inner Hebrides. It is the second largest island in the country, and has been linked to the mainland by a road bridge since 1995. I’ve never been there, but I hear the views are spectacular.

32. Many emailed image files PDFS
Portable Document Format (PDF) is a file format introduced by Adobe Systems in 1993. PDF documents can be shared between users and read using many different applications, making them more universally accessible than documents saved by one particular program.

For thine is the kingdom,
The power, and the glory,
For ever and ever,
Amen

36. Dictation takers STENOS
Stenography is the process of writing in shorthand. The term comes from the Greek “steno” (narrow) and “graphe” (writing).

46. Big name in little trains LIONEL
Lionel is the name most associated with toy trains in the US. The first Lionel trains rolled off the production line in 1901 and they are still produced today, although the original Lionel Corporation is long gone. In 1995, the brand was bought by an investment company that included train enthusiast Neil Young (the singer), and operated as Lionel, LLC. Neil Young’s financial involvement ended after a 2008 reorganization of the company following a Chapter 11 bankruptcy filing, but the company is still producing and selling.

47. What an editor’s caret indicates INSERT
The character known as a caret was originally a proofreading mark, used to indicate where a punctuation mark was to be inserted. “Caret” is Latin for “it lacks”.

54. Get an __ effort E FOR
Apparently the phrase “E for effort” originated as a WWII campaign in the US to help boost productivity in factories.

55. Houston player, informally ‘STRO
The Houston baseball team changed its name to the Astros (sometimes “‘Stros”) from the Colt .45s in 1965 when they started playing in the Astrodome. The Astrodome was so called in recognition of the city’s long association with the US space program.