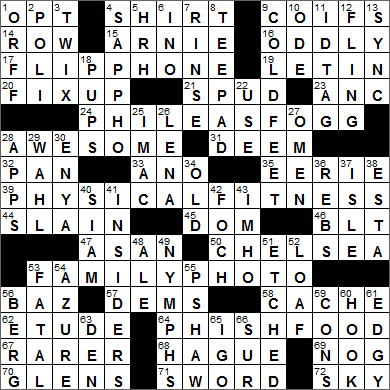 Today’s Wiki-est, Amazonian Googlies
Across
9. Salon creations COIFS
A “coif” is a hairdo. The term comes from an old French term “coife”, a skull-cap that was worn under a helmet back in the late 13th century.

15. Palmer with an “army” ARNIE
Arnold Palmer is one of the greats of the world of golf. Palmer is very popular with many fans of the game, and his followers are usually referred to as “Arnie’s Army”. Off the course, Palmer was an avid pilot, but is now retired from flying. He resides in Latrobe, Pennsylvania for much of the year and the local airport is named in his honor: Arnold Palmer Regional Airport.

21. Tater SPUD
The word “spud” is used as a slang term for a potato and was first recorded in the mid-1800s, in New Zealand would you believe?

24. Verne’s circumnavigator PHILEAS FOGG
“Around the World in 80 Days” is just a wonderful adventure story, written by French author Jules Verne and first published in 1873. There have been some great screen adaptations of the story, including the 1956 movie starring David Niven as Phileas Fogg. In almost all adaptations, a balloon is used for part of the journey, perhaps the most memorable means of transportation on Fogg’s trip around the world. However, if you read the book, Fogg never used a balloon at all.

32. All-Clad product PAN
All-Clad is a manufacturer of cookware based in Canonsburg, Pennsylvania.

33. Yucatán year ANO
The Yucatán Peninsula is located in southeastern Mexico, where it separates the Gulf of Mexico to the northwest from the Caribbean Sea to the southeast.

44. Done in by Buffy, say SLAIN
“Buffy the Vampire Slayer” is a TV series that originally aired from 1997 to 2003. “Buffy …” was incredibly successful, especially given that it wasn’t aired on the one of the big four networks. The show was created by Joss Whedon and starred Sarah Michelle Gellar in the title role.

45. __ Pérignon DOM
Dom Pérignon is the name given to the prestige label of champagne from Moët et Chandon, the French winery. The label’s name honors the Benedictine monk, Dom Pérignon, who helped to improve the quality and production of champagne in the early 18th century. Although Dom Pérignon made major contributions to champagne production, many of the stories in which he figures are just myths. He did not “invent” champagne, nor sparkling wine in general. Nor did he say the famous words, “Come quickly, I am drinking the stars!”. That lovely line first appeared in a print advertisement in the late 1800s!

46. Lunch letters BLT
The BLT (bacon, lettuce and tomato) is the second-most popular sandwich in the US, after the plain old ham sandwich.

47. Simile words … AS AN …
A simile is a figure of speech in which a comparison is made between two things that are unalike. For example, a person might be described as “cute as a kitten” or as “busy as a bee”.

50. Affluent London area CHELSEA
Chelsea is an area of central London located just north of the River Thames that is famous for its high property prices. Chelsea is also home to many expat Americans, who make up almost 7% of all the area’s residents.

“Moulin Rouge!” is musical film that was released in 2001, starring Nicole Kidman as the star of the Moulin Rouge cabaret, and Ewan McGregor as the young man who falls in love with her. Although set in the early 1900s, the film uses many, many contemporary songs. There were so many that it took the producers almost two years to secure the rights to use the music.

57. Most blue state electees: Abbr. DEMS
On political maps, red states are Republican and blue states Democrat. The designation of red and blue states is a very recent concept, only introduced in the 2000 presidential election by TV journalist, the late Tim Russert. In retrospect, the choice of colors is surprising, as in other democracies around the world red is usually used to describe left-leaning socialist parties (the reds under the bed!), and blue is used for conservative right-wing parties. In election cycles, swing/battleground states are often depicted in purple.

62. Piano exercise ETUDE
An étude is a short instrumental composition that is usually quite hard to play and is intended to help the performer master a particular technique. “Étude” is the French word for “study”. Études are commonly performed on the piano.

64. Ben & Jerry’s flavor inspired by a Vermont rock band PHISH FOOD
Phish is a rock and roll band that formed at the University of Vermont in 1983. After I hiatus from 2004 until 2009, the band is going strong to this day. The has been a “Phish Food” flavor of Ben & Jerry’s ice cream since 1997.

68. World Court site, with “The” HAGUE
Den Haag is the Dutch name for the city in the Netherlands that we know in English as The Hague. Even though The Hague is the seat of the Dutch parliament and is where Queen Beatrix resides, it is not the country’s capital city. That honor goes to Amsterdam.

International Court of Justice (ICJ) is commonly referred to as the World Court, and is based in the Hague in the Netherlands. The ICJ is the main judicial branch of the United Nations, and one of its functions is to settle disputes between UN member states. The US no longer accepts the jurisdiction of the ICJ, after the court’s 1986 decision that the US’s covert war against Nicaragua was in violation of international law. The UN Security Council is charged with enforcing ICJ rulings, and so the US used its veto power in the Nicaragua v. United States case.

69. Holiday drink NOG
It’s not really clear where the term “nog” (as in “eggnog”) comes from although it might derive from the word “noggin”, which was originally a small wooden cup that was long associated with alcoholic drinks.

Down
1. “Carmina Burana” composer ORFF
“Carmina Burana” is a cantata by Carl Orff based on a collection of medieval poems that go by the same name. The name translates as “Songs from Beuern”. The best known movement of the cantata by far is the dramatic “O Fortuna” used at the opening and closing of the piece. One study placed “O Fortuna” as the most often played piece of classical music in the UK over the past 75 years, largely due to its use in television commercials. Famously, the piece appeared in the US in ads for Gatorade and Old Spice aftershave.

3. Mars candy bar TWIX
I remember Twix bars from way back in 1967 when they were introduced in the British Isles. Twix bars made it to the US over a decade later, in 1979.

Forrest Mars, Sr. was the founder of the Mars Company. Forrest invented the Mars Bar while living over in England and then developed M&M’s when he returned to the US. Mars came up with the idea for M&M’s when he saw soldiers in the Spanish Civil War eating chocolate pellets. Those pellets had a hard shell of tempered chocolate on the outside to prevent them from melting. Mars got some of the funding to develop the M&M from William Murrie, the son of the president of Hershey’s Chocolate. It is the “M” and “M” from “Mars” and “Murrie” that give the name to the candy.

Prince William is second in line to the British throne, after his father Prince Charles, with Prince Harry holding the third spot. Prince Harry moved down the list when William and Kate had their first child George. The law was changed in 2011 so that the eldest child of Prince William and Kate Middleton would be next in line, regardless of sex. Up until 2011, sons took precedence, even over older daughters.

8. Starting point for Frisbee golfers TEE PAD
The Frisbee phenomenon started back in 1938 with a couple who had an upturned cake pan that they were tossing between each other on Santa Monica Beach in California. They were offered 25 cents for the pan on the spot, and as pans could be bought for 5 cents, the pair figured there was a living to be earned.

25. Apple variety IMAC
The iMac is a desktop computer platform from Apple introduced in 1998. One of the main features of the iMac is an “all-in-one” design, with the computer console and monitor integrated. The iMac also came in a range of colors, that Apple marketed as “flavors”, such strawberry, blueberry and lime.

26. Singer Horne LENA
Lena Horne was an American jazz singer, actress, dancer and civil rights activist. Horne started out her career as a nightclub singer and then began to get some meaty acting roles in Hollywood. However, she ended up on the blacklist during the McCarthy Era for expressing left wing political views. One of Horne’s starring roles was in the 1943 movie “Stormy Weather” for which she also performed the title song.

27. Crow, at times, in Hinduism OMEN
In the Hindu tradition, crows are regarded as a carriers of information, omens. For example, when a crow makes a crowing sound in front of person’s house, this can be considered a sign that a special visitor will arrive.

29. Brand of beard trimmers WAHL
The Wahl Clipper Corporations is a company based in Sterling, Illinois that makes grooming clippers for both humans and animals.

36. CSA soldiers REBS
The Confederate States of America (CSA) set up government in 1861 just before Abraham Lincoln took office. Jefferson Davis was selected as President of the CSA at its formation and retained the post for the life of the government.

40. Broadway king’s domain SIAM
“Anna and the King of Siam” is a semi-biographical novel written by Margaret Landon and first published in 1944. The book tells the largely true story of Anna Leonowens who spent five years in Siam teaching English to the children and wives of King Mongkut. The novel was adapted as a 1946 movie of the same name starring Irene Dunne and Rex Harrison. Then followed a 1951 stage musical titled “The King and I”. The musical was written as a vehicle for Gertrude Lawrence, who played Anna. Rex Harrison was asked to play the King, but he turned it down and Yul Brynner was cast instead. A movie version of the stage musical was released in 1956, famously starring Yul Brynner and Deborah Kerr.

42. Nina of “The Ten Commandments” FOCH
Nina Foch was a Dutch-American actress who appeared in many Hollywood movies in the forties and fifties. Foch’s first husband was James Lipton, the host of Bravo’s “Inside the Actors Studio”.

“The Ten Commandments” is an epic movie directed by Cecil B. DeMille, and released in 1956. The cast is as epic as the film, with Charlton Heston playing the lead role of Moses. Also appearing are Yul Brynner as Rameses, Edward G. Robinson as Dathan, Vincent Price as Baka and Anne Baxter as Nefretiri.

54. Blue shade AZURE
The word “azure” came into English from Persian via Old French. The French word “l’azur” was taken from the Persian name for a place in northeastern Afghanistan called “Lazhward” which was the main source of the semi-precious stone lapis lazuli. The stone has a vivid blue color, and “azure” has been describing this color since the 14th century.

56. Result of glacial calving BERG
An iceberg is a large piece of freshwater ice that is floating freely after having broken off from a glacier or ice shelf. Out use of “iceberg” comes from the Dutch word for the same phenomenon “ijsberg”, which translates literally as “ice mountain”.