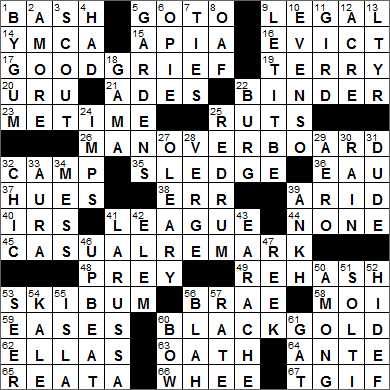 Today’s Wiki-est, Amazonian Googlies
Across
9. Paper size LEGAL
Our paper sizes here in the US don’t conform with the standards in the rest of the world. ISO standard sizes used elsewhere have some logic behind them in that the ratio of width to length is usually one to the square root of two. This mathematical relationship means that when you cut a piece of paper in two each half preserves the aspect ratio of the original, which can be useful in making reduced or enlarged copies of documents. Our standard size of “letter” (8.5 x 11 inches) was determined in 1980 by the Reagan administration to be the official paper size for the US government. Prior to this, the “legal” size (8.5 x 14 inches) had been the standard, since 1921.

14. Village People song with arm motions YMCA
“YMCA” was released in 1978 by Village People and has been adopted as an anthem by the gay community. The song was written by Victor Willis, a straight member of the mostly gay band, and he clarifies that the lyrics are extolling the virtues of the “YMCA” as a source of recreation for black urban youth. I think he might have been winking when he said that …

15. Samoan capital APIA
Apia is the capital city, and in fact the only city, of the Pacific island-nation of Samoa. The harbor of Apia is famous for a very foolish incident in 1889 involving seven naval vessels from Germany, the US and Britain. A typhoon was approaching so the safest thing to do was to head for open water away from land, but no nation would move its ships for fear of losing face in front of the others. Six of the ships were lost in the typhoon as a result and 200 American and German sailors perished. The British cruiser HMS Calliope barely managed to escape from the harbor and rode out the storm safely.

Good Friday is a holiday observed by Christians that commemorates the crucifixion of Jesus Christ. Good Friday is part of Holy Week, which is the last week of Lent and which starts with Palm Sunday and ends with Holy Saturday. The term “Good Friday” might be a corruption of “God Friday”, but this etymology is contested.

19. Towel material TERRY
Terry cloth is a fabric designed to absorb lots of liquid. The fabric has relatively large loops of thread that improve the absorption properties. The larger the loop, the more thread, the better the absorption.

20. Arg. neighbor URU
The official name of Uruguay is the Oriental Republic of Uruguay, reflecting the nation’s location on the eastern coast of South America. It is a relatively small country, the second-smallest on the continent, after Suriname. In 2009, Uruguay became the first country in the world to provide a free laptop and Internet access to every child. Now there’s a thought …

26. Distress call at sea MAN OVERBOARD! (giving “Man Friday”)
In Daniel Defoe’s 1719 novel “Robinson Crusoe”, the castaway encounters a companion that Crusoe calls “Friday”, because the two first met on that day. Friday soon becomes his willing servant. This character is the source of our terms “Man Friday” and “Girl Friday”, which are used to describe a particularly competent and loyal assistant.

35. Two-handed hammer SLEDGE
A sledgehammer is a big hammer, used to apply a lot of force. The word “sledgehammer” comes from the Anglo Saxon “Slaegan” meaning “to strike violently”. “Slaegan” is also the root of the words “slag”, “slay” and “slog”.

36. __ Claire, Wisconsin EAU
Eau Claire, Wisconsin is named for the Eau Claire River, which in turn was named by French explorers. The explorers had been travelling down the muddy Chippewa River and diverted into the clear water of what is now called the Eau Claire River. They exclaimed “Voici l’eau claire!” meaning “Here is clear water!” The French phrase “Voici l’eau claire” is now the city’s motto that appears on the city seal.

39. Dry as the Mojave ARID
The Mojave Desert in the southwest is named after the Native American Mohave tribe. Famous locations within the boundaries of the desert, are Death Valley, Las Vegas, Nevada and the ghost town of Calico, California.

41. Maritime measure LEAGUE
A “league” is a unit of distance that dates back to the Middle Ages. No longer used, it was originally defined as the distance that a person could walk in an hour. In the English-speaking world, a league was equal to three miles on land, or three nautical miles at sea.

44. Zippo NONE
The use of the words “zip” and “zippo” to mean “nothing” dates back to the early 1900s when it was student slang for being graded zero on a test.

56. Slope overlooking a loch BRAE
“Brae” is a lowland Scots word for the slope or brow of a hill.

60. Oil metaphor BLACK GOLD (giving “Black Friday”)
In the world of retail, “Black Friday” is the day after Thanksgiving in the US. Black Friday is when many stores start the holiday shopping season, and so offer deep discounts to get ahead of the competition.

65. Rodeo rope REATA
“Reata” is the Spanish word for “lasso”. We tend to use the spelling “riata” in English, but sometimes can use the original Spanish word.

67. Pre-weekend shout … and a hint to the first word of 17-, 26-, 45- and 60-Across TGIF!
“Thank God It’s Friday” (TGIF) is a relatively new expression that apparently originated in Akron, Ohio. It was a catchphrase used first by disk jockey Jerry Healy of WAKR in the early seventies. That said, one blog reader wrote me to say that he had been using the phrase in the fifties.

Down
6. TV role for Ronny OPIE
Opie Taylor is the character played by Ron Howard on “The Andy Griffith Show”. Opie lives with widowed father Andy Taylor (played by Andy Griffith) and his great-aunt Beatrice “Aunt Bee” Taylor (played by Frances Bavier). Ron Howard first played the role in 1960 in the pilot show, when he was just 5 years old. Howard sure has come a long way since playing Opie Taylor. He has directed some fabulous movies including favorites of mine like “Apollo 13”, “A Beautiful Mind” and “The Da Vinci Code”.

9. Beatles title after “Speaking words of wisdom” LET IT BE
“Let It Be” was the last album that the Beatles released as an active group playing together. The title song “Let It Be” was written by Paul McCartney, and it is clearly one of his own favorites. McCartney says that he was inspired to write the song after having had a dream about his mother (who had died some years earlier from cancer). In fact he refers to her (Mary McCartney) in the line “Mother Mary comes to me”. Paul’s first wife, Linda, is singing backing vocals on the song, the only time she is known to have done so in a Beatles recording. 18 years after that 1970 recording was made, Paul, George and Ringo sang “Let It Be” at a memorial service for Linda, who was also lost to cancer. Sad stuff, but a lovely song …

11. Encircle with a belt GIRD
The phrase “gird your loins” dates back to Ancient Rome. The expression describes the action of lifting “one’s skirts” and tying them between the legs to allow more freedom of movement before going into battle. Nowadays, “gird your loins” is a metaphor for “prepare yourself for the worst”.

13. Space travel dist. LT YR
A light-year (lt. yr.) is a measure of distance, not time. It is the distance that light travels in a vacuum in one year. The accepted abbreviation for a light-year is “ly”. A light-second is a lot shorter distance: about 186,282 miles.

18. Explorer Vasco da __ GAMA
Vasco da Gama left on his first voyage of discovery in 1497. da Gama journeyed around the Cape of Good Hope, the southernmost tip of Africa, and across the Indian Ocean making landfall in India. Landing in India, his fleet became the first expedition to sail directly from Europe to the sub-continent. Vasco da Gama was well known for acts of cruelty, especially on local inhabitants. One of his milder atrocities was inflicted on a priest whom he labelled as a spy. He had the priest’s lips and ears cut off, and sent him on his way after having a pair of dog’s ears sewn onto his head.

22. Town BURG
“Burg” is an informal term used in the US for a smaller town, from the German word “burg” meaning a fortified city.

25. “The Shining” mantra REDRUM
In the 1980 movie “The Shining”, there is a young boy called Danny who has the gift of ESP and who has a bad feeling about the hotel where he and his family are to live. At one stage, Danny calls out the word “redrum” and then goes into a trance. “Redrum” is “murder” spelled backwards.

27. Chicago Fire Mrs. O’LEARY
The Great Chicago Fire blazed for almost three full days in October of 1871. By the time it was extinguished, hundreds of people had died and four square miles of the city had been destroyed. It is known that the fire started in or near a small barn owned by an Irish immigrant, a Mrs. Catherine O’Leary. A reporter called Michael Ahern wrote in the “Chicago Tribune” that the fire was ignited when a cow in the barn kicked over a lantern. Years later, Ahern admitted that he made up the story about the cow and the lantern, as he felt it made colorful copy. Supposedly Mrs. O’Leary died a heartbroken woman as she spent the rest of her life with the public blaming her on the tragic loss of life and property.

39. Pharaoh’s cross ANKH
The ankh was the ancient Egyptian hieroglyphic character for “eternal life”. The ankh wasn’t just used in inscriptions but was often fashioned into amulets and as surrounds for mirrors (perhaps symbolizing a view into another world). The ankh is also known as “the key of the Nile” and “crux ansata” (Latin for “cross with a handle”).

41. Hall of Fame manager Tony LA RUSSA
Tony La Russa is a former MLB player and manager. Off the field, La Russa is well known in this part of Northern California as the founder of the Animal Rescue Foundation (ARF) headquartered in the city of Walnut Creek. The ARF is a “no-kill” animal shelter for abandoned dogs and cats. We rescued our pet dog from the ARF.

51. Conductor Sir Georg SOLTI
Sir Georg Solti was a great Hungarian-British conductor, who spent 22 years as music director of the Chicago Symphony, one of many prestigious positions he held in the world of classical music and opera. Solti was awarded 31 Grammy Awards, the most won by any individual in any genre of music.

61. Thug’s gun GAT
“Gat” is slang for “gun”. The term is derived from the Gatling gun, the precursor to the modern machine gun. The Gatling gun was invented by Dr. Richard J. Gatling in 1861. Apparently he was inspired to invent it so that one man could do as much damage as a hundred, thereby reducing the size of armies and diminishing the suffering caused by war. Go figure …