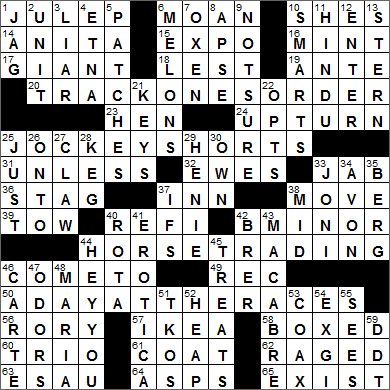 CROSSWORD SETTER: Gail Grabowski & Bruce Venzke
THEME: A Day at the Races … today’s themed answers all start with something one might see enjoying A DAY AT THE RACES

20A. Keep tabs on a shipment TRACK ONE’S ORDER
25A. Some briefs JOCKEY SHORTS
44A. Shrewd bargaining HORSE TRADING

Today’s Wiki-est, Amazonian Googlies
Across
14. Soul singer Baker ANITA
Anita Baker is an R&B and soul singer who was raised in Detroit, Michigan. Baker’s most successful song is the Grammy-winning “Sweet Love” released in 1986.

16. With 1-Across, Kentucky Derby drink MINT
(1A. See 16-Across JULEP)
The mint julep is a bourbon-based cocktail that is associated with the American South, and with the Kentucky Derby in particular. Although the Mint Julep mixed drink has probably only been around a couple of hundred years or so, the term “julep” dates back to the 14th century, when it described a syrupy drink in which medicine was administered. The term came into English from Old French, but ultimately derives from the Persian “golâb”. If you’d like to make yourself a mint julep, one recipe is:

18. “__ we forget” LEST
“Lest we forget” is an oft-quoted phrase, one that comes from a poem by Rudyard Kipling called “Recessional”. Kipling wrote the piece on the occasion of the Diamond Jubilee of Queen Victoria in 1897 and used it to express sadness at the waning of the British Empire. The phrase “lest we forget” is used in this context, a warning that the empire will decline. Ever since WWI we’ve been using the words on memorials as a plea not forget the sacrifices made by others in the past.

19. Hold ’em fee ANTE
The official birthplace of the incredibly popular poker game of Texas Hold ‘Em is Robstown, Texas where the game dates back to the early 1900s. The game was introduced into Las Vegas in 1967 by a group of Texan enthusiasts including Doyle Brunson, a champion often seen playing on TV today. Doyle Brunson published a poker strategy guide in 1978, and this really helped increase the popularity of the game. But it was the inclusion of Texas Hold ‘Em in the television lineup that really gave the game its explosive surge in popularity, with the size of the prize money just skyrocketing.

25. Some briefs JOCKEY SHORTS
Jockey was the company that invented the Y-Front brief, in 1934.

40. Mortgage change, briefly REFI
Our word “mortgage” comes from the Old French “mort gaige” which translated as “dead pledge”. The idea was that a pledge to repay a loan dies when the debt is cleared.

42. Bach’s “Mass in __” B MINOR
Perhaps the most famous mass in classical music is J. S. Bach’s “Mass in B minor”, fittingly completed just before he died. It was one of the last of Bach’s compositions, although much of the music was composed earlier in his life.

50. 1937 Marx Brothers film … and, based on words that begin 20-, 25- and 44-Across, this puzzle’s title A DAY AT THE RACES
“A Day at the Races” is a 1937 Marx Brothers film, a big hit for them. Groucho Marx played a madcap Dr. Hackenbush, although the original script called for the name to be “Quackenbush”. That had to be changed due to fears of a lawsuit from a real Dr. Quackenbush.

56. Golf standout McIlroy RORY
Rory McIlroy is an incredibly successful golfer from Northern Ireland. McIlroy is a relatively young man and the current world number one on the circuit, so folks can’t help but compare him to Tiger Woods. He is first European to win three different majors. Along with Jack Nicklaus and Tiger Woods, McIlroy is one of the only three people to win three majors before the age of 25.

57. Furniture chain that sells Swedish meatballs IKEA
Every IKEA store features a restaurant that serves traditional Swedish food, including Swedish meatballs and lingonberry jam. Each store also has a Swedish Food Market where customers can purchase specialty foods from Sweden.

62. Went berserk RAGED
Our word “berserk” meaning “deranged” comes from the “Berserkers”, Norse warriors described in Old Norse literature. Berserkers were renowned for going into battle in a fury, and some believe that they consumed drugged food to get themselves worked up for the fighting ahead.

63. Isaac’s older son ESAU
Esau, was the grandson of Abraham and the twin brother of Jacob, the founder of the Israelites. When Esau was born to Isaac and Rebekah, the event was described, “Now the first came forth, red all over like a hairy garment”. Esau is portrayed later in life as being very different from his brother, as a hunter and someone who loves the outdoor life.

64. Once-sacred snakes ASPS
The venomous snake called an asp was a symbol of royalty in Ancient Egypt.

Down
1. Car with a cat logo, briefly JAG
Jaguar started out as a manufacturer of sidecars for motorcycles back in 1922, when the company was known as the Swallow Sidecar Company (SS for short). The company changed its name to Jaguar after WWII, because of the unfortunate connotations of the letters “SS” in that era (i.e. the Nazi paramilitary organization).

4. Sicilian volcano ETNA
Mt. Etna is the largest of three active volcanoes in Italy. Mt Etna is about 2 1/2 times the height of its equally famous sister, Mt. Vesuvius. Etna is home to a 110-km long narrow-guage railway, and two ski resorts.

7. Yoked team OXEN
A yoke is a wooden beam used between a pair of oxen so that they are forced to work together.

8. Vaulted church recess APSE
The apse of a church or cathedral is a semicircular recess in an outer wall, usually with a half-dome as a roof and often where there resides an altar. Originally apses were used as burial places for the clergy and also for storage of important relics.

29. ’20s-’30s skating gold medalist Sonja HENIE
Sonja Henie was a World and Olympic Champion figure skater from Norway from the days when “amateur” sports stars were not paid. Henie made up for her lack of income from competing by developing a career in Hollywood. She was one of highest-paid film stars at the height of her movie career.

30. Part of BYOB OWN
Bring Your Own Beer/Bottle/Booze (BYOB)

33. “Both Sides Now” singer Mitchell JONI
Joni Mitchell is a Canadian singer and songwriter from Fort MacLeod in Alberta. Mitchell is perhaps best known for her recordings “Big Yellow Taxi” and “Woodstock”.

“Both Sides Now” is a very successful song written by Joni Mitchell, most famously recorded by Judy Collins. It has been recorded many, many times by many different artists, including Leonard Nimoy would you believe?

34. Door-to-door cosmetics seller AVON
In 1886, a young man called David McConnell was selling books door-to-door. To enhance his sales numbers he was giving out free perfume to the ladies of the houses that he visited. Seeing as his perfume was more popular than his books, he founded the California Perfume Company in New York City and started manufacturing and selling across the country. The company name was changed to Avon in 1939, and the famous “Avon Calling” marketing campaign was launched in 1954.

35. Arctic hazard BERG
An iceberg is a large piece of freshwater ice that is floating freely after having broken off from a glacier or ice shelf. Out use of “iceberg” comes from the Dutch word for the same phenomenon “ijsberg”, which translates literally as “ice mountain”.

40. Membership list ROTA
“Rota”, meaning a roster of names, isn’t a word I hear much in the US, but we used it all the time back in Ireland.

42. Fictional fox’s title BR’ER
Br’er Rabbit and Br’er Fox are characters in the Uncle Remus stories, written by Joel Chandler Harris. The Uncle Remus stories are adaptations of African American folktales that Harris collected across the Southern States. “Br’er” is an abbreviated form of “brother”.

48. “West Side Story” love song MARIA
Leonard Bernstein’s musical “West Side Story” is based on William Shakespeare’s “Romeo and Juliet”. The musical is set in New York City and features two rival gangs: the Sharks from Puerto Rico and the Jets with working-class, Caucasian roots. Tony from the Jets (played by Richard Beymer) falls in love with Maria (played by Natalie Wood) from the Sharks. All this parallels Romeo from the House of Montague falling for Juliet from the House of Capulet in the Italian city of Verona.

51. Boxer’s stats TKOS
In boxing, a knockout (KO) is when one of the fighters can’t get up from the canvas within a specified time, usually 10 seconds. This can be due to fatigue, injury, or the participant may be truly “knocked out”. A referee, fighter or doctor may also decide to stop a fight without a physical knockout, especially if there is concern about a fighter’s safety. In this case the bout is said to end with a technical knockout (TKO).

54. Former soldier, briefly EX-GI
The initials “G.I.” stand for “Government Issue” and not “General Infantry” as is often believed. GI was first used in the military to denote equipment made from Galvanized Iron and during WWI, incoming German shells were nicknamed “GI cans”. Soon after, the term GI came to be associated with “Government Issue” and eventually became an adjective to describe anything associated with the Army.

59. Outlawed pesticide DDT
DDT is dichlorodiphenyltrichloroethane (don’t forget now!). DDT was used with great success to control disease-carrying insects during WWII, and when made available for use after the war it became by far the most popular pesticide. And then Rachel Carson published her famous book “Silent Spring”, suggesting there was a link between DDT and diminishing populations of certain wildlife. It was the public outcry sparked by the book, and reports of links between DDT and cancer, that led to the ban on the use of the chemical in 1972. That ban is touted as the main reason that the bald eagle was rescued from near extinction.