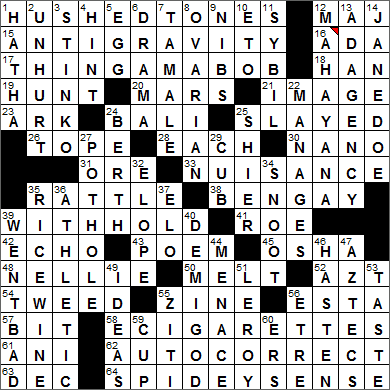 Today’s Wiki-est, Amazonian Googlies
Across
16. Lovelace whom many consider the first computer programmer ADA
Ada Lovelace’s real name was Augusta Ada King, Countess of Lovelace. She was the only legitimate child of Lord Byron, the poet. Lovelace was fascinated by mathematics and wrote about the work done by Charles Babbage in building his groundbreaking mechanical computer. In some of her notes, she proposed an algorithm for Babbage’s machine to compute Bernoulli numbers. This algorithm is recognized by many as the world’s first computer program and so Lovelace is sometimes called the first “computer programmer”. There is a computer language called “Ada” that was named in her honor. The Ada language was developed from 1977 to 1983 for the US Department of Defense.

18. Solo on-screen HAN
Han Solo is the space smuggler in “Star Wars” played by Harrison Ford. Ford was originally hired by George Lucas just to read lines for actors during auditions for “Star Wars”, but over time Lucas became convinced that Ford was right for the pivotal role of Han Solo.

20. Milky Way source MARS
Having lived on both sides of the Atlantic, I find the Mars Bar to be the most perplexing of candies! The original Mars Bar is a British confection (and delicious) first manufactured in 1932. The US version of the original Mars Bar is called a Milky Way. But there is candy bar called a Milky Way that is also produced in the UK, and it is completely different to its US cousin, being more like an American “3 Musketeers”. And then there is an American confection called a Mars Bar, something different again. No wonder I gave up eating candy bars …

23. Tablet container ARK
According to the Book of Exodus, the stone tablets on which the Ten Commandments are inscribed were placed in a chest called the Ark of the Covenant. The Ark was built according to instructions given by God to Moses on Mount Sinai.

24. Coral Triangle tourist destination BALI
The geographic term “Coral Triangle” refers to a large marine area in the western Pacific Ocean. Included in the region are the waters of Indonesia, Malaysia, the Philippines, Papua New Guinea, Timor Leste and the Solomon Islands.

26. Down a lot TOPE
“To tope” is to drink alcohol excessively and habitually.

30. Robot starter NANO-
Nanorobots (also “nanobots”) are tiny devices that range from 0.1 to 10 micrometers in size. The technology of nanorobotics is in its infancy, but it is hoped that nanobots might be used (for example) in medicine one day. The oft-cited application is the use of nanobots inserted inside the body to identify and destroy cancer cells.

38. Icy Hot competitor BENGAY
Bengay is sold as a painkilling heat rub, to relieve aching muscles. It was developed in France by a Dr. Jules Bengue (hence the name) and was first sold in America way back in 1898.

Icy Hot is a topical heat rub that is used to relieve muscular discomfort and pain from arthritis and rheumatism. The active ingredient doesn’t provide any heat or cold, but it does stimulate nerve receptors in the skin causing the user to experience a cool sensation followed by warmth.

41. Sushi bar delicacy ROE
Sushi is a Japanese dish that has as its primary ingredient cooked, vinegared rice. The rice is usually topped with something, most often fish, and can be served in seaweed rolls. If you want raw fish by itself, then you have to order “sashimi”.

43. Slam offering POEM
A poetry slam is a competition in which poets read their own work (usually), with winners being chosen by members of audience. Apparently the first poetry slam took place in Chicago in 1984. Now there is a Nation Poetry Slam that takes place each year, with representatives from the US, Canada and France.

45. Org. that monitors plants OSHA
The Occupational Safety and Health Administration (OSHA) was created in 1970 during the Nixon administration. OSHA regulates workplaces in the private sector and regulates just one government agency, namely the US Postal Service.

48. Nervous person? NELLIE
A nervous Nellie is someone easily upset and hesitant to act. The term comes from “Old Nell”, a name often used for a nag. “Nervous Nellie” was originally used to describe a highly-strung racehorse.

52. AIDS-fighting drug AZT
AZT is the abbreviated name for the drug azidothymidine, much used in the treatment of HIV/AIDS. AZT was originally developed in the seventies as a potential treatment for retroviruses (cancer-causing viruses), although it was never approved for use in treatment. In 1984, it was confirmed that AIDS was caused by the human immunodeficiency virus (HIV), so scientists turned to known antiviral drugs in the search for a viable treatment. Burroughs-Wellcome came up with a treatment regime using AZT, and filed a patent in 1985. The patent was challenged in court but the patent expired anyway in 2005 without any decision being made. There are now at least four generic forms of AZT approved for sale in the US.

54. Rough stuff TWEED
Tweed is a rough woolen fabric very much associated with Scotland in the UK, and County Donegal in Ireland. The cloth was originally called “tweel”, the Scots word for “twill”. Apparently a London merchant misinterpreted some handwriting in the early 1800s and assumed the fabric was called “tweed”, a reference to the Scottish River Tweed, and the name stuck …

55. Low-cost pub ZINE
Fanboys (and fangirls) are fans, but fans of a very specific subject in a particular field. So, someone might be a fan of home computing, but an Intel fanboy would have an enthusiasm for CPUs made by Intel. A fanzine (also “zine”) is a fan publication with a very limited circulation, dealing with a very specific subject matter. Fanzines are usually desktop published and distributed electronically or as photocopies.

58. Vaping devices E-CIGARETTES
An electronic cigarette (also called an “e-cigarette”) is a battery-powered device that resembles a real cigarette. The e-cigarette vaporizes a solution that contains nicotine, forming a vapor that resembles smoke. The vapor is inhaled, delivering the nicotine into the body. The assumption is that an e-cigarette is healthier than a regular cigarette as the inhaled vapor is less harmful than inhaled smoke. But, that may not be so …

63. Mo. for which tanzanite is a birthstone DEC
Here is the “official” list of birthstones by month, that we tend to use today:

64. Comics-derived danger alert SPIDEY SENSE
“Spidey sense” is a phrase used to describe one’s intuition or instinct, especially when sensing something that might be dangerous. The term arises from the comic book hero Spider-Man’s ability to sense danger before others.

Down
1. Yoga variety HATHA
Hatha yoga is a yoga system developed in 15th century India. Traditional Hatha yoga is a more “complete” practice than often encountered in the west, involving not just exercise but also meditation and relaxation.

6. Certain queen’s domain DRAMA
That would a “drama queen” …

7. Steamed cantina food TAMALE
A tamale is a traditional dish from Central America composed of a starchy dough that is steamed or boiled in a wrapper made from a corn husk or banana leaf. The dough is called masa, and can include many different ingredients including meat, cheese fruit and vegetables.

9. Ink deliverers NIBS
“Nib” is a Scottish variant of the Old English word “neb”, with both meaning the beak of a bird. This usage of “nib” as a beak dates back to the 14th century, with “nib” meaning the tip of a pen or quill coming a little later, in the early 1600s.

11. Basil’s wife on “Fawlty Towers” SYBIL
“Fawlty Towers” might just be the world’s greatest sitcom, popular on both sides of the Atlantic. It was written by, and starred, John Cleese and his then-wife Connie Booth. There were two series, one broadcast in 1975, and the other in 1979. There have been three attempts to remake the series in the US, one of which starred John Larroquette as Basil Fawlty, but none of the remakes worked at all.

14. Mystery woman JANE DOE
Although the English court system does not use the term today, “John Doe” first appeared as the “name of a person unknown” in England in 1659, along with another unknown, Richard Roe. The female equivalent of John Doe is Jane Doe, with the equivalent to Richard Roe being Jane Roe (as in Roe v. Wade, for example).

24. Where an engineer may retire BERTH
An engineer on a train or a ship might retire to a berth for a nap or a good night’s sleep.

27. Artery problem POTHOLE
A main road can be described as an “artery”.

34. Arrogant sort SNOOT
“Snoot” is a variant of “snout” and is a word that originated in Scotland. The idea is that someone who is “snooty”, or snouty, tends to look down his or her nose at the rest of the world.

36. Team member in “Moneyball” ATHLETIC
Michael Lewis wrote his book “Moneyball” about the way Billy Beane built up the Oakland Athletics baseball team by bringing on board players who were “undervalued”, getting the maximum benefit from his limited payroll budget. I must admit I know nothing about baseball, but I thoroughly enjoyed reading “Moneyball”, as well as the film adaptation with Brad Pitt playing Beane.

37. “Eldorado” group ELO
ELO of course stands for the Electric Light Orchestra, a symphonic rock group from the north of England. ELO’s manager was Don Arden, father of Sharon Osbourne (wife of Ozzy).

40. Part-human mythological creature DEMIGOD
In Greek mythology, a demigod was a half-god, the offspring of one parent who was a god and one parent who was human. The list of demigods includes the Greek Heracles and the Celtic hero Cú Chulainn.

47. Ancient cacao bean traders AZTECS
The flowers of the cacao tree grow in clusters directly on the trunk, and on older branches. The pollinated flowers turn into ovoid cacao pods, each of which contain 20-60 seeds or beans. The seeds are used as the main ingredient in chocolate.

49. TED talk subjects IDEAS
The acronym TED stands for Technology Entertainment and Design. TED is a set of conferences held around the world by a non-profit group called the Sapling Foundation. The conference subjects are varied, and the meetings are often led by big names such as Bill Clinton, Al Gore, Bill Gates and Jane Goodall. The Sapling Foundation then makes recordings of the conferences available for free online with the intent of disseminating the ideas globally. These conferences are known as “TED Talks”.

55. Italian tubes ZITI
Tubular pasta is known in general as “penne”, and there are many variants. For example, ziti is a particularly large and long tube with square-cut ends. “Penne” is the plural of “penna”, the Italian for “feather, quill”.