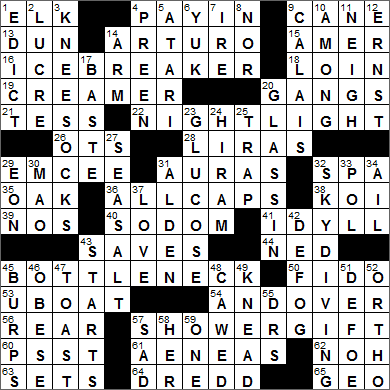 CROSSWORD SETTER: Jennifer Nutt
THEME: All Caps … each of today’s themed answers starts with a type of cap:

36A. Emphatic type … or what the beginnings of the longest entries are? ALL CAPS

Today’s Wiki-est, Amazonian Googlies
Across
1. Fraternal order member ELK
The Benevolent and Protective Order of Elks (BPOE) was founded in 1868, and is a social club that has about a million members today. It started out as a group of men getting together in a “club” in order to get around the legal opening hours of taverns in New York City. The club took on a new role as it started to look out for poor families of members who passed away. The club now accepts African Americans as members (since the seventies) and women (since the nineties), but atheists still aren’t welcome.

9. Candy shape CANE
Apparently candy canes were created at the behest of the choirmaster at Cologne Cathedral in Germany in 1672. The sweet sticks were basically used as bribes to keep children quiet during services. The choirmaster specified that the candy sticks should have a crook at the top so that they reminded the children of the three shepherds who visited the infant Jesus just after his birth.

13. Pressure for payment DUN
“To dun” is to insist on payment of a debt. The etymology of the term is unclear, with one suggestion that it dates back to a famous debt collector in London named Joe Dun.

14. He became New York Philharmonic music director 30 years before Leonard ARTURO
Arturo Toscanini was an Italian conductor of classical music. Toscanini took up the baton for the first time under sensational circumstances in 1886. He was attending a performance of “Aida” in Rio de Janeiro in the role of assistant chorus master, on a night when a substitute conductor was leading the orchestra. The substitute was in charge because the lead conductor had been forced to step down by striking performers who would not work with him. The disgruntled lead conductor led the audience in booing the unfortunate substitute, forcing him off the stage. Yet another substitute attempted to lead the performance, but he could not overcome the hostility of the crowd. The musicians themselves begged Toscanini to take up the baton, for the first time in his life, and simply because he knew the score by heart. After over an hour of mayhem, Toscanini led the company in a remarkable performance to marvelous acclaim. He had just launched his conducting career.

The composer and conductor Leonard Bernstein was a man who made great strides in bringing classical music to the masses. He gave numerous lectures on the subject on television. Indeed, one of my favorite recordings of the instructive “Peter and the Wolf” by Prokofiev, is conducted and narrated by Bernstein.

15. Part of ABC: Abbr. AMER
The American Broadcasting Company (ABC) is the world’s largest broadcaster in terms of revenues. ABC was formed in 1943, created out of the former NBC Blue radio network.

21. Durbeyfield daughter TESS
In Thomas Hardy’s novel, the heroine and title character is Tess Durbeyfield. Her father is an uneducated peasant and when he hears that his name is a corruption of the noble name of “D’Urberville”, the news goes to his head.

28. Turkish money LIRAS
The currency of Turkey is the Turkish lira, which is divided into 100 kuruş.

29. Host EMCEE
The term “emcee” comes from “MC”, an initialism standing for Master or Mistress of Ceremonies.

31. Holistic healers’ observations AURAS
A holistic approach to medicine emphasises not only physical symptoms but also social considerations and the environment.

35. Winery wood OAK
Wines that are aged in oak are said to exhibit the flavors of vanilla, butter, coconut and dill.

38. Colorful carp KOI
Koi are also called Japanese carp. Koi have been bred for decorative purposes and there are now some very brightly colored examples found in Japanese water gardens.

40. What Lot’s wife looked back at SODOM
The two cities of Sodom and Gomorrah, as well as Admah and Zeboim, were destroyed by God for the sins of their inhabitants, according to the Bible. The name Sodom has become a metaphor for vice and homosexuality, and gives us our word “sodomy”.

Lot was a nephew of Abraham, with his story appearing in the Book of Genesis. At one point Lot had to flee the doomed city of Sodom with his wife. God gave instructions that the couple should not look back as they left the city, but Lot’s wife disobeyed and she was turned into a pillar of salt.

41. Pastoral poem IDYLL
An “idyll” (also “idyl”) is a short poem with a pastoral theme, usually depicting the scene in romantic and idealized terms. The word comes from the Greek “eidyllion”, which literally translates to “little picture” but was a word describing a short, poem with a rustic theme.

44. Nancy Drew’s beau NED
I loved the Nancy Drew mysteries as a kid (I know, as a boy I “shouldn’t” have been reading girls’ books!). The Nancy Drew stories were written by a number of ghost writers, although the character was introduced by Edward Stratemeyer in 1930. Nancy Drew’s boyfriend was Ned Nickerson, a college student from Emerson.

53. WWII attacker U-BOAT
“U-boat” stands for the German “Unterseeboot” (undersea boat). Notably, a U-boat sank the RMS Lusitania in 1915, an event that helped propel the US into WWI.

56. Fanny REAR
“Fanny” is a slang term for the buttocks, rump. One has to be careful using the slang term “fanny” if traveling in the British Isles, because over there it has a much ruder meaning …

61. Trojan hero AENEAS
In Roman and Greek mythology, Aeneas was a Trojan warrior. According to ancient Roman lore, Aeneas traveled to Italy and became the ancestor Romulus and Remus, and thus the ancestor of all Romans. Aeneas’s story is told in Virgil’s epic poem “The Aeneid”.

62. Japanese drama NOH
Noh is a form of musical drama in Japan that has been around since the 14th century. Many of the Noh performers are masked, allowing all the roles to be played by men, both male and female parts.

65. Prefix with caching GEO-
Geocaching is a game rather like “hide and seek” that is played outdoors using hi-tech equipment. The idea is that someone places a waterproof container in a specific location with known GPS coordinates. The container has a logbook inside, so that players who find the “cache” can record their discovery along with any notes of interest. The location of the container is listed on special sites on the Internet for anyone to access. You can check out caches near you at www.geocaching.com. You will probably be surprised at how many there are! I know I was …

Down
2. Riches LUCRE
Our word “lucre” meaning “money, profits” comes from the Latin “lucrum” that means the same thing.

5. Jaguar creator ATARI
The Atari Jaguar was a video game console introduced in 1993 and discontinued in 1996.

8. Postal motto word NOR
There is no official creed or motto for the US Postal Service. However, there is the oft-quoted inscription that is posted (pun!) over the entrance to the James Farley Post Office in New York City:
Neither snow nor rain nor heat nor gloom of night stays these couriers from the swift completion of their appointed rounds.

9. French town closest to England CALAIS
Calais is a major ferry port in northern France that overlooks the Strait of Dover, which is the narrowest point in the English Channel. The strait is just over 20 miles wide, making Calais the nearest French town to England.

12. Surrealist Max ERNST
Max Ernst was a painter and sculptor, a pioneer in the Dada movement and Surrealism. Ernst was born near Cologne in Germany in 1891 and he was called up to fight in WWI, as were most young German men at that time. In his autobiography he writes “Max Ernst died the 1st of August, 1914” a statement about his experiences in the war. In reality, Ernst died in 1976 having lived to the ripe old age of 85.

23. Sugary stuff GLUCOSE
Glucose is a simple sugar that is also known as dextrose or grape sugar. It is widely found in nature as glucose is made by plants from carbon dioxide and water during photosynthesis.

30. “Little Red Book” author MAO
During China’s Cultural Revolution, the Communist Party published a book of statements and writings from Chairman Mao Zedong. Here in the West the publication was usually referred to as “The Little Red Book”.

31. Mayflower Compact signer ALDEN
John Alden is said to have been the first person to disembark from the Mayflower and to have set foot on Plymouth Rock in 1620. Alden himself was not a Pilgrim as such, and was a carpenter working on the Mayflower before it sailed. He apparently decided to travel with the ship at the last minute, perhaps in pursuit of the passenger who would become his wife, Priscilla Mullens. Alden ended up in a love triangle with Priscilla and Captain Miles Standish, a relationship which is recounted in the Longfellow poem “The Courtship of Miles Standish”. John and Priscilla were the parents of a son, John Alden, who was later to be accused during the Salem witch trials.

The pilgrims aboard the Mayflower were bound for the Colony of Virginia, but famously landed at the hook of Cape Cod when bad weather forced the ship to the north. The passengers decided to make their new home in what is now Massachusetts. As the new colonists would not now fall under the laws of the Colony of Virginia, a majority of adult males formulated and signed an agreement that defined basic rules of governance that would used once the passengers disembarked the ship. The agreement came to be known as the Mayflower Compact.

51. Crusoe creator DEFOE
Daniel Defoe is most famous today as an author, of the novel “Robinson Crusoe” in particular. Defoe was also a trader, and a spy for King William III.