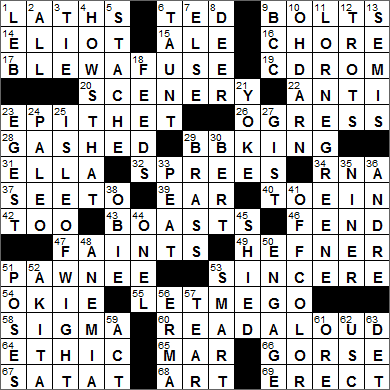 CROSSWORD SETTER: C.C. Burnikel
THEME: Off-Color … each of today’s themed answers contains a COLOR that’s a bit OFF, i.e. a word that just sounds like a COLOR:

41D. Risqué … and what each answer to a starred clue contains? OFF-COLOR

Today’s Wiki-est, Amazonian Googlies
Across
1. Trellis pieces LATHS
The words “lath” and “lattice” have the same root in Old French. Laths are thin strips of wood that are nailed across a frame forming a backing to which plaster can be applied to finish a wall. The term is also used for the main elements in a trellis, or the lengths of wood in a roof to which shingles are nailed.

6. “Ideas worth spreading” acronym TED
The acronym TED stands for Technology Entertainment and Design. TED is a set of conferences held around the world by a non-profit group called the Sapling Foundation. The conference subjects are varied, and the meetings are often led by big names such as Bill Clinton, Al Gore, Bill Gates and Jane Goodall. The Sapling Foundation then makes recordings of the conferences available for free online with the intent of disseminating the ideas globally. These conferences are known as “TED Talks”.

14. Eponym of a United Kingdom poetry prize ELIOT
The TS Eliot Prize for Poetry has been awarded annually since 1993 by the UK’s Poetry Book Society. The recipient is deemed to have produced the best collection of new verse in English in the UK or Ireland that year. The prize money comes from an endowment provided by Valerie Eliot, wife of poet TS Eliot.

19. Storage place CD-ROM
CD-ROM stands for “compact disc read only memory”. The name indicates that you can read information from the disc (like a standard music CD for example), but you cannot write to it. You can also buy a CD-RW, which stands for “compact disc – rewritable”, with which you can read data and also write over it multiple times using a suitable CD drive.

23. Man’s best friend, e.g. EPITHET
An “epithet” is a word or phrase, often used in a name, to describe a quality of the person or thing bearing that name. For example, King Richard I was also known by the epithet “Richard the Lionheart”.

26. Fiona, after Shrek’s kiss OGRESS
Before “Shrek” was a successful movie franchise and Broadway musical, it was a children’s picture book called “Shrek!” authored and illustrated by William Steig. The title “Shrek!” came from the German/Yiddish word Schreck, meaning “fear” or “terror”.

29. “Blues on the Bayou” musician BB KING
B.B. King was the stage name of Riley B. King, the celebrated blues guitarist and singer-songwriter. Referred to as the King of the Blues, King truly was a dedicated performer. He was doing gigs for over 50 years, and made over 15,000 appearances on stage. King’s first hit was “3 O’Clock Blues”, recorded in 1952. He passed away in May of 2015.

31. Spanish pronoun ELLA
“Ella” is the Spanish word for “she”.

39. Mr. Potato Head piece EAR
Mr. Potato Head is an enduring popular toy that has been around since its invention by George Lerner in 1949. In its original form, the toy was a collection of eyes, ears, and other facial features, that were designed to be stuck into a real potato. Mr. Potato Head also has the distinction of being the first toy ever to be advertised on television.

40. Front-wheel alignment TOE-IN
The wheels at the front-end of a car, if excessively toed in or toed out, need to be realigned.

49. “The Girls Next Door” co-creator HEFNER
Hugh Hefner (often called “Hef”) is from Chicago. His first publishing job was in the military, where he worked as a writer for a US Army newspaper from 1944-46. He went to college after his military service and then worked as a copywriter for “Esquire” magazine. He left “Esquire” to found his own publication that he called “Playboy”, which first hit the newsstands in 1953. “Playboy” has been around ever since.

“The Girls Next Door” is a reality TV show that aired from 2005 to 2010. It follows Hugh Hefner’s girlfriends who live with him at the Playboy Mansion.

54. Dust Bowl migrant OKIE
“Okies” was a derogatory term used during the Dust Bowl of the 1930s for farming families who migrated from Oklahoma (hence the name), Arkansas, Kansas and Texas in search of agricultural jobs in California. The road used by many of these migrant families was Route 66, which is also called “Mother Road”.

The Dust Bowl was the name given to a period in which severe dust storms ravaged the American and Canadian Prairies in the thirties. A major factor in the storms was the loss of the deep-rooted grasses native to the land that had been displaced by intensive farming. Without the grasses, the topsoil was blown away in a period of drought.

58. Summation symbol, in math SIGMA
Sigma is the eighteenth letter of the Greek alphabet, and is the one used for an “ess” sound, equivalent to our letter S. Sigma is used in mathematics to represent a summation, the adding together of a sequence of numbers.

66. Thorny evergreen GORSE
Gorse can be a lovely plant to view, largely because of its showy yellow flower. However, gorse took over my front yard so I was glad to see the back of it when I relandscaped recently, going instead with a drought-tolerant design.

Down
1. Its natl. emblem is the cedar tree LEB
The Lebanese flag has two red stripes, one at the top and one at the bottom, designed to symbolize the blood that was shed in the cause of the country’s liberation. Between each red stripe is a white background that represents peace as well as the snow on the Lebanese mountains. In the center of the flag is a green cedar tree, a reference to the cedars of Lebanon that are mentioned several times in the Bible.

5. What one might have with milk, briefly? ‘STACHE
A milk mustache (‘stache) is a sure indicator that a person has drunk some milk.

9. Email option, for short BCC
A blind carbon copy (bcc) is a copy of a document or message that is sent to someone without other recipients of the message knowing about that extra copy.

11. *”Bonanza” star LORNE GREENE (“Greene” sounds like “green”)
Lorne Greene was a Canadian actor, best known for playing the patriarch Ben Cartwright on the TV show “Bonanza”. Greene also had a number-one hit with the spoken-word ballad “Ringo” released in 1964.

The western TV series “Bonanza” ran for 14 seasons, making it the second longest running western show on television (after “Gunsmoke”, which ran for 20 seasons). “Bonanza” is set in the area around Virginia City in Nevada, close to Lake Tahoe.

21. Team connection YOKE
A yoke is a wooden beam used between a pair of oxen so that they are forced to work together.

24. Retro diet, to put it mildly PALEO
The paleolithic or caveman diet is a fad diet that became popular in the 2000s. The idea is to eat wild plants and animals that would have been available to humans during the Paleolithic era (roughly the Stone Age). This period precedes the introduction of agriculture and domestication of animals. As a result, someone on the diet avoids consuming grains, legumes, dairy and processed foods. The diet consists mainly of lean meat (about 45-65% of the total calorie intake), non-starchy vegetables, fruits, berries and nuts.

25. *Cottage site in the Beatles’ “When I’m Sixty-Four” ISLE OF WIGHT (“Wight” sounds like “white”)
The Isle of Wight is the largest island in England, and lies about five miles off the south coast of the country.

“When I’m Sixty-Four” is a 1967 Beatles song composed by Paul McCartney. McCartney may have been looking forward to “when he’s sixty-four”, but he wrote the song when he was only 16 years old.

30. Hall of Fame pitcher Blyleven BERT
Bert Blyleven is a former baseball pitcher known for his curveball. Blyleven now works as the color commentator for the Minnesota Twins.

35. Bay Area pro NINER
The very successful National Football League team in San Francisco takes its name from the gold prospectors who flooded into Northern California around 1949 during the California Gold Rush, the “49ers”.

The California gold rush actually started in 1848. The first to exploit the find were those people already in California. By 1849 the word had spread and gold-seekers started to arrive from all over the world. The “out-of-towners” who arrived in 1849 became known as forty-niners.

36. Court rival of Pete ANDRE
Renowned tennis professional Andre Agassi was nicknamed “the Punisher”, because of the efficiency with which he ran most of his opponents around the court. He wrote an autobiography called “Open”, published in 2009. An amazing revelation in the book is that Agassi’s famous head of hair was actually a wig for much of his playing career. Can you imagine how hard it must have been to play tennis at his level with a rug stuck on?

41. Risqué … and what each answer to a starred clue contains? OFF-COLOR
“Risqué” is a French word, the past participle of the verb “to risk”. So in English we use “risqué” to mean “racy”, but in French it means “risky”.

44. Law school newbie ONE L
“One L” is a name used in general for first year law students.

48. Lack of get-up-and-go ANEMIA
The term “anemia” (or “anaemia” as we write it back in Ireland) comes from a Greek word meaning “lack of blood”. Anemia is a lack of iron in the blood, or a low red blood cell count. Tiredness is a symptom of the condition, giving rise the figurative use of the term.

52. Animal that’s been a Japanese Natural Monument since 1931 AKITA
The Akita breed of dog is named for its point of origin, the Akita Prefecture in Japan. When Helen Keller visited Japan in 1937, she asked for and was given an Akita breed of dog, with the name of Kamikaze-go. Sadly, the dog died within a year from distemper. The following year the Japanese government officially presented Keller with a replacement dog. Supposedly Keller’s dogs were the first members of the breed to be introduced into the US. Also, the Akita is the national dog of Japan, and was declared a Japanese National Monument in 1931.

62. L.A. school USC
The University of Southern California (USC) is a private school in Los Angeles. Apart from its excellent academic record, USC is known the success of its athletic program. USC athletes have won more Olympic medals than the students of any other university in the world. The USC marching band is very famous as well, and is known as the “Spirit of Troy”. The band has performed with many celebrities, and is the only college band to have two platinum records.