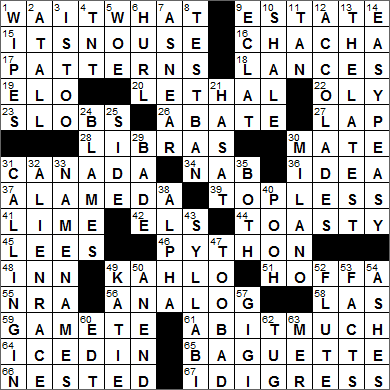 Today’s Wiki-est, Amazonian Googlies
Across
16. Onomatopoeic dance CHA-CHA
The cha-cha-cha (often simplified to “cha-cha”) is a Latin dance with origins in Cuba, where it was introduced by composer Enrique Jorrin in 1953.

19. “Out of the Blue” band ELO
“Out of the Blue” is a double album released in 1977 by ELO. All the tracks were written by band leader Jeff Lynne in just three weeks in a rented chalet in the Swiss Alps. A creative environment I guess …

22. Pabst brand originally brewed in Washington, familiarly OLY
The Olympia Brewing Company was founded in the town of Tumwater, Washington in 1896, by a German immigrant. Olympia (familiarly “Oly”) was acquired by Pabst in 1983.

28. Fall deliveries? LIBRAS
The constellation of Libra is named for the scales held by the goddess of justice. Libra is the only sign of the zodiac that isn’t named for a living creature.

37. Oakland’s county ALAMEDA
The city of Oakland, located in the San Francisco Bay Area, was settled by the Spanish in 1772. The area now known as Oakland was called “encinal” by those early settlers, which translates as “oak grove”, giving the city its name.

41. Gimlet flavor LIME
A gimlet is a relatively simple cocktail, traditionally made with just gin and lime juice. The trend in more recent times is to replace the gin with vodka.

45. Sediment LEES
The dregs in wine, the sediment that settles during fermentation (and sometimes in the bottle), is also called “lees”.

46. Programming language named for a comedy group PYTHON
Python is a computer language, one that my computing son uses quite often apparently. The developers of the language tried hard to make it fun to use, and even chose its name from the comedy show “Monty Python’s Flying Circus”.

Like pilgrims to the appointed place we tend;
The world’s an inn, and death the journey’s end.

49. Mexican painter Frida KAHLO
Frida Kahlo was a Mexican painter, famous for her self-portraits. She was married to the equally famous artist Diego Rivera. Kahlo was portrayed by the actress Salma Hayek in a film about her colorful life called “Frida” released in 2002.

51. Teamsters president James HOFFA
Jimmy Hoffa headed off to meet with two Mafia leaders at a restaurant in a suburb of Detroit on July 30, 1975. The two men he was supposed to meet denied any appointment was made, and they were seen in public in other locations far from the restaurant. Hoffa was spotted by passers-by in the restaurant parking lot, the last time he was ever seen. His wife reported him missing later that night, and the resulting police investigation failed to find Hoffa or his body. Hoffa was declared legally dead in 1982, seven years after he disappeared.

59. Egg, perhaps GAMETE
A gamete is a reproductive cell that has half the full complement of genes needed to make a normal cell. In sexual reproduction, it takes two gametes, one from each parent, to fuse into one cell which then develops into a new organism. The female gamete is the ovum, and the male the sperm.

65. French for “stick” BAGUETTE
“Baguette” is the French word for “wand, baton” as in “baguette magique” (magic wand). The term was first applied to the long stick of bread with a crisp crust in the 1920s.

Down
1. Babies”R”Us buys WIPES
Babies”R”Us is a chain of stores selling specialty baby products that is owned by Toys”R”Us.

3. Half a playground exchange IS TOO!
Is not!

4. Stuff that goes kablooey TNT
Something described as “kablooey” or “kablooie” has been destroyed, blown apart.

8. 1996 treaty subject TEST BAN
The US, UK and Soviet Union signed what is now called the Partial Nuclear Test Ban Treaty in 1963. This partial ban was prompted due to concerns at the time about levels of radioactive elements in the atmosphere, particularly in the southern hemisphere, caused by an increasing number of test detonations. The partial test ban prohibited all detonations other than those performed underground. It took another 33 years before a Comprehensive Nuclear-Test-Ban-Treaty could be negotiated, one which was adopted by the UN General Assembly in 1996. Sadly, as we are all well aware, it has never been enforced. Enforcement is waiting on ratification by China, Egypt, Indonesia, Iran, Israel and the United States, and waiting on signatures from India, North Korea and Pakistan.

9. Panache ECLAT
“Éclat” can mean a brilliant show of success, or the applause or accolade that one receives. The word derives from the French “éclater” meaning “to splinter, burst out”.

30. Pepperidge Farm treat MILANO
Before the Milano, Pepperidge Farm produced what they called the Naples cookie, a vanilla wafer with chocolate on top. But, this lovely morsel had problems when stored or transported in a warm environment as the cookies stuck to each other, The solution was to put the filling between two wafers, and the Milano cookie was born.

32. The Na’vi in “Avatar,” for one ALIEN RACE
In James Cameron’s epic “Avatar”, the “blue people” are the Na’vi, the indigenous species that lives on the lush moon called Pandora. The main Na’vi character featuring in the film is the female Neytiri. According to Cameron, Neytiri was inspired by the Raquel Welch character in the movie “Fantastic Voyage” and the comic book character Vampirella.

40. Bear with a “thotful spot” POOH
Winnie the Pooh’s “Thotful Spot” is where Pooh likes to go to think things out. When in his Thotful Spot, Pooh tends to sit himself on the log, tap his head, close one eye, and utter the words “Think, think, think”.

49. Holmes of “Touched With Fire” KATIE
Katie Holmes is an actress who first came to prominence in the television drama “Dawson’s Creek”. Off screen, Holmes is famous as the ex-wife of Tom Cruise.

“Touched With Fire” is a 2015 film starring Katie Holmes and Luke Kirby as two bipolar poets who meet and fall in love in a psychiatric hospital.

50. Words spoken after coming to? … AN END
Coming to an end.

52. High wind? FLUTE
A flute is a woodwind instrument that doesn’t have a reed. Instead, sound is produced by blowing air across an opening. A flute player is often referred to as a flautist. Flutes have been around a long, long time. The oldest flutes found date back to 43,000 or 35,000 years ago.

57. 1951 title role for Audrey GIGI
“Gigi” is a play by Anita Loos that is based on Colette’s 1945 novella of the same name. “Gigi” opened on Broadway in 1951 with a relatively unknown Audrey Hepburn in the title role, playing a Parisian girl being groomed as a courtesan. In the famous 1958 musical adaptation of the novella, the title role went to Leslie Caron.

Marseille (often written “Marseilles” in English) is the second largest city in France, after Paris. Marseille is also the largest commercial port in the country. I used to live nearby, and it’s a lovely, lovely place.

For the sake of completion, here is a full listing of all the answers:
Across
1. “You’re kidding, right?” WAIT, WHAT?
9. Will matter ESTATE
15. “I give up” IT’S NO USE
16. Onomatopoeic dance CHA-CHA
17. Criminology concerns PATTERNS
18. Weapons used on mounts LANCES
19. “Out of the Blue” band ELO
20. Beyond harmful LETHAL
22. Pabst brand originally brewed in Washington, familiarly OLY
23. They’re slow to pick things up SLOBS
26. Weaken ABATE
27. Runner’s distance LAP
28. Fall deliveries? LIBRAS
30. Play or school follower -MATE
31. Alouette 1 satellite launcher CANADA
34. Catch NAB
36. “Good __!” IDEA
37. Oakland’s county ALAMEDA
39. Like some beaches TOPLESS
41. Gimlet flavor LIME
42. 2011 World Golf Hall of Fame inductee ELS
44. By the fire, say TOASTY
45. Sediment LEES
46. Programming language named for a comedy group PYTHON
48. “The world’s an __”: Dryden INN
49. Mexican painter Frida KAHLO
51. Teamsters president James HOFFA
55. Gp. with carriers NRA
56. Like old timers? ANALOG
58. Word in many Mexican place names LAS
59. Egg, perhaps GAMETE
61. More than one can handle A BIT MUCH
64. Stuck at a chalet, maybe ICED IN
65. French for “stick” BAGUETTE
66. Fit one within another NESTED
67. “There was a point here somewhere” I DIGRESS