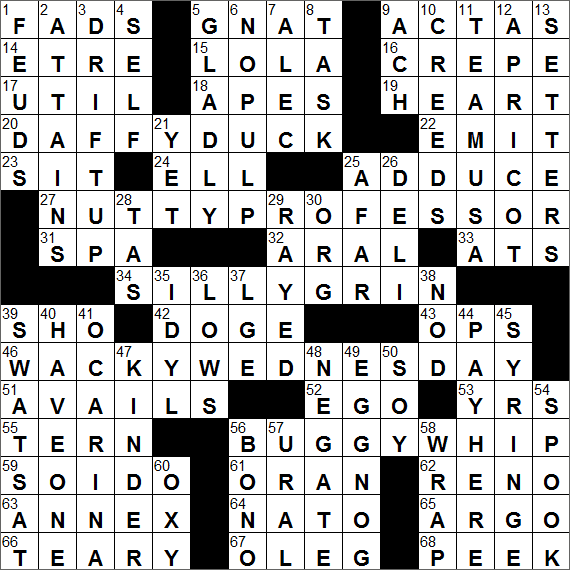 Today’s themed answers each start with a synonym of “goofy”.

The Copacabana of song is the Copacabana nightclub in New York City (which is also the subject of the Frank Sinatra song “Meet Me at the Copa”). The Copa opened in 1940 and is still going today although it is struggling. The club had to move due to impending construction and is now “sharing” a location with the Columbus 72 nightclub.

Her name was Lola, she was a showgirl
With yellow feathers in her hair and a dress cut down to there
She would merengue and do the cha-cha
And while she tried to be a star
Tony always tended bar
Across the crowded floor, they worked from 8 til 4
They were young and they had each other
Who could ask for more?

Dian Fossey carried out her famous study of gorilla populations in the mountain forests of Rwanda (NB: it was Jane Goodall that worked with chimpanzees). Sadly, Fossey was found dead in her cabin in Rwanda in 1986, murdered in her bedroom, her skull split open by a machete. The crime was never solved.

“To adduce” is to cite as an example or as a means of proof.

The 1963 comedy film “The Nutty Professor” is a parody of Robert Louis Stevenson’s novella “Dr. Jekyll and Mr. Hyde”. Star of the film is Jerry Lewis, and filming was mainly on the Arizona State University campus in Tempe, Arizona. “The Nutty Professor” as remade in 1996 starring Eddie Murphy.

“Shameless” is a comedy drama TV series about a dysfunctional Chicago family consisting of a six children and single father who spends his days drunk. The US show is a remake of the original British “Shameless” that is based on a similar family who live in Manchester in the North of England.

Dr. Seuss was the pen name of Theodor Seuss Geisel. He first used the pen name while studying at Dartmouth College and at the University of Oxford. Back then, Geisel pronounced “Seuss” as it would be in German, i.e. rhyming with “voice”. After his books found success in the US, he went with the pronunciation being used widely by the public, quite happy to have a name that rhymed with “Mother Goose”.

“Self” is a women’s magazine that has been published since 1979. It is a publication that focuses on health, beauty, wellness and style.

The Tropicana company is most famous for its orange juice. The company is headquartered in Chicago, where not many oranges are grown …

A creed is a confession of faith, or a system of belief or principles. The word “creed” comes from the Latin “credo” meaning “I believe”.

Cruciverbalist is a term developed in the 1990s to describe crossword enthusiasts. The word comes from the Latin for cross (crux) and word (verbum). “Cruciverbalist” is sometimes limited to those who actually construct the puzzles. Over on the other side of the Atlantic, we call such people “setters”.

An ocarina is an ancient wind-instrument that sounds like and is played like a flute. Usually an ocarina has an egg-shaped body with a number of finger holes cut into the material making up the instrument (usually ceramic). There is a tube protruding from the body through which one blows to make sounds. The air vibrates within the body of the instrument, and the pitch of the vibrations is changed by covering and uncovering the finger-holes. Ocarinas date back as far as 12,000 years ago when they were used both in China and Central America. The ocarina was brought to Italy in the 1800s where it became popular as a child’s toy, but also as a serious instrument. It was given the name “ocarina” as its shape resembles that of a goose, and “ocarina”is a diminutive word stemming from “oca”, the Italian word for “goose”.

Occidental Petroleum is an oil and gas company based in Houston that was founded in 1920 in California.

3…Rise slowly, as smoke..DRIFT UP