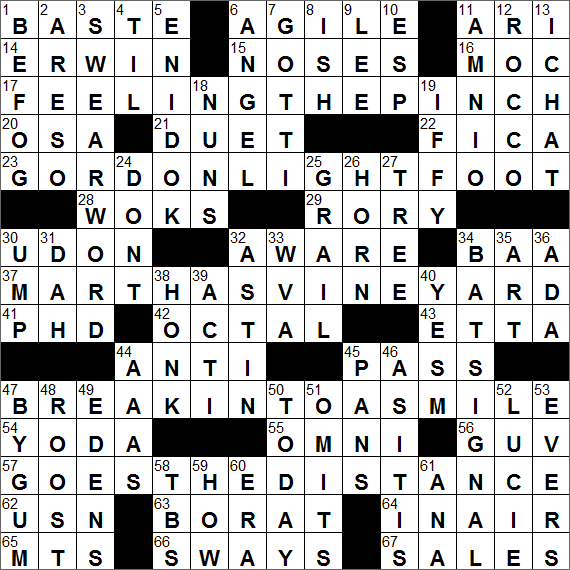 Today’s themed answers each end with a hidden word, a DISTANCE. Those distances get progress down the grid, from INCH to MILE:

Erwin Schrödinger was an Austrian theoretical physicist, one of the so-called “fathers of Quantum Mechanics”. He won the Nobel Prize for Physics in 1933 for developing the Schrödinger Equation, the “Newton’s Law” of Quantum Mechanics. Famously, Schrödinger devised a thought experiment that illustrates the concept of a paradox. The scenario, known as “Schrödinger’s cat”, presents us with a cat that can be both alive and dead at the same time. I used to be able to Schrödinger’s Cat, and then I got old …

“Moc” is short for “moccasin”, the type of shoe.

Rory McIlroy is a very successful golfer from Northern Ireland. McIlroy is a relatively young man and a former world number one on the circuit, so folks can’t help but compare him to Tiger Woods. He is first European to win three different majors. Along with Jack Nicklaus and Tiger Woods, McIlroy is one of the only three people to win three majors before the age of 25.

PhD is an abbreviation for “philosophiae doctor”, Latin for “teacher of philosophy”.

Yoda is one of the most beloved characters of the “Star Wars” series of films. Yoda’s voice was provided by the great modern-day puppeteer Frank Oz of “Muppets” fame.

Omni Hotels & Resorts is headquartered in Dallas, Texas and has properties in the US, Canada and Mexico. The first Omni property opened in 1958, and Omni were the first large hotel chain to not offer in-room adult movies.

The Hyatt hotel chain takes its name from the first hotel in the group, that was purchased in 1957 i.e. Hyatt House at Los Angeles International Airport. Among other things, Hyatt is famous for designing the world’s first atrium hotel, the Hyatt Regency in Atlanta.

“Guv” is an informal word replacing “governor”, used in the UK. It is usually a friendly address to a man, sort of like our “Mac” or “Dad”.

The words “bombs bursting in air” come from “The Star-Spangled Banner” written by Francis Scott Key.

An angel investor is one who provides capital very early in a business’s life cycle. The term “angel” is borrowed from Broadway, where angels were wealthy people who provided funds to stage theatrical productions.

The Lee company famous for making jeans was formed in 1889, by one Henry David Lee in Salina, Kansas.

“Fidelio” is Ludwig van Beethoven’s one and only opera, and a work that he really struggled with. “Fidelio” tells of a woman named Leonore who disguises herself as a prison guard in order get her condemned husband out of prison.

The Holy Grail is theme found throughout Arthurian legend. The grail itself is some vessel, with the term “grail” coming from the Old French “graal” meaning “cup or bowl made of earth, wood or metal”. Over time, the legend of the Holy Grail became mingled with stories of the Holy Chalice of the Christian tradition, the cup used to serve wine at the Last Supper. Over time, the term “grail” came to be used for any desired or sought-after object.

Sean Astin is best known for playing the title role in the 1993 film “Rudy” and the character Samwise Gamgee in the “Lord of the Rings” movies. You might also have seen him playing Lynn McGill in the 5th season of “24”. Astin is the son of actress Patty Duke.

The state of West Virginia was formed during the civil war when the western counties in the old state of Virginia voted to secede from the Confederate state.

Batman is an ally of Police Commissioner Gordon of Gotham City. Gordon orders the shining of a searchlight into the sky, known as the Bat-Signal, to summon Batman when he is needed.

57…Finishes a task, and a hint to hidden words in this puzzle’s four other longest answers..GOES THE DISTANCE