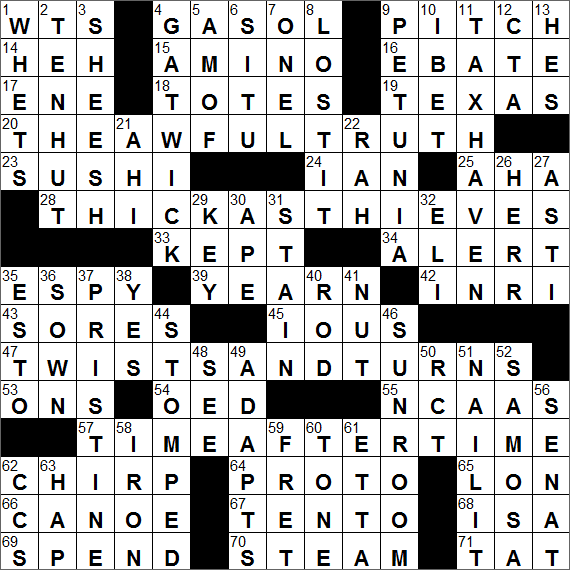 Today’s themed answers are phrases starting with the letters TAT:

Pau Gasol is a Spanish basketball player who now plays for the Chicago Bulls. Pau’s younger brother is Marc, who plays for the Memphis Grizzlies.

Awards ceremony since 1993 : ESPYS. The ESPY Awards are a creation of the ESPN sports television network. One difference with similarly named awards in the entertainment industry is that ESPY winners are chosen solely based on viewer votes.

In many of the Christian traditions, a crucifix is a representation of Jesus on the cross. The term comes from the Latin “cruci fixus” meaning “fixed to a cross”.

The “Oxford English Dictionary” (OED) contains over 300,000 “main” entries and 59 million words in total. It is said it would take a single person 120 years to type it out in full. The longest entry for one word in the second edition of the OED is the verb “set”. When the third edition was published in 2007, the longest entry for a single word became the verb “put”. Perhaps not surprisingly, the most-quoted author in the OED is William Shakespeare, with his most quoted work being “Hamlet”. The most-quoted female author is George Eliot (aka Mary Ann Evans).

The National Collegiate Athletic Association (NCAA) dates back to the Presidency of Theodore Roosevelt. When his son broke his nose playing football at Harvard, President Roosevelt turned his attention to the number of serious injuries and even deaths occurring in college sports. He instigated meetings between the major educational institutions leading to the formation of the Intercollegiate Athletic Association of the United States (IAAUS) in 1906, which was given the remit of regulating college sports. The IAAUS became the NCAA in 1910.

“Time After Time” is a fabulous 1984 song recorded and co-written by Cyndi Lauper. Lauper wrote the song, starting from the title, which she lifted from the 1979 sci-fi movie “Time After Time” starring Malcolm McDowell and Mary Steenburgen.

If you’ve ever heard Cyndi Lauper speaking, you’d know that she was from Queens, New York. She is the daughter of divorced parents, strongly influenced by a supportive mother. She was always a free spirit, and even as young teen in the mid-sixties she dyed her hair different colors and wore outlandish fashions. She was a young woman who wanted to “find herself”, and to that end she once spent two weeks alone in the woods up in Canada. Well, just with her dog.

“Ten-hut!” is a term used in the US Military, and it means “come to attention!”.

Gatwick is London’s second-largest and second-busiest international airport, after Heathrow. Gatwick has just one runway, and it is the world’s busiest, handling up to 55 aircraft movements per hour.

Petunia Pig is a cartoon character in the “Looney Tunes” and “Merrie Melodies” universes. Petunia is the girlfriend of Porky Pig and has been around since 1937.

The Chicago “L” is the second largest rapid transit system in the US, with the New York City Subway being the largest. The “L” is also the second oldest, again with the New York City Subway system having the honor of being around the longest. Note that the official nickname for the system is the “L” (originally short for “elevated railroad”), although the term “El” is also in common use (especially in crosswords as “ELS”). The L is managed by the Chicago Transit Authority (CTA).

Münster is a city in the northwestern part of Germany, in the Westphalia region. Münster is noted for being the most bicycle-friendly city in the country with almost 40% of all traffic in the city being cyclists.

The species of citrus fruit called a key lime is so named due to its association with the Florida Keys.

Something described as “pristine” has its original purity, is uncorrupted.

Our everyday usage of “nut” is often at odds with the botanical definition of the term. Examples of “true nuts” are acorns, chestnuts and hazelnuts. On the other hand, even though we usually refer to almonds, pecans and walnuts as “nuts”, botanically they are classified as “drupes”. True nuts and drupes are both fruits, the vehicle that flowering plants use to disseminate seeds. True nuts are examples of a “dry fruit”, a fruit that has no fleshy outer layer. Drupes are examples of “fleshy fruits”, a fruit with a fleshy outer layer that often makes it desirable for an animal to eat. Familiar examples of drupes are cherries, peaches and plums. We eat the fleshy part of these drupes, and discard the pit inside that contains the seed. Other examples of drupes are walnuts, almonds and pecans. The relatively inedible flashy part of these drupes is usually removed for us before they hit our grocery stores shelves. We crack open the pit inside and eat the seed of these drupes. And while we do that, we forget that we’re eating something akin to a cherry or a peach, and we call it a nut!

A samosa is quite a tasty appetizer, usually a triangular-shaped savory that often has a vegetarian filling. The word “samosa” is primarily used on Indian menus, and the name comes from “sanbosag”, the name for the dish in Persia.

Henry “Hap” Arnold was the Commanding General of the US Army Air Corps during the Second World War. Before the war, Arnold was taught to fly by the Wright Brothers. After the war, Arnold was one of the co-founders of Pan American Airways, but opted not to become president of the company and instead remained in the military.

20…Painful reality that one doesn’t want to face..THE AWFUL TRUTH

47…Features of many mountain roads..TWISTS AND TURNS

67…Five minutes past a quarter of..TEN TO

51…Stick the landing, say..NAIL IT

58…Get the creases out of..IRON