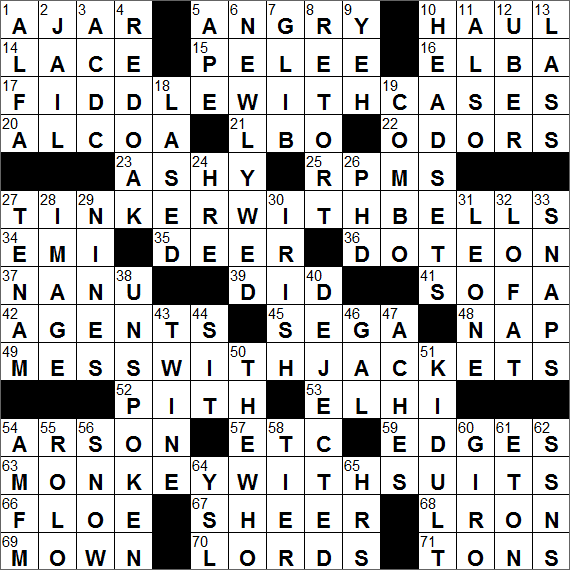 Theme: In the Middle With

Today’s themed answers are common items, but the word WITH has been inserted in the middle of the two-word name to give a completely new meaning:

Mount Pelee on the Caribbean island of Martinique is still active and is considered one of the most dangerous volcanoes on the planet. When it erupted in 1902, it killed over 30,000 people. Most of those fatalities occurred when a cloud of hot gases settled over the town of St. Pierre, instantly igniting everything that was flammable.

Mork & Mindy was broadcast from 1978 to 1982. We were first introduced to Mork (played by Robin Williams) in a special episode of “Happy Days”. The particular episode in question has a bizarre storyline culminating in Fonzie and Mork having a thumb-to-finger duel. Eventually Richie wakes up in bed, and alien Mork was just part of a dream! Oh, and “Nanu Nanu” means both “hello” and “goodbye” back on the planet Ork. “I am Mork from Ork, Nanu Nanu”. Great stuff …

Sega is a Japanese videogame company headquartered in Tokyo. Sega actually started out 1940 in the US as Standard Games and was located in Honolulu, Hawaii. The owners moved the operation to Tokyo in 1951 and renamed the company to Service Games. The name “Sega” is a combination of the first two letters of the words “Se-rvice” and “Ga-mes”.

A parka is a hooded, often fur jacket that is worn in cold weather. The original parka was a pullover design, but nowadays it is usually zipped at the front. “Parka” is the Russian name for the garment , absorbed into English in the late 1700s via the Aleut language.

Pith helmets were worn by mainly Europeans in the tropics, often on safari or as part of a military uniform. The helmet was light in weight, covered with cloth and made from cork or pith. Pith helmets were also called safari helmets, topees and topis.

The Holy Roman Empire (HRE) existed from 962 to 1806 AD and was a territory of varying size over the centuries that centered on the Kingdom of Germany. The HRE was a successor to the western half of the Ancient Roman Empire.

An adult who exhibits traits more akin to that of an adolescent is sometimes referred to as a “kidult” or an “adultescent”.

David Cameron was Prime Minister of the UK from 2010 until 2016. Conservative Cameron came to power as the head of a coalition government with the Liberal Democrats. The Conservative Party emerged victorious in a 2015 general election, after which Cameron led a majority government. Cameron’s administration will surely be remembered in part for two major referenda. In one, Scotland voted by a narrow majority to remain in the UK. In the second, the UK voted to exit the European Union, a vote that led to Cameron’s resignation the next day.

A Social Security number (SSN) is divided into three parts i.e AAA-GG-SSSS, Originally, the Area Number (AAA) was the code for the office that issued the card. Since 1973, the Area Number reflects the ZIP code from which the application was made. The GG in the SSN is the Group Number, and the SSSS in the number is the Serial Number. However, this is all moot, as since 2011 SSN’s are assigned randomly.

17…Tweak some violin holders?..FIDDLE WITH CASES (from “fiddle cases”)

63…Tweak some business outfits?..MONKEY WITH SUITS (from “monkey suits”)