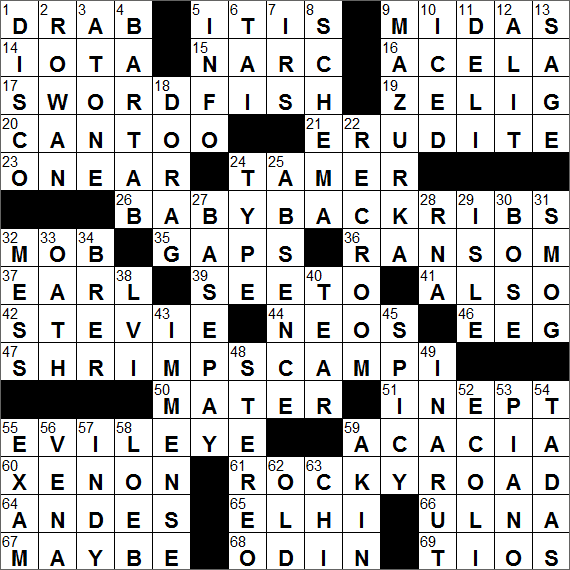 Today’s themed answers are GLUTEN-free fare, names of dishes that do not include the letters G, L, U, T, E nor N:

Zelig is a 1983 film by Woody Allen. “Zelig” tells the fictitious story, in documentary style, of Leonard Zelig (played by Allen) who has the gift of being able to change his appearance in order to better fit in with the company he keeps. He becomes famous as a “human chameleon”. By using archive footage, the film includes clever “cameos” by real figures from history (like Calvin Coolidge, Herbert Hoover and Susan Sontag).

“Erudite” is a lovely-sounding word meaning “learned, well-educated”. The term comes from the Latin verb “erudire” meaning “to educate”, or more literally “to bring out of the rough”.

A duffel bag is cylindrical tote bag with a drawstring top, often used by military personnel. The bag is made of this cloth, a cloth that originally came from the town of Duffel in Belgium, hence the name.

Meats placed between slices of bread was first called a sandwich in the 18th century, named after the Fourth Earl of Sandwich. The Earl was fond of eating “sandwiches” while playing cards at his club.

The “evil eye” is a curse that is cast by giving a malicious glare.

Some members of the Mimosa genus of plant are capable of rapid movement. For example, if you touch the leaves of the Mimosa pudica, they curl up in less than a second.

One use of xenon gas is in flash tubes. The gas is ionized into a light emitting plasma by discharging a high voltage through it, using current stored in a capacitor.

“Wotan” is an alternative (High German) spelling of the name Woden, the Anglo-Saxon version of the Norse god Odin. Wotan is the head god in the pagan tradition, but as paganism was gradually replaced by Christianity in the 7th and 8th centuries, Wotan moved from his place in religion and into the realm of folklore. Indeed, he is a precursor of our modern day Father Christmas. Wotan (Woden) also gave his name to Wednesday, Woden’s Day …

“Poop” is a slang term meaning “relevant and up-to-date information”. Back in the 1940s, a “poop sheet” was a bulletin with the latest information.

A schema is an outline or a model. The plural of “schema” is “schemata” and the adjectival form is “schematic”.

A mazurka is a Polish folk dance. The great French-Polish composer Frédéric Chopin was known for writing many mazurkas for solo piano.

Hip-hoppers might wear do-rags today, but they have been around for centuries. If you recall the famous image of Rosie the Riveter, she was wearing a do-rag. The etymology is pretty evident, a piece of cloth (rag) to hold a hairstyle (do) in place.

A bandanna is a large kerchief that is usually worn on the head or around the neck. The term “bandanna” comes from the Hindi word meaning “to tie”.

“Smog” is a portmanteau word formed by melding “smoke” and “fog”. The term was first used to describe the air around London in the early 1900s. Several cities around the world have a reputation of being particularly smoggy. For example, the most smog-plagued city in Latin America is Mexico City, which is located in a highland “bowl” that traps industrial and vehicle pollution.

The Scoville scale is a measure of the spiciness of chili pepper. The scale was invented by a pharmacist in 1912, Wilbur Scoville. To determine the position of a pepper on Scoville scale, the amount of capsaicin in the chili is measured. Capsaicin is an irritant that causes the sensation of burning when it comes into contact with tissue, particularly the mucous membranes.

49…Making no progress..IN A RUT