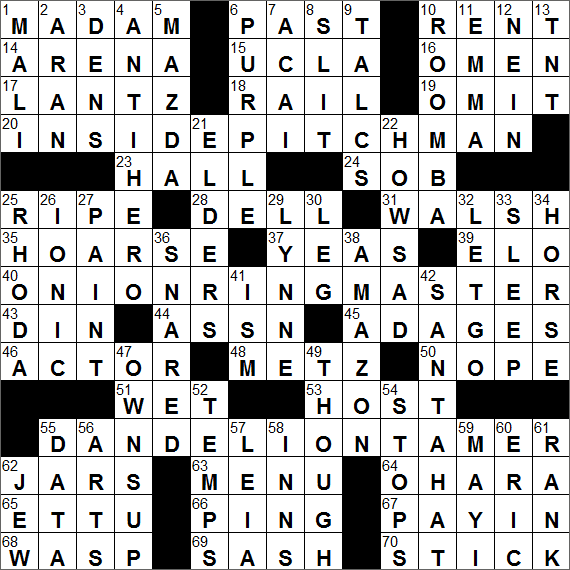 Today’s themed answers are actually two answers that share a common word, but are mashed together. The end result is a very special circus employee:

“Madam Secretary” is TV show that first aired in 2014. It is about an ex-CIA analyst who is appointed as US Secretary of State. Téa Leoni plays the title role, ably supported by a favorite actress of mine, Bebe Neuwirth. I like this show …

The Honda Center is home to the NHL’s Anaheim Ducks. Formerly known as the Arrowhead Pond of Anaheim, it was renamed to the Honda Arena in 2006, with Honda paying $60 million for the naming rights for fifteen years.

A brushback is a baseball pitch designed to intimidate, to push the batter back and away from the plate.

Kerri Walsh Jennings was partner with Misty May-Treanor when they won three gold medals in beach volleyball in the 2004, 2008 and 2012 Summer Olympic Games.

The Emmy Awards are the television equivalent of the Oscars in the world of film, the Grammy Awards in music and the Tony Awards for the stage. Emmy Awards are presented throughout the year, depending on the sector of television being honored. The most famous of these ceremonies are the Primetime Emmy Awards and the Daytime Emmy Awards. The distinctive name of “Emmy” is a softened version of the word “immy”, the nickname given to the video camera tubes found in old television cameras.

The city of Metz is in the northeast of France, close to the German border. Given the proximity to Germany, Metz has both a strong German tradition and a strong French tradition. Metz was handed over to the French following WWI, after nearly 50 years of German rule. It quickly fell back into German hands in 1940 during WWII, with many German officers delighted to have back the city of their birth. Perhaps because of this long association with Germany, the US Army under General Patton encountered stiff resistance when liberating Metz in 1944. The cathedral in Metz is home to the largest expanse of stained glass in the world, almost 70,000 square feet in all.

The name “dandelion” comes from the French “dent de lion” meaning “lion’s tooth”. The name is a reference to the coarse, tooth-like edges of a dandelion’s leaves.

Scarlett O’Hara’s home is the Tara plantation, in Margaret Mitchell’s “Gone with the Wind”. Tara was founded not far from the Georgia city of Jonesboro by Scarlett’s father, Irish immigrant Gerald O’Hara. Gerald won the square mile of land on which Tara was built in an all-night poker game. He named his new abode after the Hill of Tara back in his home country, the ancient seat of the High King of Ireland.

In the world of computer science, the original “ping” was (and still is) a test message sent over a network between computers to check for a response and to measure the time of that response. We now use the verb “to ping” more generally, meaning to send someone a message, usually a reminder.

That would be in the world of scouting.

An “antihero”, perhaps in a movie or novel, is the “hero” of the piece, but someone who doesn’t exhibit the qualities associated traditionally with a hero, such as bravery or moral fortitude.

Jane Austen’s novel “Emma” is the tale of Emma Woodhouse and the wonderful George Knightley. At the end of the story, Emma marries Knightley and her young friend Harriet marries Robert Martin, who had been trying to get Harriet’s attention practically from page one of the novel!

Nürnberg (anglicized as “Nuremberg”) is a Bavarian city located north of Munich. Historically it is remembered for the huge Nazi Nuremberg rallies, and the Nuremberg trials that took place at the end of WWII. Nürnberg is sometimes confused with the city of Nürburg in the west of Germany, famous for the Nürburgring race track.

Jeff Lynne is a singer-songwriter best known as the leader of the Electric Light Orchestra (ELO). Lynne went on to form the Traveling Wilburys supergroup, along with Bob Dylan, George Harrison, Roy Orbison and Tom Petty.

The phrase “To sleep — perchance to dream” comes from Hamlet’s famous “To be or not to be” soliloquy:

To die — to sleep.
To sleep — perchance to dream: ay, there’s the rub!

A “rub” is a difficulty or obstruction. The usage predates Shakespeare, and comes from the game of lawn bowls in which a rub is a fault in the bowling surface.

Amazon Prime is a membership service that Amazon introduced in 2005. From my perspective, the main features coming with Amazon Prime are free two-day shipping and a large collection of free movies and TV shows that are available for streaming.

The Days Inn hotel chain was founded in 1970 by a real estate developer called Cecil B. Day. One of the features of a Days Inn hotel in those early days was an on-site gas pump, which dispensed gasoline at discount prices.

The first Holiday Inn hotel was opened in 1952. The name for the hotel chain was inspired by the 1942 movie “Holiday Inn” starring Bing Crosby and Fred Astaire.

Eric Carle is a very successful children’s author and book illustrator, with over 100 million of his books sold around the world. Carle’s most famous title is “The Very Hungry Caterpillar”, and it alone has sold 30 million copies.

54…Dots on a subway map..STOPS