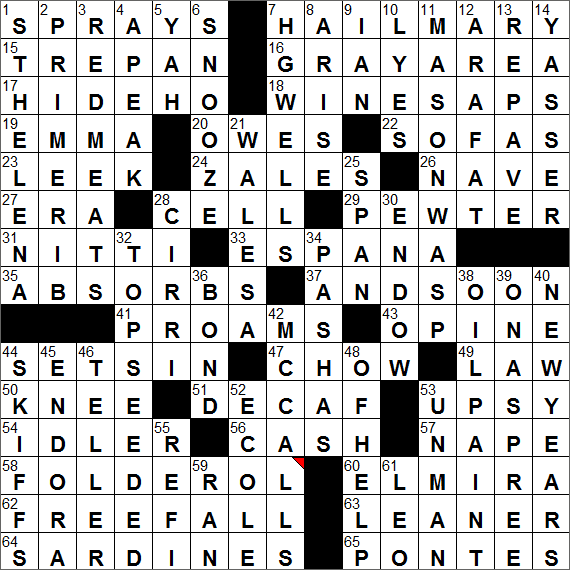 7…Pass after all else failed?..HAIL MARY

A “Hail Mary pass” (also called “the long bomb”) is a desperation move in American football in which a long pass is thrown with very little chance of a success, right at the the end of a game or at the end of a half. The term dates back to thirties, and was probably first used at Notre Dame. The “Hail Mary” is a prayer in the Christian tradition that is of particular significance Roman Catholicism.

A trepan is a boring tool used to sink mineshafts.

Cab Calloway was a famous jazz singer and bandleader who enjoyed most of his fame in the thirties and forties. His best known recording was the song “Minnie the Moocher” which had a chorus that used the “words” “hi-de-hi” and “hi-de-ho”. Calloway became so associated with the song he earned the nickname “The Hi De Ho Man”.

A winesap is a small and tart apple, often used for making cider.

There are a couple of theories about the origins of the Jonathan cultivar of apple. The most likely is that it was developed from an Esopus Spitzenburg seedling on a farm in Woodstock, New York. Originally called the “Rick” apple, after farm-owner Philip Rick, it was renamed by the president of the Albany Horticultural Society. He chose the name “Jonathan” after Jonathan Hasbrouck, a society member who brought the cultivar to the president’s attention.

Emma Watson is the English actress famous for playing Hermione Granger in the “Harry Potter” series of movies. Watson continued her education while pursuing her acting career and studied at Brown University in Providence, Rhode Island.

The first Zales jewelry store was opened by Morris and William Zale and Ben Lipshy in Wichita Falls, Texas, in 1924. Zales became successful largely by offering credit to their customers, a revolutionary concept at the time.

In large Christian churches, the nave is the main approach to the altar, where most of the congregation are seated.

Frank Nitti was one of the top henchmen working for Al Capone. Unlike American-born Capone, Nitti was actually from Italy and was born near the city of Salerno. When Capone was eventually put away for 11 years for tax evasion, Nitti was convicted of the same crime. Nitti was only imprisoned for 18 months, and when released he was labelled as the new head of Capone’s Chicago Outfit. However the truth seems to be that he was just a frontman, with others making the decisions.

“Capone” is a 1975 biopic about infamous gangster Al Capone, with Ben Gazzara playing the title character. Sylvester Stallone makes an early film appearance as Frank “The Enforcer” Nitti, just one year before he hit the big time with “Rocky”.

In Spanish, “Spain” is written as “España”.

“Tourney” is another word for a tournament. The term comes from the Old French word for “contest of armed men”, with “tournoier” meaning “to joust, jilt”.

“Chow” is an American slang term for food that originated in California in the mid-1800s. “Chow” comes from the Chinese pidgin English “chow-chow” meaning “food”.

In law, a “brief” is a written argument submitted to a court. The term ultimately derives from the Latin “brevis” meaning “short”.

“Upsy-daisy” is an interjection sometimes used when lifting up a child. It’s “baby talk”, words of reassurance.

In anatomical terms, a “pons” (plural “pontes”) is a slender tissue joining two parts of an organ. “Pons” is Latin for “bridge”. Sometimes the term “pons” is used to describe a band of nerve fibers on the front of the brain stem that links (“bridges”) the medulla oblongata and the cerebellum with the upper part of the brain. This band is referred to more completely as the pons Varolii.

St. Helena is a city in the Napa Valley wine region of California. There is only one chain restaurant within the city limits, because legislation was passed preventing chain restaurants from setting up shop in St. Helena. That one restaurant was in business before the law was enacted.

“Apeak” is a nautical term meaning “vertical”, as in “the oarsmen held their oars apeak”.

You snooze, you lose.

7…”The Shape of Things to Come” author..HG WELLS

The HG Wells science-fiction tale “The Shape of Things to Come”, written in 1933, predicts a global conflict (WWII) that breaks out in 1940 lasting for ten years, after which chaos reigns as no victor emerges. After worldwide plague, a benevolent dictatorship emerges and the world moves towards a serene utopia. In time, the dictators are overthrown and peacefully retired, and the people of the Earth live happily ever after. All are citizens of one global state, with its capital in Basra in the Middle East.

Ian Ziering is an actor best-known for playing Steve Sanders on the TV show “Beverly Hills, 90210”.

Potter wasps (also known as “mason wasps”) are named for the shape of the mud nest that they build.

Back in Ireland, the “pavement” is what we call the “footpath” (because the footpath is “paved”!). It’s very confusing when you arrive in this country from Ireland, and a little dangerous when one has been taught to “walk on the pavement” …

Yasser (also Yasir) Arafat was born in Cairo in 1929, the son of two Palestinians and the second-youngest of seven children. Arafat was beaten by his father as a child and so did not have a good relationship with him. Arafat did not attend his father’s funeral, nor did he visit his grave. The beatings were apparently administered because the young Arafat was repeatedly attending religious services in the Jewish quarter of Cairo. Arafat’s explanation was that he wanted to “study the mentality” of the Jewish people.

A “seeded” player or team in a tournament is one given a preliminary ranking that is used in the initial draw. The intention is that the better competitors do are less likely to meet each other in the early rounds.

A pasha was a high-ranking official in the Ottoman Empire, roughly equivalent to the English rank of “lord”.

Leonardo da Vinci was perhaps the most diversely talented person who ever contributed to society. He was a gifted painter, sculptor, architect, musician, mathematician, engineer, inventor, anatomist, geologist, cartographer and writer. Da Vinci’s mural “The Last Supper” is the most reproduced work of art in the world.

“McCall’s” was a women’s magazine published monthly. The magazine started out life in 1873 under the title “The Queen”, becoming “McCall’s Magazine—The Queen of Fashion” in 1897. Entertainer Rosie O’Donnell took over editorial direction in 2000, and the publication was renamed to “Rosie” in 2001. “Rosie” folded at the end of 2002.

In the television sitcom “Bewitched”, Endora was Samantha’s mother, with mother, daughter and indeed granddaughter having the magical powers accorded to witches. Endora was played flamboyantly by Agnes Moorehead.

The verb “to unman” means to deprive of courage or virility. Back in the late 16th century, the term meant “to deprive of the attributes of a human being”.

7…Pass after all else failed?..HAIL MARY

28…Word on a business card..CELL

37…Replacement for unlisted items..AND SO ON

7…”The Shape of Things to Come” author..HG WELLS

59…Fared poorly in the wash..RAN