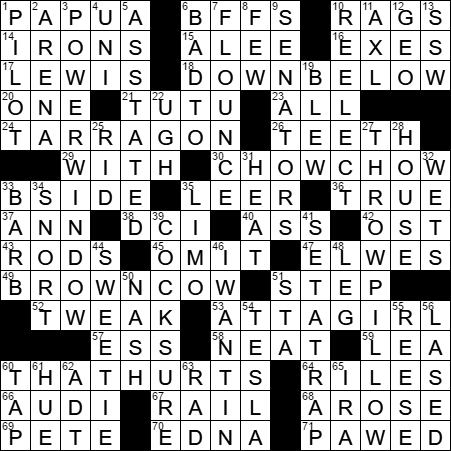 Lewis Black is a standup comedian who is known for an angry demeanor during his routines.

The word “tutu”, used for a ballet dancer’s skirt, is actually a somewhat “naughty” term. It came into English from French in the early 20th century. The French “tutu” is an alteration of the word “cucu”, a childish word meaning “bottom,” or “backside”.

Tarragon is a herb in the sunflower family that is also known by the name estragon. There are several subspecies, with “French tarragon” being the variety most commonly used for cooking. Other subspecies are known as Russian tarragon, Spanish tarragon and wild tarragon.

Cary Elwes is an English actor, perhaps most noted for appearing in the 1987 film “The Princess Bride”. He also played the title role in 1993’s “Cary Elwes”. Cary is the son of a celebrated English portrait painter, Dominick Elwes.

“Kiss the Girls” is a 1997 big-screen adaptation of the 1995 James Patterson psychological thriller novel of the same name. The protagonist in the film, psychologist Alex Cross, is played by Morgan Freeman. Freeman reprises the role in the 2001 sequel “Along Came a Spider”.

Brown Cow yogurt was introduced in 1975, operating from a small farm in Ithaca, New York. The company name was chosen in honor of Lily, a brown cow on the farm. Nowadays, Brown Cow yogurt is produced in Antioch, California.

The name of the automotive manufacturer Audi has an interesting history. The Horch company was founded by August Horch in 1909. Early in the life of the new company, Horch was forced out of his own business. He set up a new enterprise and continued to use his own name as a brand. The old company sued him for using the Horch name so a meeting was held to choose something new. Horch’s young son was studying Latin in the room where the meeting was taking place. He pointed out that “Horch” was German for “hear” and he suggested “Audi” as a replacement, the Latin for “listen”.

Edna St. Vincent Millay was an American poet and playwright, the third woman to receive the Pulitzer Prize for Poetry (in 1923 for “The Ballad of the Harp-Weaver”). Millay was noted not only for her work, but also for the open arrangement that she and her husband had in their marriage. Millay took many lovers, including the poet George Dillon for whom she wrote a number of sonnets.

A flounce is a strip of fabric that has been gathered to create the appearance of fullness, like a wide ruffle. Flounces are usually sewn onto the edge of skirts.

Geopolitics is the study of human and physical geography on international politics and relations. An example of geopolitics would be US policy when it comes to the production of oil around the world, given the nation’s status as the world’s leading oil consumer.

To be “cocksure” is to be confident, “as assured as a cock”. English author D. H. Lawrence introduced us to a female version of the term: “hensure”.

The Paris Métro is the busiest underground transportation system in western Europe, carrying about 4.5 million passengers a day, about the same as the New York City Subway. The system took its name from the company that originally operated it, namely “La Compagnie du chemin de fer métropolitain de Paris”, which was shorted to “Métro”. The term “Metro” was then adopted for similar systems in cities all over the world.

14. Three through nine, in many golf club sets : IRONS

60. Pained expression, and a hint to two cries hidden in each answer to a starred clue : THAT HURTS!

5. Per what was previously mentioned : AS STATED