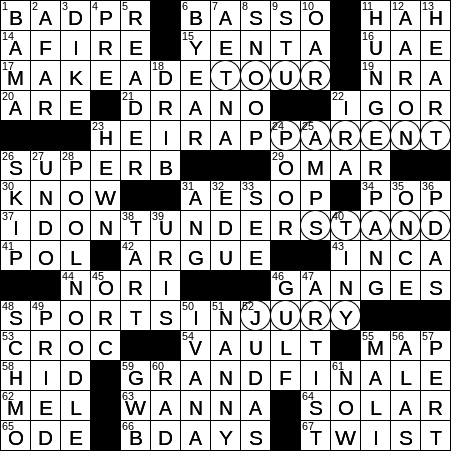 The “Grand Tour” was a rite of passage for young wealthy men, mainly in the 18th century. Rich families (especially the English) would send off their sons after finishing their schooling to be exposed to the various cultures across Europe. Essential stops along the way were Paris, Venice and Rome.

To clean out drains we might buy Crystal Drano which is sodium hydroxide (lye) mixed with sodium nitrate, sodium chloride (table salt) and aluminum. The contents of Drano work in concert to clear the clog. The lye reacts with any fats creating soap which may be enough to break up the clog. Also, the finely-divided aluminum reacts with water creating tremendous heat so that that mixture boils and churns, then any hair or fibers are cut by the sharp edges of the nitrate and chloride crystals. Having said all that, I find that boiling water poured down the drain almost always does the job …

The River Ganges rises in the western Himalaya and flows through the northeast of India before crossing into Bangladesh where it enters the Bay of Bengal. The Ganges is worshipped by Hindus as the goddess Ganga, and is the most sacred of all rivers in Hinduism.

A grand jury is a group of 16-23 citizens who are empowered to investigate potential criminal conduct. Only the US and Liberia use grand juries today, with the rest of the world employing other forms of preliminary hearing. The phrase “grand jury” has its roots in French, with “grand” implying “large”. The 12-person jury used in a criminal trial can be referred to as a “petit” (small) jury.

In J. M. Barrie’s play “Peter Pan”, it is not specifically stated how Captain Hook lost his hand, although previous writings by Barrie reveal that Peter Pan cut it off during a swordfight. What is revealed is that Peter fed the severed hand to a crocodile, and that crocodile pursues Captain Hook for the rest of his days, seeking to finish off his meal. The crocodile also swallowed a clock, and the ticking of the clock warns Captain Hook of his pursuer’s approach.

Our word “map” comes from the Latin “mappa” meaning “napkin, cloth”. Maps were drawn on cloth, hence the name.

Mel Blanc was known as “The Man of a Thousand Voices”. We’ve all heard Mel Blanc at one time or another, I am sure. His was the voice behind such cartoon characters as Bugs Bunny, Daffy Duck, Porky Pig, Tweety Bird, Woody Woodpecker, Elmer Fudd and Barney Rubble. And the words on Blanc’s tombstone are … “That’s All Folks”.

There are several mnemonics used to remember the planets and the order in which they are found in the Solar System. One example is “My Very Easy Method Just Shows Us Nine Planets” which doesn’t really work since Pluto was relegated from “planethood”. The most oft-quoted mnemonic for the eight planets is “My Very Eager Mother Just Served Us Nachos”. Given the relegation of Pluto, I kind of like “Many Very Educated Men Just Screwed Up Nature”.

The English poet John Keats died in Rome in 1821, and is buried there in the Protestant Cemetery. His last wish was that his grave be marked with a tombstone bearing just the words “”Here lies One whose Name was writ in Water”, and no name nor a date. Keats’ friends honored his request to some extent, as the words were included on the stone and no name is given. The full epitaph reads:

This Grave
contains all that was Mortal
of a
Young English Poet
Who
on his Death Bed, in the Bitterness of his Heart
at the Malicious Power of his Enemies
Desired
these Words to be
engraven on his Tomb Stone:
Here lies One
Whose Name was writ in Water.
24 February 1821

9. Good name for a lover of hearty meals : STU

Aaron Rodgers signed with the Green Bay Packers as quarterback in 2005. Aaron has a younger brother Jordan who played football with the Jacksonville Jaguars and the Tampa Bay Buccaneers.

A “drib” is a negligible amount, as in “dribs and drabs”.

“Exodus” is a wonderful novel written by American writer Leon Uris, first published in 1947. The hero of the piece is Ari Ben Canaan, played by Paul Newman in the 1960 film adaptation directed by Otto Preminger.

47. Whistler, but not his mother : ARTIST

James Abbott McNeill Whistler was an American-born painter who spent most of his working life in Britain. His most famous work is the 1871 painting usually referred to as “Whistler’s Mother”. That actual title of the piece is “Arrangement in Grey and Black No. 1”.

“Schmo” (also “shmo”) is American slang for a dull or boring person, from the Yiddish word “shmok”.

“Jimmy” is a variant of the word “jemmy” that is used for a type of crowbar, one associated with burglars back in the 1800s.

The “Mary Poppins” series of children’s novels was written by Australian-born English writer and actress P. L. Travers. Mary Poppins is a magical children’s nanny with a best friend called Bert. In the famous musical film adaptation of the Mary Poppins stories, Poppins is played by Julie Andrews and Bert is played Dick Van Dyke.

9. Good name for a lover of hearty meals : STU

47. Whistler, but not his mother : ARTIST