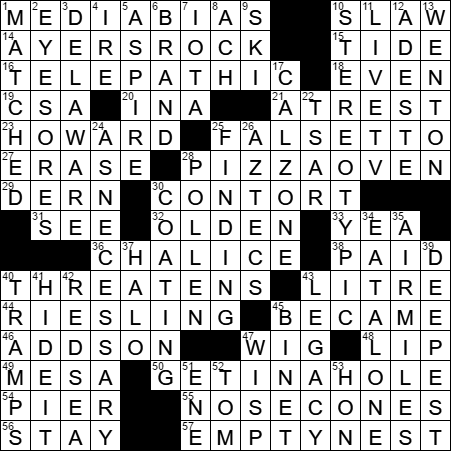 Ayers Rock was discovered by Europeans in 1873, who gave it its name in honor of Sir Henry Ayers who was the Chief Secretary of South Australia at the time. The Aborigines call the landmark Uluru, which is the more accepted name these days.

Ina Garten is an author as well as the host of the cooking show on the Food Network called “Barefoot Contessa”. Garten has no formal training as a chef, and indeed used to work as a nuclear policy analyst at the White House!

Ron Howard sure has come a long way since playing Opie Taylor on “The Andy Griffith Show”. He has directed some fabulous movies including favorites of mine like “Apollo 13”, “The Da Vinci Code” and “A Beautiful Mind”, the latter earning Howard a Best Director Oscar.

Steven Soderbergh first came to international attention as a director at only 26 years old, for his 1989 indie film “Sex, Lies, and Videotape”. Since then, he has directed many box-office hits, such as “Erin Brockovich”, “Traffic” (for which he won a Best Director Oscar) and all of the “Ocean’s 11” films.

Roman Polanski is a Polish film director, and an Oscar winner for directing the 2002 movie “The Pianist”. Polanski has had an eventful life. His pregnant wife, Sharon Tate, was murdered by the Manson family in 1969. In 1977, Polanski was arrested in Los Angeles for sexual assault of 13-year-old girl, and pleaded guilty to having sex with a minor. He fled the country to avoid sentencing, and has mainly lived in France since then.

Bruce Dern is a Hollywood actor with quite a pedigree. Dern is the grandchild of former Utah governor and Secretary of War, George Henry Dern. Bruce’s godparents were Adlai Stevenson and Eleanor Roosevelt!

“Nebraska” is a really interesting 2013 movie starring Bruce Dern as an elderly man who heads to Lincoln, Nebraska to collect a million-dollar sweepstakes prize that is clearly a scam. This one is filmed in black & white, which adds to the mood nicely. I note that a local movie theater here did a one-day showing of a color version.

On the other side of the Atlantic, we use the French spelling for measurements that originated in French, so “metre” for “meter” and “litre” for “liter”.

Petrol is the same thing as gasoline. “Petrol” comes via French from the Latin “petroleum”, itself derived from “petra” meaning “rock” and “oleum” meaning “oil”.

The Riesling grape variety originated in the Rhine region of Germany, and is used to make wines that are often described as fruity and aromatic. The wine generally has a high level of acidity which makes it ideal for aging, with some examples being proclaimed as excellent at over a hundred-years-old.

3. Its only counties are Kent, New Castle and Sussex : DELAWARE

Delaware is the second smallest state in the country in terms of area, but has the fewest counties (3), namely New Castle, Kent and Sussex. Rhode Island, the smallest state, ties with Hawaii as the state with the second-lowest number of counties at five.

The lovely Christmas hymn “Adeste Fideles” (entitle “O Come, All Ye Faithful” in English) was written by one John Francis Wade in the 13th century. Well, he wrote the original four verses, with four more verses being added over time. A kind blog reader pointed out to me that the English translation is in fact a little “off”. The term “adeste” best translates from Latin as “be present, attend”, rather that “come”. The verb “come” appears later in the lyrics in “venite adoremus”, meaning “come, let us worship”.

A calzone is like a pizza but with the dough base folded in half, forming a semicircle.

The former Soviet Union (USSR) was created in 1922, not long after the Russian Revolution of 1917 that overthrew the Tsar. Geographically, the new Soviet Union was roughly equivalent to the old Russian Empire, and comprised fifteen Soviet Socialist Republics (SSRs).

The fine powder known as pollen is basically a flower’s sperm, as it carries a seed plant’s male reproductive cells.

Lake Superior is the deepest of the Great Lakes, and Lake Erie is the shallowest.

The “pig” mentioned in the rhyme isn’t actually a live animal but is actually a small pastry with an apple filling.

40. Points at and yells, perhaps : THREATENS

3. Its only counties are Kent, New Castle and Sussex : DELAWARE

24. When needed : AS NECESSARY

34. What one might do after a broken date : EAT ALONE