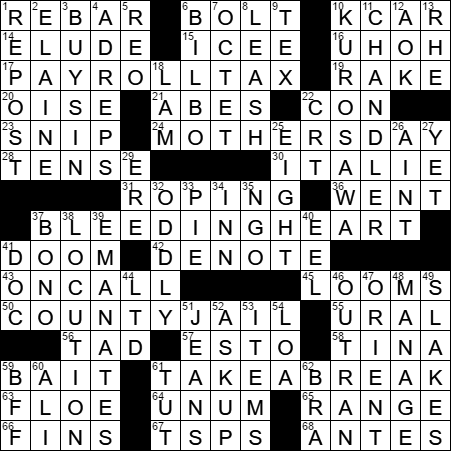 Today’s themed answers each end with a word can TAKE A BREAK, that is often followed by the word BREAK:

Chrysler introduced K-cars in the early 1980s at a time when demand for large cars with V8 engines was plummeting. Post-oil crisis consumers were seeking low-cost, fuel-efficient vehicles, which brought Chrysler to the brink of bankruptcy. It was the economical 4-cylinder, front-wheel drive platform that singlehandedly delivered the company into the profitability within a couple of years. K-cars were designed to carry 6 passengers, on two bench seats. Remember taking a corner a little too fast on those seats, in the days when no one wore seat belts?

Medicare is a the national medical insurance program administered by the US government. The term “Medicare” originally applied to a government program introduced in 1956 that provided coverage for families of those serving in the military. The current Medicare program was introduced by the Johnson administration in 1966, to provide health insurance to anyone aged 65 years or older.

“Rodeo” is a Spanish word that is usually translated as “round up”.

Asian bleeding-heart is a plant in the poppy family with heart-shaped pink and white flowers. It is sometimes called lyre flower or lady-in-a-bath. What imaginative names …!

“Whiskey Tango Foxtrot” is a 2016 film based on a memoir called “The Taliban Shuffle: Strange Days in Afghanistan and Pakistan” by Kim Barker. Tina Fey stars as a TV journalist on assignment as a war correspondent in Afghanistan. Despite the somber setting, “Whiskey Tango Foxtrot” is a comedy-drama. The title is the initialism WTF spelled out using the NATO phonetic alphabet. WTF stands for “what the fudge?!”, or similar …

The character called Elaine Benes, unlike the other lead characters (Jerry, Kramer and George), did not appear in the pilot episode of “Seinfeld”. NBC executives specified the addition of a female lead when they picked up the show citing that the situation was too “male-centric”.

In J. R. R. Tolkien’s fantasy novel “The Hobbit”, the title character is Bilbo Baggins, a hobbit who stumbles across a magical ring and then embarks on a series of adventures.

Otis Chandler took over as publisher of the “Los Angeles Times” in 1960 from his father Norman Chandler. Otis retired from his position in 1980.

61. Rest .. or, literally, what the last word of the answers to starred clues can do : TAKE A BREAK