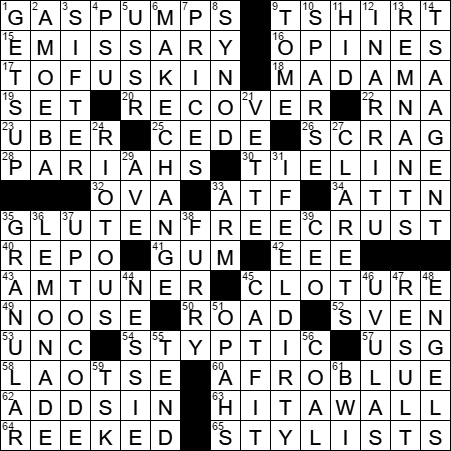 1. Where regular payments are made : GAS PUMPS

T-shirts can be shot out of an air cannon, perhaps at a sports game.

An “emissary” is an ambassador, an agent sent on a mission, usually from one government to another. The term derives from the Latin “emissarius” meaning “that is sent out”.

Tofu skin is a food product that forms on the surface of boiling soy milk. It is also known as yuba.

Puccini’s “Madama Butterfly” is the most-performed opera in the US. The opera that we see today is actually the second version that Puccini produced. The original version was first staged in 1904 at La Scala in Milan where it received a very poor reception. Puccini reworked the piece, breaking the second act into two new acts and making some other significant changes. The opera was relaunched a few months later and it was a resounding success.

23. Its services include water taxis : UBER

A tie line is a connection between extensions of a private telephone system. A tie line may also be called a tie trunk.

Gluten is a protein mixture found in foods processed mainly from wheat. The sticky properties of gluten are used in making bread, giving dough its elasticity and making the final product chewy. “Gluten” is the Latin word for “glue”.

“Cloture” is a parliamentary process used to bring a debate to an early close. The procedure was first used in the French National Assembly, and “clôture” is a French word meaning “ending, conclusion”. The cloture process was introduced into the US Senate in 1917, but there is no equivalent maneuver existing in the US House.

The University of North Carolina (UNC) at Chapel Hill started enrolling students way back in 1795, making it the oldest public university in the country, i.e. the first to enrol students.

54. It stops the bleeding : STYPTIC

A styptic is an antihemorrhagic, a substance that stops bleeding. It works by contracting tissue, and thus sealing injured blood vessels.

Ulysses S. Grant (USG) had been a career soldier when he was elected as the 18th president of the US, and had risen to commander of all the Union armies by the end of the Civil War. Grant served two terms as president, and also made a failed bid for a third term. Grant’s reputation was tarnished by his apparent tolerance of corruption in his administration. On the other hand, Grant worked hard to protect African Americans during Reconstruction after the Civil War, and pursued peaceful relations with Native Americans.

Dream of a land my soul is from
I hear a hand stroke on a drum
Shades of delight cocoa hue
Rich as the night, afro blue

“Consumer Reports” is a monthly magazine that has been published by Consumers Union since 1936. Consumers Union was established as a non-profit organization with the mission to “test products, inform the public, and protect customers.”

The word synod comes from the Greek word for assembly, or meeting. A synod is a church council, usually in the Christian faith.

Alejandro G. Iñárritu is a film director from Mexico City. The years 2014 and 2015 were great for Iñárritu. He won Oscars for Best Director, Best Original Screenplay and Best Picture for “Birdman” in 2014. He won Best Director again the following year, for “The Revenant”.

Joseph L. Mankiewicz was a very successful film director. He won three Oscars for the 1949 movie “A Letter to Three Wives” (Best Director, Best Writing and Best Screenplay), and then won the same “triple” of Oscars the following year, for the 1950 movie “All About Eve”.

A remnant is a small part that’s left over from something larger. The term comes from the Latin “remanour” meaning “to remain”. So, a “remnant” is something “remaining”.

The phrase “the big cheese” doesn’t have its roots in the word “cheese” at all. The original phrase was “the real cheese” meaning “the real thing”, used way back in late 1800s (long before Coke picked it up). “Chiz” is a Persian and Hindi word meaning “thing”, and it’s not hard to see how the expression “the real chiz” would morph into “the real cheese”. Then in early-20th century America, instead of a “real cheese”, the most influential person in a group was labeled as “the big cheese”. And I think that is about the only use of the word “cheese” that is in anyway complimentary!

“Opah” is the more correct name for the fish also known as the sunfish, moonfish or Jerusalem haddock. I’ve seen one in the Monterrey Aquarium. It is one huge fish …

1. Where regular payments are made : GAS PUMPS

23. Its services include water taxis : UBER

54. It stops the bleeding : STYPTIC

37. In line with safety regulations : UP TO CODE