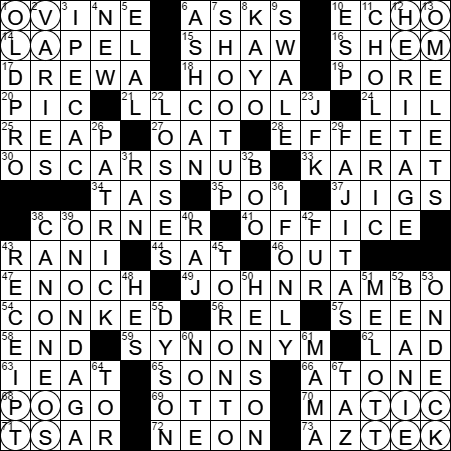 Constructed by: Peter A. Collins

Today’s grid includes four sets of circled letters in each of the CORNERS. Those circled letters spell out types of OFFICE when read in a clockwise direction starting at the top left:

The four offices defined are:

George Bernard Shaw was a very successful Irish playwright. Shaw is the only person to have been awarded both a Nobel Prize for Literature, and an Oscar. He won his Oscar for adapting his own play “Pygmalion” for the 1938 film of the same name starring Leslie Howard and Wendy Hiller. Most people are more likely to have seen the musical adaptation of “Pygmalion” that goes by the title “My Fair Lady”.

Lil’ is a short form of the word “little”.

Something effete is degenerate, infertile, no longer productive. “Effete” comes from the Latin “ex-fetus”, literally “out of offspring”.

A ranee (also spelled “rani”) is a queen or a princess, the female equivalent of a raja in India.

Alfred, Lord Tennyson published his poem “Enoch Arden” in 1864. It tells the tale of Enoch Arden who went to sea in order to support his wife and children. He gets shipwrecked, and is lost for ten years, presumed drowned. When Enoch returns, he finds his wife happily married to another man, a man who had been his lifelong rival. Sad stuff …

“First Blood” was the original of the four “Rambo” films starring Sylvester Stallone as John Rambo, a troubled Vietnam War veteran. I thought “First Blood” was a pretty good film actually, but the sequels were terrible, and way too violent for me. But action all the way …

The word “genuine” is a synonym for “real”.

Timon of Athens was noted for renouncing society, for being someone who despised mankind. Timon started out life as a wealthy man, but he lost all his money by pandering to the needs of his friends. Without money, Timon’s friends deserted him. Timon became rich again when he found a pot of gold, and so his friends sought him out once more. Timon was very embittered and so drove everyone away and lived the rest of his life as a hermit. Centuries after he died, Timon of Athens was to become the title character in “Timon of Athens”, a play by William Shakespeare

What we know today as a pogo stick was invented in Germany by Max Pohlig and Ernst Gottschall. The name “pogo” comes from the first two letters in each of the inventors’ family names: Po-hlig and Go-ttschall.

The Crimean War of 1855-1856 was fought between Russia and an alliance of France, Britain, the Ottoman Empire and Sardinia. One of the most famous engagements of the Crimean War was the 1854 Battle of Balaclava, which involved the disastrous Charge of the Light Brigade.

The Pontiac Aztek is a mid-size crossover SUV that was made by GM from 2001 to 2005. The vehicle was also sold as the Buick Rendezvous. The Aztek was a commercial flop, although it has been getting a bit of a following in recent years as it featured in the hit TV series “Breaking Bad”.

A neophyte is a recent convert to a particular doctrine or practice.

“Choler” is “anger, irritability”. Choler (also “cholera”) was one of the body’s four basic substances of medieval science, the so-called four humors. All diseases were caused by these four substances getting out of balance. The four humors were:

Danica Patrick is a very successful auto racing driver. She won the 2008 Indy Japan 300. making her the only woman to win an IndyCar Series race. Patrick also finished third in the 2009 Indy 500, the highest finish for a woman in that race.

“Fajita” is a Tex-Mex term that refers to grilled meat served on a tortilla. The original Mexican-Spanish term “fajita” is used to describe a small strip of chicken or beef. Nowadays, fajitas are often served on a sizzling platter with the tortillas and condiments on the side.

The Iroquois Confederacy was also known as the Five Nations and was comprised of the Mohawk, Oneida, Onondaga, Cayuga and Seneca nations.

“The Globe and Mail” is a Canadian newspaper based in Toronto and distributed nationwide. The paper is a descendant of “The Globe”, a Toronto publication founded in 1844. “The Globe and Mail” had a significant redesign and relaunch in 2010, a step made necessary I suppose by the global migration to online news reporting.

Jim Henson was a puppeteer, and most famously the creator the Muppets characters. Henson produced his first puppets for a local television station in Hyattsville, Maryland while he was still in high school. As well as the famous Muppet characters, Henson created, operated and voiced the character Yoda in most of the “Star Wars” movies. Henson died from a streptococcal infection in 1990, on the same day that Sammy Davis, Jr. passed away.

Dyson vacuum cleaners do not use a bag to collect dust. James Dyson invented the first vacuum cleaner to use cyclonic separation in 1979, frustrated at the poor performance of his regular vacuum cleaner. As Dyson cleaners do not use bags, they don’t have to deal with collection bags that are blocked with fine dust particles, even after emptying. Cyclonic separation uses high speed spinning of the dust-containing air so that the dust particles are thrown out of the airflow into a collection bin. We have a Dyson now, and should have bought it years ago …

The set of five horizontal line and four spaces used in Western musical notation can be called a staff or stave. Either way, the plural form is “staves”.

38. With 41-Across, corporate status symbol … and a hint to the circled letters : CORNER …

65. Princes, but not princesses : SONS