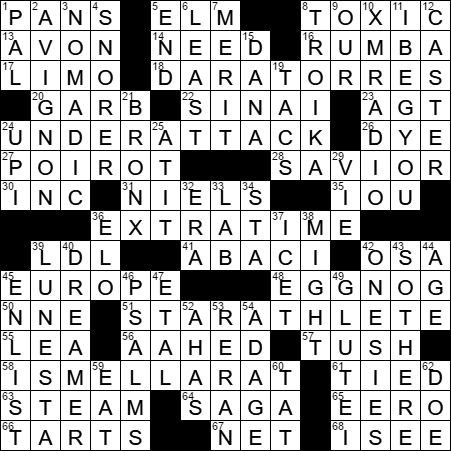 Theme: I Smell a Rat

Each of today’s themed answers includes the hidden word RAT:

“MasterChef” is a cooking competition TV show franchise that originated on the BBC in the UK in 1990. There are now versions of MasterChef made all over the world, from Albania to Vietnam. I quite enjoy the US version of the “MasterChef Junior” manifestation of the show …

Peter Ustinov was a fabulous actor from England. It has to be said though, he was multi-talented and I remember him as a great guest on the talk show circuit.

Orson Welles is perhaps best-remembered in the world of film for his role in 1941’s “Citizen Kane”. In the world of radio, Welles is known for 1938’s famous broadcast of “The War of the Worlds”, a broadcast that convinced many listeners that the Earth was indeed being invaded by aliens.

Albert Finney is a marvelous English actor whose long career has included starring roles in movies such as “Annie” (1982) and “Erin Brockovich” (2000). My favorite of Finney’s performance is perhaps less well known, namely “Two for the Road” (1967) in which he stars opposite the lovely Audrey Hepburn.

“Fast Company” is a business and technology magazine that was launched in 1995.

Niels Bohr was a Danish physicist, who won his 1922 Nobel Prize for his work on quantum mechanics and atomic structure. Later in his life, Bohr was part of the team working on the Manhattan Project that developed the first atomic bomb. Niels Bohr and Albert Einstein had a series of public debates and disputes in the twenties and thirties. Although the two respected each other very highly, they held very different views on quantum theory, different views on the laws of physics at the atomic level. The passage of time has shown that Bohr won out in those debates.

The city of Chihuahua is the capital of the Mexican state of the same name. The city was founded in 1709 by Spanish explorers as a village called El Real de Minas de San Francisco de Cuéllar. However, the current name “Chihuahua” predates the Spanish conquest of Mexico, although the name wasn’t adopted until 1823.

Here’s a list of the world’s continents by population, based on 2016 data:

“Sports Illustrated” is read by 23 million people every week, including a whopping 19% of adult males in the US. And that’s every week, not just the swimsuit issue …

“Troika” is a Russian word meaning “set of three”. “Troika” can apply to a sled or carriage drawn by three horses, or to a folk dance between one man and two women. The term might also apply to a triumvirate of political leaders.

“Our Song” is a song recorded by Taylor Swift in 2006 that Swift wrote during her freshman year for a high school talent show.

Tic Tacs aren’t American candy (as I always mistakenly believed). Tic Tacs are made by the Italian company Ferrero, and were introduced in 1969.

The New York City borough known as the Bronx takes its name from the Bronx River that runs through it. The river was named after Jonas Bronck, an early immigrant to the Dutch colony of New Netherland. Bronck’s farm gave rise to the name “Broncksland” and “Bronck’s River”.

The city of Yonkers is built on land that was granted to Adriaen van de Donck in 1645. Van der Donck was known by locals as the “young gentleman” or “Johnkeer” in Dutch. It is the word “Jonkheer” that gives us the name “Yonkers”.

There are three gluteal muscles in the human body, the largest of which is the gluteus maximus. It’s the gluteus maximus which really dictates the shape and size of the human buttocks. In evolutionary terms, the human “glutes” (also “glutei”) are larger than those in related species because they play a big role maintaining our erect posture.

24. Subjected to harsh criticism : UNDER ATTACK

44. What candles may signify : AGE