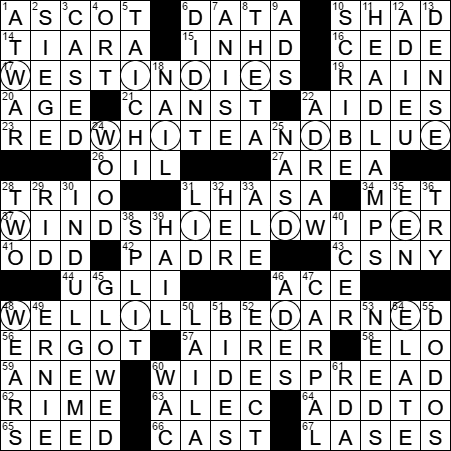 Each of today’s themed answers includes the letters W-I-D-E, in that order, and SPREAD out among the other letters in that answer:

An Ascot tie is a horrible-looking (I think!), wide tie that narrows at the neck, which these days is only really worn at weddings. The tie takes its name from the Royal Ascot horse race at which punters still turn up in formal wear at Ascot Racecourse in England.

“The oldest beauty pageant still operating in the US is the Miss America contest. The Miss America beauty pageant started out as a marketing ploy in the early twenties to attract tourists to the Atlantic City boardwalk after Labor Day. Today, contestants must be between 17 and 24 years of age. Before those limits were introduced, Marian Bergeron won the 1933 title at only 15 years of age.

Give all thou canst; high Heaven rejects the lore
Of nicely-calculated less or more;

A “vicinity” is an area surrounding a place, ultimately deriving from the Latin “vicus” meaning “group of houses, village”.

You may have seen the 2008 movie “Flash of Genius”, which outlined the troubles Robert Kearns (played by Greg Kinnear) had in making money from his invention of the intermittent windshield wiper. Well, Mary Anderson developed the original wiper and received a patent in 1903. She didn’t make any money either …

The San Diego Padres were founded in 1969. The Padres took their name from a Minor League team that had been in the the city since 1936. The name is Spanish for “fathers” and is a reference to the Franciscan Friars from Spain who founded San Diego in 1769.

“Woodstock” is a song that was written and recorded by Joni Mitchell about the the 1969 Woodstock Festival. Joni Mitchell opted not to attend the festival, and instead wrote the song in a New York City hotel room while watching coverage of the event on television. Crosby, Stills, Nash & Young recorded a cover version of “Woodstock” in 1970 that has proved to be even more successful that Mitchell’s original.

The ugli fruit is a hybrid of an orange and a tangerine, first discovered growing wild in Jamaica where most ugli fruit comes from today. “UGLI” is a trademark name that is a variant of “ugly”, a nod to the fruits unsightly wrinkled rind.

Ergot is a fungus, or actually a group of fungi, that cause disease in rye and related plants. If human eat ergot-contaminated grain, a condition called ergotism can result. Ergotism is the result of consumption of alkaloids produced by the fungi, alkaloids that can cause seizures and manic behavior. It has even been suggested that the hysteria exhibited by the Salem “witches” was perhaps caused by the ingestion of ergot-contaminated rye.

“Don’t Bring Me Down” is the biggest hit the Electric Light Orchestra (ELO) had in the US. The song was dedicated to NASA’s Skylab, which reentered the earth’s orbit in 1979, the same year the song was released.

Ouzo is an aperitif from Greece that is colorless and flavored with anise. Ouzo is similar to pastis from France and also has a flavor like sambuca from Italy.

Over-the-counter (OTC) trading of stocks is a way of trading directly between two parties, as opposed to exchange trading in which trading occurs in an exchange.

In ten pin bowling, a split takes place when the number-one pin (headpin) is a knocked down with the first ball and two or more non-adjacent pins are left standing. The most difficult split to deal with is the infamous 7-10 split, where just the rear pins at the extreme right and left remain standing.

The carpal tunnel is a passageway connecting the palm of the hand to the forearm through the wrist. The passageway contains bones, tendons and nerves. It is a narrow canal and so any swelling of the tendons can place pressure on the main nerve in the passageway. This compression of the medial nerve is known as carpal tunnel syndrome.

15. Broadcast with greater image resolution, as TV shows : IN HD

60. Extensive … and what’s literally seen in this puzzle’s circles : WIDESPREAD

3. Scoped out with bad intentions : CASED