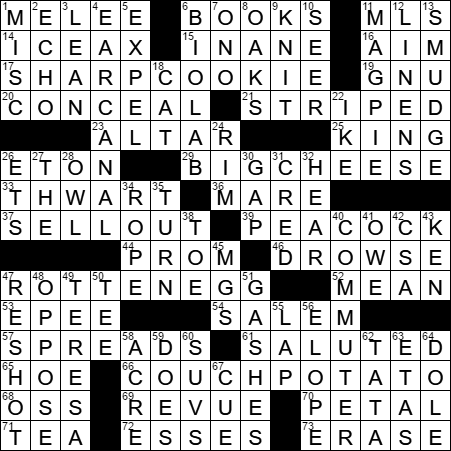 Theme: … To a Food Critic

Each of today’s themed answers are familiar expressions that refer to a food item, and are clued with the words “… to a food critic”.

The LA Galaxy is one of the ten charter clubs of Major League Soccer (MLS). The team is known for signing some high-profile players from more established leagues. England star and celebrity David Beckham played for the Galaxy from 2007 to 2012.

The adjective “asinine” means “stupid, obstinate”, and comes from the Latin for “like an ass”.

The phrase “the big cheese” doesn’t have its roots in the word “cheese” at all. The original phrase was “the real cheese” meaning “the real thing”, used way back in late 1800s (long before Coke picked it up). “Chiz” is a Persian and Hindi word meaning “thing”, and it’s not hard to see how the expression “the real chiz” would morph into “the real cheese”. Then in early-20th century America, instead of a “real cheese”, the most influential person in a group was labeled as “the big cheese”. And I think that is about the only use of the word “cheese” that is in anyway complimentary!

The Salem witch trials were a series of hearings held in 1692 and 1693 in colonial Massachusetts, most famously in Salem. As a result of mass hysteria, twenty people were convicted of practicing witchcraft and were executed. The events were deemed to be a terrible injustice almost immediately. As early as 1696, there was a legal ruling by the Massachusetts General Court that referred to the outcome of the trials as a tragedy. In 2001, the massachusetts legislature officially exonerated all of those convicted.

Tetley was founded by Joseph Tetley in Yorkshire in 1837. Joseph and his brother used to sell salt door-to-door from a pack horse and started to distribute tea the same way. They became so successful selling tea that they relocated to London. Notably, Tetley’s was the first company to introduce tea bags in the UK, back in 1953.

There are two letters S (ess) ending the word “class”.

The first white sale took place in January of 1878 in a Philadelphia department store. It was called a white sale because it was only bed linens (which were all white) that were discounted. Over time, white sales have evolved to include almost any household items.

Mamie Eisenhower has to have been one of the most charming of all the First Ladies of the United States. Ms. Eisenhower suffered from an inner ear complaint called Ménière’s disease which caused her to lose her balance quite often. Because she was unsteady on her feet there were unfounded rumors floating around Washington that Ms. Eisenhower had a drinking problem. People can be very unkind …

The phrase “hear! hear!” is an expression of support that is perhaps more commonly used in the UK than on this side of the Atlantic. The phrase evolved from “Hear him! Hear him!”, which was the original utterance used in the UK parliament in the 17th century.

Clue is board game that we knew under a different name growing up in Ireland. Outside of North America, Clue is marketed as Cluedo. Cluedo was the original name of the game, introduced in 1949 by the famous British board game manufacturer Waddingtons. There are cute differences between the US and UK versions. For example, the man who is murdered is called Dr. Black (Mr. Boddy in the US), one of the suspects is the Reverend Green (Mr. Green in the US), and the suspect weapons include a dagger (a knife in the US), a lead pipe (lead piping in the US) and a spanner (a wrench in the US). I think it’s a fabulous game, a must during the holidays …

Barbie’s male counterpart doll is Ken, and Ken’s family name is Carson. Barbie’s full name is Barbie Millicent Roberts. When Ken was introduced in 1959, it was as Barbie’s boyfriend. In 2004 it was announced that Ken and Barbie were splitting up, and needed to spend quality time apart. Soon after the split, Barbie “met” Blaine, a boogie boarder from Australia.

My neighbor used to keep his MG Midget roadster in my garage (away from his kids!) back in Ireland many moons ago. The Midget was produced by the MG division of the British Motor Corporation from 1961 to 1979, with the MG abbreviation standing for “Morris Garages”.

Mother Teresa was born in 1910 in the city that is now called Skopje, the capital of Macedonia. At birth she was given the names Agnes Gonxha Bojaxhiu (“Gonxha” means “little flower” in Albanian). She left home at the age of 18 and joined the Sisters of Loreto, and headed to Loreto Abbey in Rathfarnham in Dublin, Ireland in order to learn English. Her goal was to teach in India, and English was the language used there for instruction by the nuns. After Mother Teresa passed away in 1997 she was beatified by Pope John Paul II, a step on the road to canonization. In order for her to be beatified there had to be documented evidence of a miracle that was performed due to her intercession. The miracle in question was the healing of a tumor in the abdomen of a woman due to the application of a locket containing a picture of Mother Teresa. Documentation of a second miracle is required for her to be declared a saint. The canonization process seems to well underway, with Pope Francis recognizing a second miracle in December 2015.

“SUV” is an initialism standing for sports utility vehicle, and is a term that was introduced by our marketing friends. Using the phrase “sports utility vehicle” was a very clever way to get us to pay a lot of money for what was essentially a station wagon on a truck chassis, or at least it was back then.

3. With the fat trimmed off : LEAN

11. Member of the crow family : MAGPIE