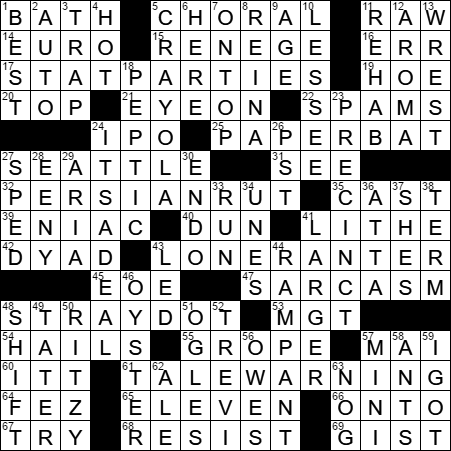 14. It replaced the Cypriot pound : EURO

The Cypriot pound was named for the pound sterling, which the British introduced on the island in 1879. The Cypriot pound broke parity with the pound sterling some twelve years after Cyprus gained independence from the UK in 1960. Today’s Republic of Cyprus replaced the Cypriot pound with the euro in 2008. However, the breakaway Turkish Republic of Northern Cyprus continues to use the Turkish lira, which was introduced following a unilateral declaration of independence for that part of the island in 1983.

Back where I come from, bachelor parties are called stag parties, and bachelorette parties are known as hen parties.

An Initial Public Offering (IPO) is the very first offer of stock for sale by a company on the open market. In other words, an IPO marks the first time that a company is traded on a public exchange. Companies have an IPO to raise capital to expand (usually).

The Washington city of Seattle was founded on a site that had been occupied by Native Americans for over 4,000 years before the first Europeans arrived in the area. The name “Seattle” was chosen in honor of Duwamish Chief Seattle, who had a reputation for welcoming white settlers.

The acronym ENIAC stands for Electronic Numerical Integrator and Calculator (although many folks insist that the C was for “Computer”). ENIAC was introduced at the University of Pennsylvania in 1946, at which time it was the first general-purpose electronic computer, and dubbed “Giant Brain” by the press. Its original purpose was the calculation of artillery firing tables, but it ended up being used early on to make calculations necessary for the development of the hydrogen bomb. Given its uses, it’s not surprising to hear that development of ENIAC was funded by the US Army during WWII.

“To dun” is to insist on payment of a debt. The etymology of the term is unclear, with one suggestion that it dates back to a famous debt collector in London named Joe Dun.

48. Imperfection in a pointillist painting? : STRAY DOT (from “stray dog”)

A fez is a red cylindrical hat worn mainly in North Africa, and by Shriners here in the US. The fez used to be a very popular hat across the Ottoman Empire. The etymology of “fez” is unclear, although it might have something to do with the Moroccan city named Fez.

A “precinct” is a defined area, often in a city, that is established for administrative purposes. For electoral purposes in the US, the term “precinct” is sometimes used interchangeably with “election district”. Famously, the city of New York uses the term “precinct” for its police stations. The term comes from the Medieval Latin word “precinctum” meaning “enclosure, boundary line”.

The University of California, Berkeley (Cal) is the most difficult public university to get into in the world. The school opened in 1869 and is named for Anglo-Irish philosopher George Berkeley.

“Nessun dorma” has to be the tenor aria that most tugs at the heart strings. It is taken from the last act of Puccini’s opera “Turandot”, and translates as “None shall sleep”. Back in my part of the world, “Nessun dorma” became a hit in the popular music charts, with a version by Pavarotti being used as the theme song to the 1990 FIFA World Cup in Italy. No other classical recording has ever done better in the charts.

No one really knows the etymology of the word “posh”. The popular myth that POSH is actually an acronym standing for “Port Out, Starboard Home” is completely untrue, and is a story that can actually be traced back to the 1968 movie “Chitty Chitty Bang Bang”. The myth is that wealthy British passengers travelling to and from India would book cabins on the port side for the outward journey and the starboard side for the home journey. This trick was supposedly designed to keep their cabins out of the direct sunlight.

“I Got Rhythm” is a song composed by George and Ira Gershwin in 1930 for the musical “Girl Crazy”. The song was performed by Ethel Merman in the original production on Broadway. “I Got Rhythm” makes another appearance in a George Gershwin work, in the 1951 musical film “An American in Paris”. Gene Kelly sang the song in the movie, while tap-dancing.

14. It replaced the Cypriot pound : EURO

47. Feature of many negative reviews : SARCASM

48. Imperfection in a pointillist painting? : STRAY DOT (from “stray dog”)