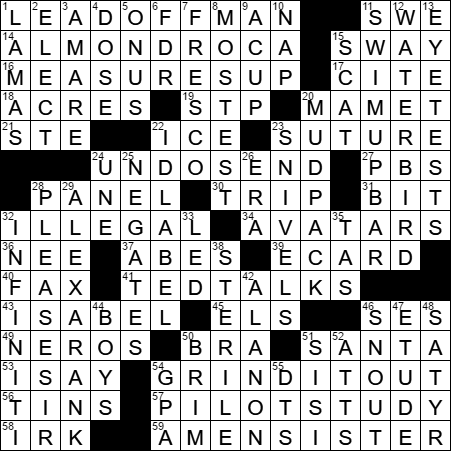 1. One who may start a rally : LEADOFF MAN

STP is a brand name for automotive lubricants and additives. The name STP comes from “Scientifically Treated Petroleum”.

AutoZone is the second-largest retailer of aftermarket automotive parts in the US (after Advance Auto Parts).

David Mamet is best known as a playwright. He won a Pulitzer for his 1984 play “Glengarry Glen Ross”. Mamet is also a successful screenwriter and received Oscar nominations for the films “The Verdict” (1982) and “Wag the Dog” (1997).

Hannibal Lecter is a character created by author Thomas Harris, first appearing in his novel “Red Dragon”. Lecter also features prominently in “Red Dragon’s” famous sequel “The Silence of the Lambs”, and even more so in the third book, “Hannibal Rising”. The latter title is a “prequel” exploring Lecter’s childhood and development into a serial killer. Famously, Lecter was portrayed in the 1991 film version of “The Silence of the Lambs” by Welsh actor Anthony Hopkins. Hopkins also played Lecter in 2001’s “Hannibal” and in 2002’s “Red Dragon”. Lector was also played by Brian Cox (“Manhunter” – 1986), by Gaspard Ulliel (“Hannibal Rising” – 2007), and by Mad Mikkelsen (“Hannibal” – a TV series).

Gmail users (like me) have the advantage of a 10-send grace period in which one can decide to undo the send command for a specific email. I like that “undo send” feature …

The Public Broadcasting Service (PBS) was founded in 1970, and is my favorite of the broadcast networks. I love PBS’s drama and science shows in particular, and always watch the election results coming in with the NewsHour team.

Expedia is one of the largest Internet-based travel companies, and has a site where you can book airline tickets and reserve hotel rooms and rental cars. I use Expedia a lot because I am an AARP member, and the AARP Travel website is powered by the Expedia search engine. In my travels I’ve found by comparison shopping that the AARP Travel site often has the best prices for hotel rooms.

Jacquie Lawson is a British illustrator who created an animated Christmas card in 2000 that she e-mailed to some friends. The Internet being what it is, over the subsequent weeks Lawson received requests from hundreds of people all over the world for more e-cards. Two years later, she launched her own e-card service at jacquielawson.com.

The acronym “TED” stands for Technology Entertainment and Design. TED is a set of conferences held around the world by a non-profit group called the Sapling Foundation. The conference subjects are varied, and the meetings are often led by big names such as Bill Clinton, Al Gore, Bill Gates and Jane Goodall. The Sapling Foundation then makes recordings of the conferences available for free online with the intent of disseminating the ideas globally. These conferences are known as “TED Talks”.

Isabel Marant is a French fashion house that is best-known today for its line of shoes, although the house was founded in 1994 to offer knitwear items.

The Circus of Nero was also called the Circus of Caligula, as its construction was started by Caligula and finished by Nero. This particular Roman circus was the site of the first state-sponsored martyrdoms of Christians, in 65 AD. The martyrs were mainly executed by crucifixion, and some believe that St. Peter met his fate at the site.

President Roosevelt was a major driver in the founding of the National Foundation for Infantile Paralysis. The Foundation’s most successful fund raising campaign was to encourage the public to just send a dime to support the charity, so that even before the Foundation officially changed its name, the public were already calling it March of Dimes. After President Roosevelt passed away in office, Congress passed legislation calling for a new design for the dime, one featuring the image of FDR. The Roosevelt dime was introduced in 1946, on the day that would have been the President’s 64th birthday.

A “fresco” is a painting created on a moist plaster, usually on a wall or ceiling. The plaster is “freshly” laid when the image is created, and “fresco” is the Italian for “fresh”.

“Vogue” magazine has been published an awfully long time, with the first issue appearing in 1892. Over the decades the magazine has picked up a lot of criticism as well as its many fans. Famously, an assistant to the editor wrote a novel based on her experiences working with the magazine’s editor, and called it “The Devil Wears Prada”.

Joseph Stalin was Soviet Premier from 1941 to 1953. Stalin’s real name was Ioseb Besarionis dze Jughashvili. Not long after the Bolshevik Revolution of 1903 he adopted the name “Stalin”, which is the Russian word for “steel”.

Alexa Internet is a company providing web traffic data and analytics. Alexa was founded in 1996, and acquired by Amazon.com in 1999. The company gets its tracking data from users who have downloaded the Alexa toolbar and installed it in their web browsers. As well as providing the usual toolbar features (a search box, popup blocker, etc.), the Alexa toolbar provides the Alexa ranking for sites that the user visits, which I guess is a measure of a site’s popularity.

Al-Anon and Alateen are fellowships of relatives and friends of alcoholics. Alateen specifically supports teens who are affected by another’s drinking, whereas Al-Anon focuses on people of all ages.

The association of the colors pink with girls and blue with boys is a relatively new concept, one that started to be established in the 1940s. One reason for the “fixing” of color associations with genders at that time was the invention of chemical dyes that could survive hot washes. Prior to this, baby clothes were made in white so that they could be washed frequently without fading.

The hit 1995 film “Babe” was produced and filmed in Australia. The movie is an adaptation of a 1983 novel called “The Sheep-Pig” written by Dick King-Smith. “Babe” was a smash hit at the box office and was extremely well received by the critics. The film was nominated for the Best Picture Oscar, but lost out to “Braveheart”. However, it did win the Oscar for Best Visual Effects by beating out “Apollo 13”, which was an amazing feat, I’d say…

Panama hats are also known as Jipijapas, named for a town in Ecuador (and not Panama, surprisingly) that was a major player in the hat trade.

The episodes of delirium that can accompany withdrawal from alcohol are called Delirium Tremens (the DTs). The literal translation of this Latin phrase is “trembling madness”.

1. One who may start a rally : LEADOFF MAN