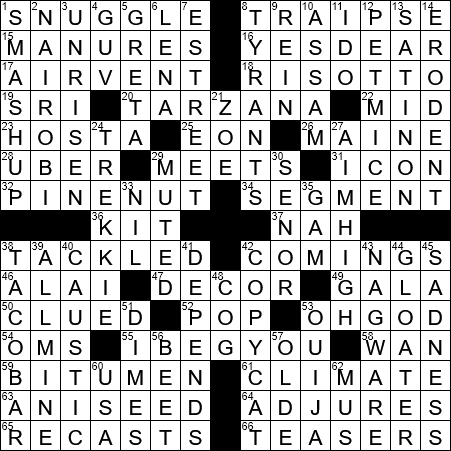 Risotto is an Italian rice dish that is usually served as a first course in Italy, but as a main course here in North America.

Tarzana is an affluent neighborhood in the city of Los Angeles. The community was developed on the site of a former ranch that was owned by author Edgar Rice Burroughs. Burroughs of course wrote the popular “Tarzan” series of novels, and named his property Tarzana Ranch. Sadly, Tarzana’s history includes racial segregation and privilege for the white population. This was instigated by Burroughs himself, who marketed the community he developed back in the 1920s using British imperial themes.

The New York Giants (NYG) football team play their home games in MetLife Stadium in East Rutherford, New Jersey, a stadium shared with the New York Jets (NYJ). The Jets are the only team remaining from a group of five that joined the league in 1925. For many years, the Giants shared team names with the New York Giants MLB team, before the baseball franchise moved to San Francisco after the 1957 season.

That would be ears popping.

“Oh, God!” is a comedy movie that was released in 1977. The great George Burns plays the title role (God!) with John Denver co-starring. George Burns was the big success in the cast, and he alone reprised his role in two sequels in the 1980s.

Our word “adjure” comes from the Latin “adjurare”, meaning “to swear to”. We use to the term “adjuration” to mean an earnest entreaty or plea.

Addis Ababa is the capital city of Ethiopia. The city is relatively young, having being founded in 1886 by Emperor Menelik II. Addis Ababa holds an important position within the nations of Africa as it is home to many international organizations that are focused on the continent.

Greta Scacchi is an actress from Italy who now lives in Australia. Scacchi is popular on the European movie circuit as she is fluent in English, German , French and Italian.

The Lena is in Siberian, and is the third-longest river in Asia. It rises in the Baikal Mountains in the south, and runs almost 2,800 miles to empty into the Laptev Sea in the Arctic Ocean.

7. Where the Boss’ band once rehearsed : E STREET

Assam is a state in the very northeast of India, just south of the Himalayas. Assam is noted for its tea as well as its silk.

24. Any one of the male “Big Bang Theory” main characters : TREKKIE

La Mancha is a region in Spain, a plateau lying south of Madrid. The area became famous after publication of the novel “Don Quixote de La Mancha” by Miguel de Cervantes.

Nagware is software that’s distributed for free, but there’s a persistent and annoying reminder to purchase a license when using the product.

The Mercury dime was also called the Winged Liberty Head dime, and was minted from 1916 to 1945. The coin is so called because it bears the image of a young Liberty wearing a winged cap, an image that is often mistaken for the Roman god Mercury.

Folic acid is also known as vitamin B9. Folic acid occurs in the human body as folate, a substance essential in the synthesis and repair of DNA.

65. Gets new players for : RECASTS

7. Where the Boss’ band once rehearsed : E STREET

13. Attended informally : SAT IN ON

24. Any one of the male “Big Bang Theory” main characters : TREKKIE